10 YEARS INTERNATIONAL JUDO TOURNAMENT FOR POLICE, ARMY AND OTHER FORCES 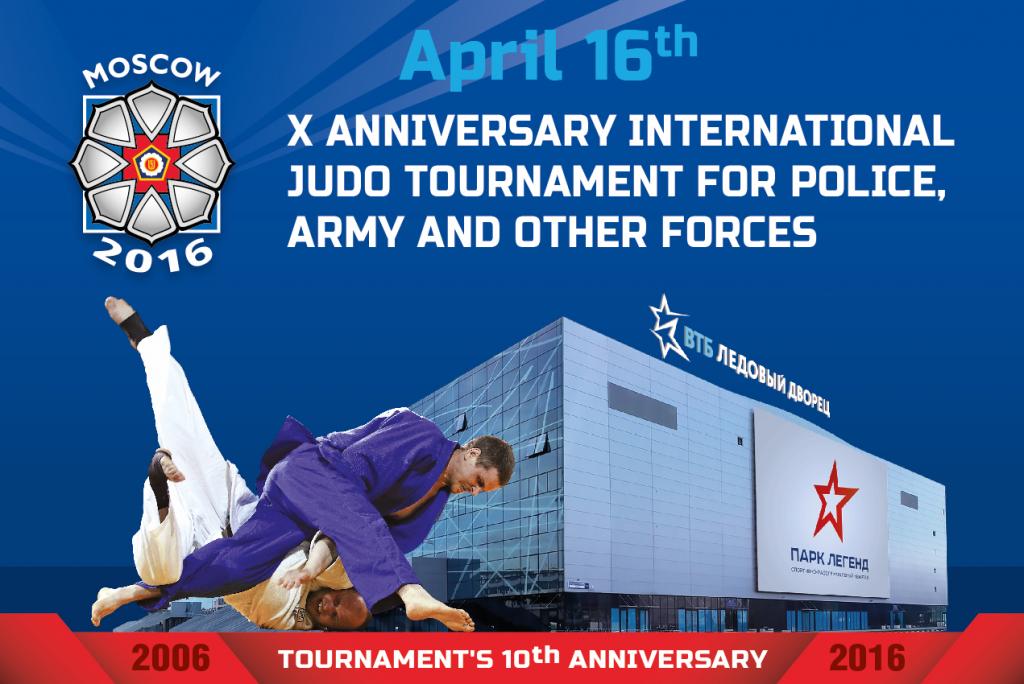 On April 16, 2016 in Moscow the X Anniversary International Judo Tournament for police, army and other forces will be held. 15 teams will take part in the competition. The tatami will welcome police, military and rescue officers from Austria, Belarus, Germany, Hungary, Japan, Lithuania, Russia, Tajikistan and the United Kingdom. Each team will consist of 5 members in different weight categories: 66kg, 73kg, 81kg, 90kg and +90kg.

Over the years of the tournament execution the team of Ministry of Internal Affairs of Russia remains an absolute leader, which has never lost its champion’s title. In 2015, Russian police have won the finals down the representatives of Japan. The bronze medals were won by the teams of the Federal Penal Service of Russia and the Russian Interior Ministry troops.

Every year the organising committee of the tournament is implementing a comprehensive charity programme “We Remember” to provide targeted assistance to families of law enforcement officers killed in the line of duty. Over these years, the organising committee has managed to financially support families of more than 500 heroic dead. In 2016 this tradition will be continued.

History of the competitions started in 2007 when, according to the initiative of the National Veteran Judo Union of Russia the first team tournament for police, army and other forces was held in Moscow. Competitions have caused a public outcry and become a tradition. In 2010 the tournament gained the international status and was included into the official EJU calendar. Today the competitions are among the main events in the field of sports for police, military and rescue officers from many countries.

On April, 15 in the lead-up to the Anniversary Tournament a joint meeting of the IJF and EJU Commissions on police and army judo development will be held. Deputy Minister of the MIA of Russia Mr. Igor Zubov and Moscow Police Chief Mr. Anatoly Yakunin will take part in the joint meeting. The session chaired by the President of the International Judo Federation Mr. Marius Vizer will for the first time take place in a historical building of the Moscow Police, and will be dedicated to the role of judo in professional physical training of police and army officers. Amongst the participants of the event are: President of the European Judo Union Mr. Sergey Soloveychik, President of the Russian Judo Federation Mr. Vasily Anisimov, President of the National Veteran Judo Union of Russia Mr. Pavel Balsky, Chairman of the Military and Police Commission of International Judo Federation, First Vice-President of National Veteran Judo Union of Russia, police major-general of Internal service Mr. Vladimir Gazizov, and other police and army representatives from different countries. As part of the conference there will be held an open training of MIA officers, who will compete for leadership in the X Anniversary International Judo Tournament for police, army and other forces on April, 16th.