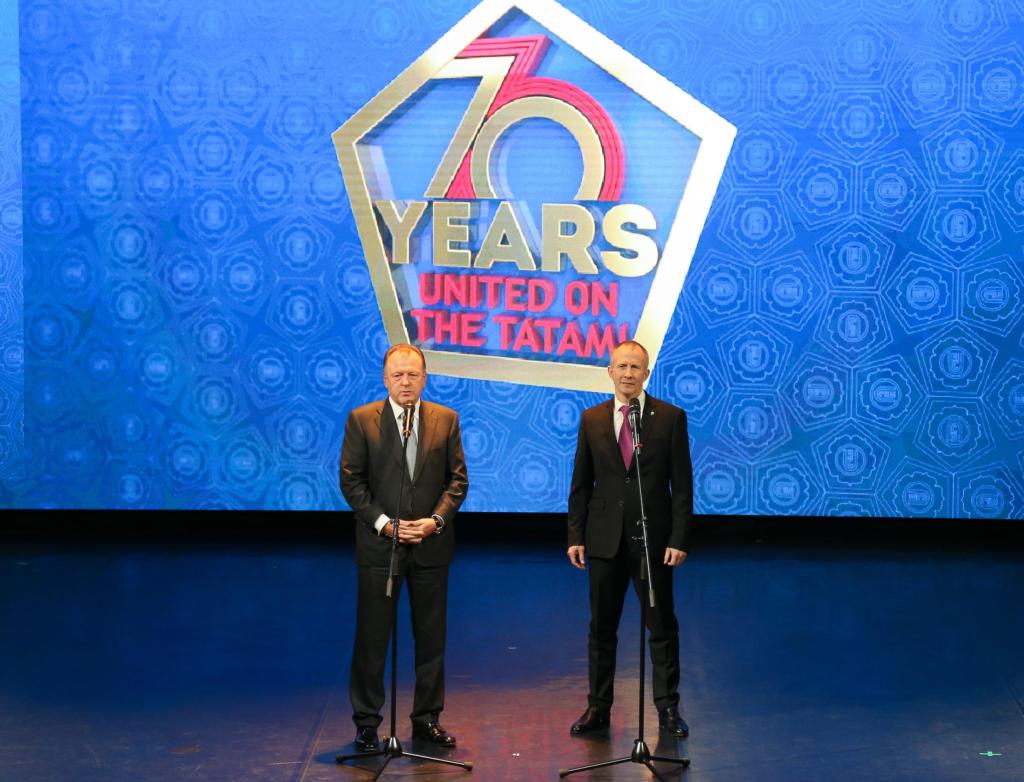 The European Judo Union (EJU) was founded on 28th July 1948 in London. It is a non-political and a non-profit organisation that represents one of the five continental unions inside the International Judo Federation (IJF). The EJU is composed of 51 Member National Federations or Associations officially recognized through their National Olympic Committees. As a Continental Union inside IJF, the EJU in charge of implementing the policies of the IJF and the International Olympic Committee (IOC) and It does not discriminate on the grounds of race, religion, gender or politics.

Judo was created in 1882 by Professor Jigoro Kano. As an educational method derived from the martial arts, judo became an official Olympic sport in 1964. Judo is a highly codified sport in which the mind controls the expression of the body and is a sport which contributes to educating individuals. Beyond competitions and combat, judo involves technical research, practice of Kata, self-defence work, physical preparation, sharpening of spirit. Judo is the way of the highest or most efficient use of both physical and mental energy.

Through training in the attack and defence techniques of judo, the practitioner nurtures their physical and mental strength, and gradually embodies the essence of the Way of Judo. Thus, the ultimate objective of Judo discipline is to be utilized as a means to self-perfection, and thenceforth to make a positive contribution to society. As a discipline derived from ancestral traditions, judo was designed by its Master Founder as an eminently modern and progressive activity.

The affairs of the EJU are run from the EJU administrative Head Office at the body’s headquarters in Vienna, Austria. The Head Office is responsible for the organisation, management and direction of the administration. The EJU President maintains a Presidential Office currently located in Moscow, Russia. The EJU is incorporated under the Second Schedule of Chapter 16 of the Laws of Malta. The European Judo Foundation was established in 1999 to popularise our sport and to support competitors and countries to achieve successful results

The EJU is governed by the Team of President and EC members elected every 4 years at the EJU Congress. The current composition of the Executive Board elected in December 2020.

The EJU Executive Committee (EC) consists of the President, three Vice-Presidents, the General Secretary, the General Treasurer and  Board of Directors managing Sport, Refereeing, Education and Marketing commissions.

Members of the commissions and sectors are involved in shaping EJU policy across the broad range of EJU responsibility. The commissions discuss a variety of issues relating to medical, refereeing, finance and competitions, and submit advice, proposals and recommendations to the EJU Executive Committee, which may also delegate some of its duties to a commission. EJU commissions and expert panels have an advisory function, unless the EJU Executive Committee grants them decision-making powers.

Members
There are currently 51 member nations of the EJU with more than 2.2 Million active judoka. Membership coincides for the most part with recognition as a sovereign country in Europe. Some EJU members are transcontinental states (Azerbaijan, Georgia, Turkey and Russia) and others are considered part of Europe both culturally and politically (Armenia, Cyprus, Israel).

Every year the EJU gathers its member federation presidents, partners and honorary guests at the Festive Gala Dinner to cherish the best athletes, coaches, referees, organisers of EJU events and other contributors to the judo development in Europe. For more information please visit the Wikipedia page of the EJU.

The EJU is incorporated under the Second Schedule of Chapter 16 of the Laws of Malta. The European Judo Foundation was established in 1999 to popularise our sport and to support competitors and countries to achieve successful results.

The official EJU calendar consists of more than 50 events per year featuring Olympic Qualification events, prestigious championships and sport tournaments, education seminars for coaches and referees, Judo Festival for judo lovers of all ages and levels.

All member federations of EJU and Team of Executive Committee are working hard to keep the level of the leading Continental Union of judo. The EJU is proud of 4 Olympic champions and 25 medallists at the last Olympic Games in Rio de Janeiro.

The motto of the EJU is “Judo – more than sport” so in addition to the vast event calendar the EJU is offering different activities as a means of support to its member federations.