100% Gold for Japan today in Vienna 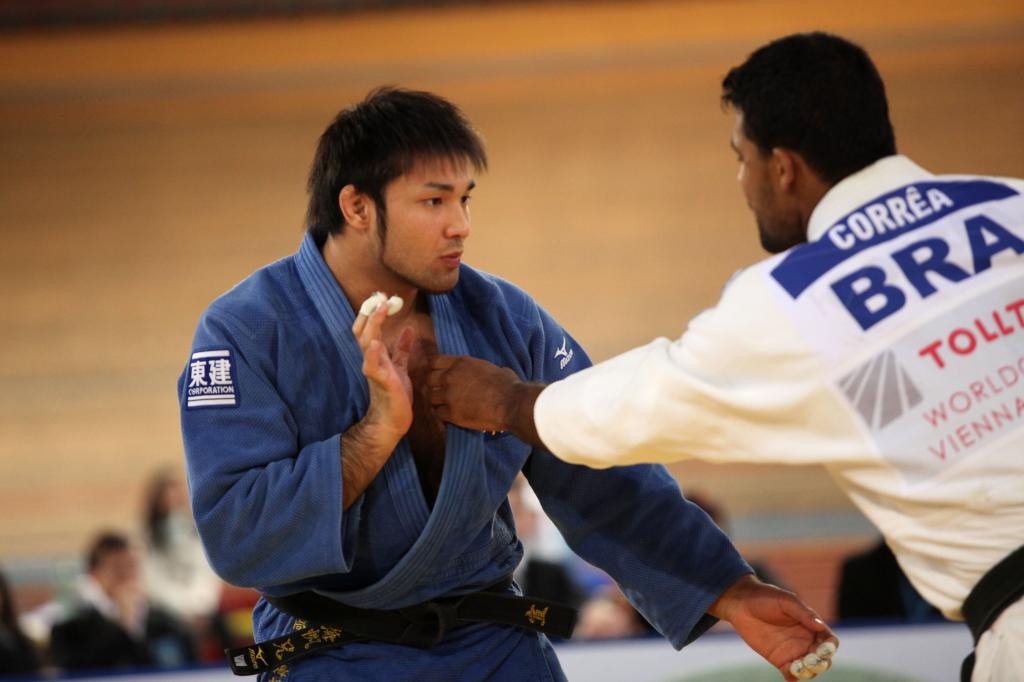 The Japanese men have won all categories at today’s World Cup in Vienna. Yesterday Hiroyuki Akimoto already won the U73kg weight class which made Rok Draksic (SLO) the only European winner in Vienna. Two year’s ago Japan won two weight categories, which may say something about the new rules, also in conjunction to Japan’s results at previous World Cups and Grand Slam of this year.

U81kg Takahiro Nakai defeated Tom Reed, who was actually quite happy with this result. He lost the gold, but won the silver for Britain, the country that needs a success so badly. Britain only won three World Cup medals this year, including the bronze for Matthew Purssey today U90kg.
Nakai beat Francesco Bruyere (ITA) in the semi final, but didn’t have the most impressive opponents today.
Bruyere finished third together with Laszlo Csoknyai (22 years) from Hungary who won his first World Cup medal. Tom Reed won his third medal, but lost his second final after losing last year’s World Cup in Birmingham.

U90kg Daiki Nishiyama beat Ludovic Gobert with waza-ari in the final. Nishiyama is a youngster and won the bronze at the junior World Championships last year. But his age didn’t prevent him from beating 2007 World Champion and double Olympic medalist Tiago Camilo with ippon. Tiago lost to Purssey from the bronze. It was a long time ago since Purssey won a World Cup medal. But Purssey did win bronze in Vise (BEL) some weeks ago, so he’s in a good shape for the European Championships qualification.
Nishiyama could enjoy the presency of Marius Vizer who joined the medal ceremony together with Austrian President Hans Paul Kutschera.

In the U100 kg category it was Kaihan Takagi (pictured) who was the strongest today, conforming this to win the final of 2007 World Champion Luciano Correa (BRA). But Takagi had already beaten World Championships medalist Ramadan Darwish (EGY) and veteran Ariel Zeevi, who both finished third today.
Speaking about veterans, Austrian Veteran Franz Birkfellner, now 33 years, returned on the tatami after one year but lost his first fight.
Another well known judoka, Zurab Zviadauri (GEO) won his first match, but lost to Swedish Martin Pacek. The 28-year old Olympic Champion of Athens (U90kg) fought in the U100 kg class, where also Georgian 2008 Olympic Champion Irakli Tsirekidze made a more successful comeback last week in Paris.
19-Year old Takagi won his first World Cup in his career and is again a new kid on the block to compete with Takamasa Anai in this strong weight category.
In today’s heavy weight category Hiroki Tachiyama was able to beat Brazilians Walter Santos as he got penalized three times. Tachiyama however already beat Olympic Champion Naidan Tuvshinbayar in the quarter final
Last week Tuvshinbayar lost to Japanese Daiki Kamigawa, who today lost in the second round to strong Egyptian Islam El Shahaby.

Next week the European tour continues in Düsseldorf for the IJF Grand Prix.