17 COUNTRIES STEPPED ONTO PODIUM IN ATHENS 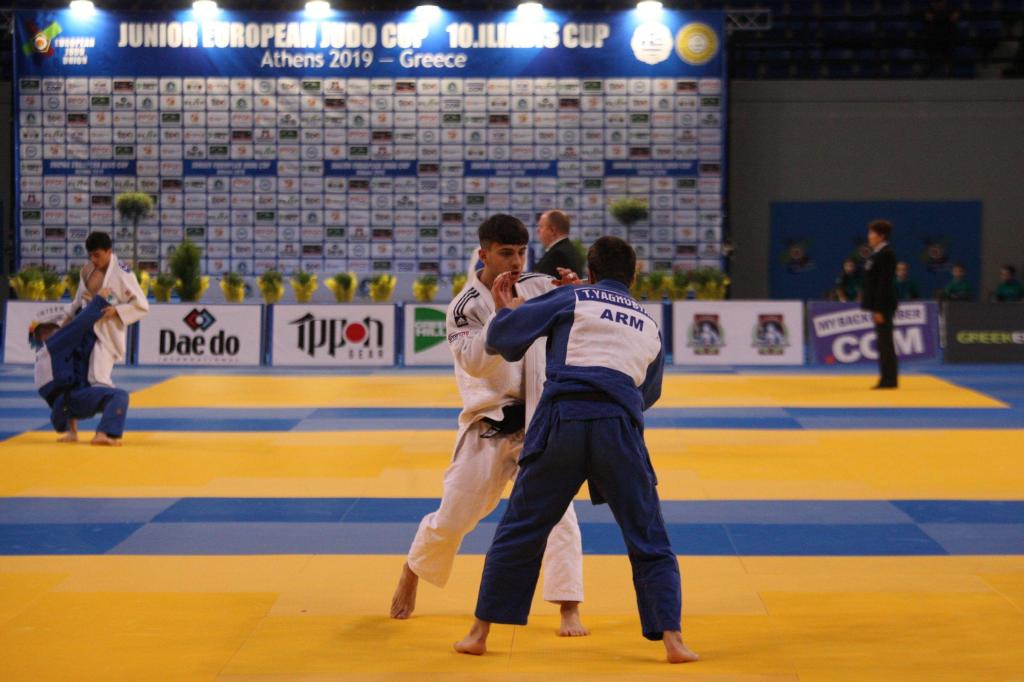 Erza MUMINOVIQ (KOS) opened the Athens Junior European Cup in the Ano Liosia Olympic Center in style, winning the first medal for Kosovo on Greek soil. The 2018 -44kg Cadet European Champion has moved up to -48kg but this did not pose an issue as she proved her skills on the tatami. Team mate, Flaka LOXHA in the -57kg category showed that the Kosovar talent did not lie just with MUMINOVIQ as she also took a gold.

“The fact that I am the first female Kosovar medallist on Greek soil is filling me with joy and pride. I feel incredibly happy to make my coach, my family and my country proud. The moments while I was listening to the national anthem of my country in excitement were indescribable. I felt from the early morning that today was going to be my day. I knew I was strong and able to overcome all the obstacles the opponents threw my way. My ambitions involve medals at European and world class competitions as I am still too young – just 16 years old – for the Tokyo Olympics. I was excited about the event, which from both organizational and competitive point of view is of a very high level. Furthermore, the Olympic facilities I competed on had a special aura, as I was told that fifteen years ago at the 2004 Athens Olympics Ilias ILIADIS won the gold medal at a young age in this very place. I am leaving with best impressions and I wish Greece becomes a cornerstone for other athletes and coaches from Kosovo.”

Sofia ASVESTA ended a ten year streak for Cyprus as she took the first gold medal for them since the Moudania tournament in 2009. Improving on her seventh place result two years ago, the 18-year-old beat Zeliha CINCI in golden score to take the gold medal.

“I am very happy to win my first medal in international tournaments. Two years ago I was seventh at the same stadium, but I think I have made significant progress since I have had the opportunity to train with the Russian national team. I hope that this medal will be the beginning of something big in the future, both at European and world level, ” ASVESTA said with pride, also explaining her Russian ancestry.

Three for three for Belarus

Rusaln HALAVACHOU in the -60kg category, along with teammates, Dzmitry MUZHAILA in the -66kg and Yahor TRUKHAN in the -73kg category achieved the perfect score for Belarus. In the final, HALAVACHOU defeated the 2016 Asian U18 Champion, Damir BOLATBEKOV, while MUZHAILA, 2016 European Cadets Championships silver medallist, was dominant against Yermek AMANGELDI (KAZ) who took bronze in the 2017 Asian U18 Championships. As for TRUKHAN, he beat the Moldovan Petru PELIVAN by ippon in the final.

Szymanska comes out on top in all-Polish final

The highly anticipated final of the -63kg was very much a Polish affair. Last year’s silver medallist in the Cadet Euroepean Championships, Angelika SZYMANSKA took to the tatami against compatriot Natalia KROPSKA. The latter had as much fuel to add to the fire of this particular final as she holds a Cadet World silver medal from 2017 and was bronze medallist in the Cadet European Championships in the same year. However it was not meant to be for KROPSKA as SZYMANSKA defeated her by ippon.

Turkey have as tremendous reputation in this tournament, on the last four occasions, taking their place within the top three countries in the overall ranking. Most impressively in 2017, topping the ranking with a total of 21 medals. The heavyweight athletes closed the event for Turkey taking the final two gold medals, Furkan GUNER in the +100kg category and Mine KALENDER in the +78kg category.

“We are very pleased with the performance of our athletes.We have been preparing for this event since the beginning of the year. During the three latest editions, we have won many medals at the Athens Junior European Cup, a very strong tournament that gives us the opportunity to measure ourselves against strong opponents. The fact that we are now competing at an event that bears the name of the great Ilias ILIADIS is very exciting. For all of us in the Turkish delegation, Ilias ILIADIS has been a glorious legend like no other. We will surely come again, as we are now leaving with the best of impressions, ” boasted Turkish coach, Nurullah DİYARBAKIR.

Meanwhile, Belarus was ranked first with three gold and two bronze medals, while Kosovo was placed third with two gold and one bronze. 17 countries managed to win a medal in Athens.

Dimitris TSOYMITAS was the sole holder of a medal for Greece in this Athens Junior European Cup. The 19-year-old athlete, who won the bronze medal in the Cadet European Championships in Sofia, 2015, took a podium place for the second time in the Iliadis Cup, but this time for the silver, falling behind his gold record in 2017.