EUROPE TAKE HALF THE MEDAL HAUL ON DAY TWO IN TASHKENT 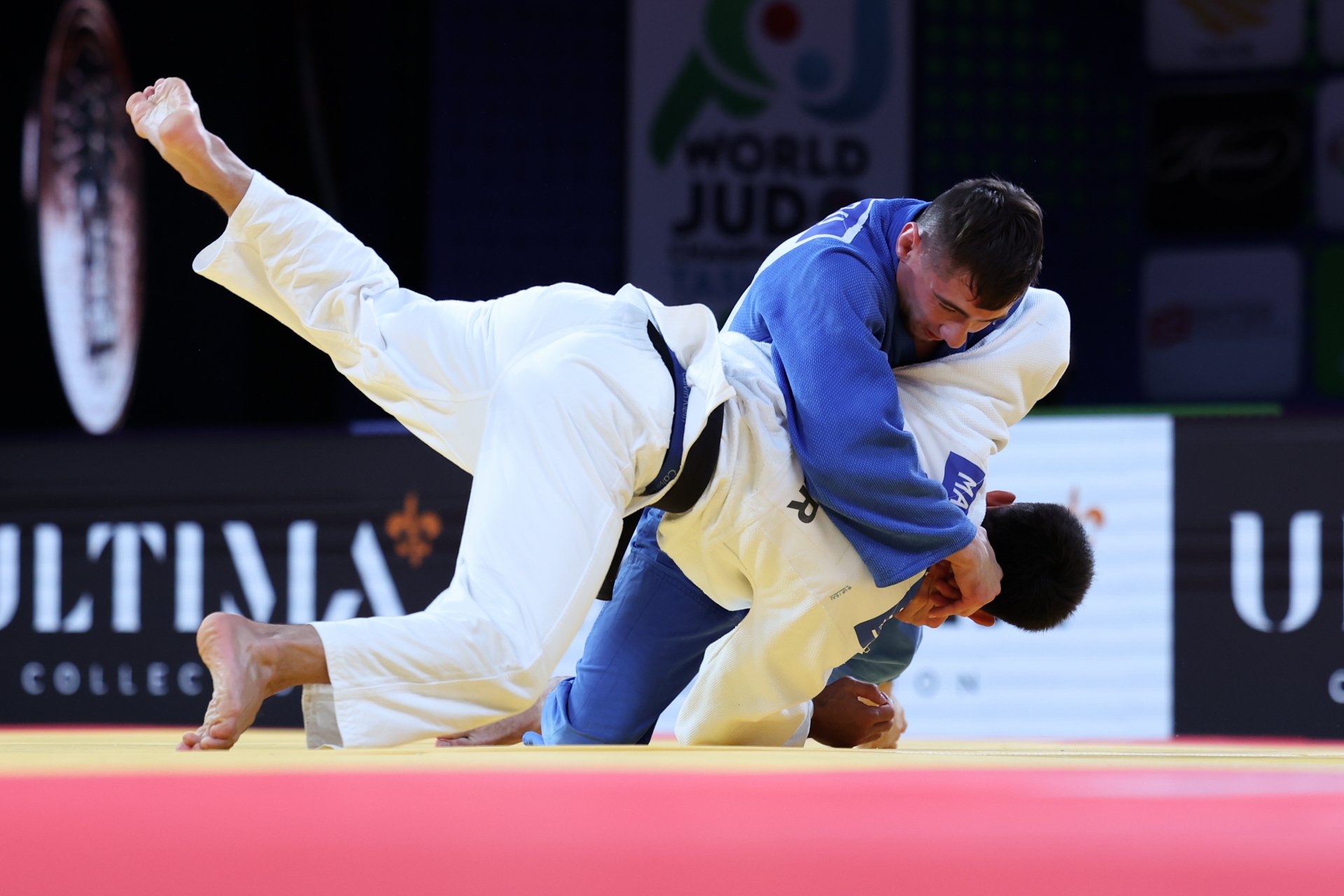 Europe started the final block on day two of the senior world championships in Tashkent with the potential of five medals for the continent, at least three were certain with two all-European bronze bouts and Chelsie GILES (GBR) in the final of the -52kg category.

First looking for a medal were Distria KRASNIQI (KOS) and Gefen PRIMO (ISR), both already with senior world bronze achievements in 2019 and 2021 respectively. On their two previous encounters, Krasniqi came out on top but in Zagreb this year it was a narrow waza ari win.

It was no different this time around as the pair went in to golden score and in the end was decided on shidos. It may not have been the ending Krasniqi was looking for but she took her second world bronze today in Tashkent.

Olympic silver medallist Amandine BUCHARD (FRA) was close in her semi final against ABE Uta (JPN), the pair going in to golden score, a waza ari each, but it was the current Olympic champion who took the win and went in to the -52kg final. Next to stand in the French #1 seeds was was BISHRELT Khorloodoi (MGL). A classic drop kata guruma from Buchard was all it took to secure her win, though the contest went the full four minutes and both athletes picked up two shidos. This is her third world bronze medal and as it happens, there seems to be a four year gap between each; Chelyabinsk 2014, Baku 2018 and Tashkent 2022.

Chelsie GILES (GBR) was the powerhouse for Europe in the -52kg category, defeating Krasniqi to gain her place in the final against Abe. Both were on the podium in Tokyo, of course Abe with the gold and Giles with the bronze as they met in the quarter finals, but notably it was a struggle for the eventual champion, only securing the win with waza ari. Today, the Japanese was tested, not only by Buchard but in her opening round against Nadezda PETROVIC (SRB).

The pair stepped on to the tatami, prepared for the world title battle and looked evenly matched, Giles attacked with uchi mata and remained in for the clinch, attempting again to use her long limbs to throw her opponent half way through the contest. Unfortunately for the British athlete, the current Olympic champion managed to counter her efforts for the waza ari that took the title for Japan.

Following the excitement of the -52kg category, we welcomed the -66kg men to the stage.

The initial bronze contest was between Elios MANZI (ITA) and AN Baul (KOR). Manzi has been on form today, losing out only to the Olympic champion in his quarter final, going on to defeat the current European champion Bogdan IADOV (UKR) in the repechage. But now he needed to step up a level to contend with the double Olympic medallist, An. Both gave their all but the contest ended with Manzi accumulating three shidos.

Going off previous head to heads, the favour lay in favour of Vazha MARGVELASHVILI (GEO) who then had to compete against the #1 seed Denis VIERU (MDA). However both had been on terrific form in their journeys to the final block, both being defeated by the eventual finalists; MARUYAMA Joshiro (JPN) and ABE Hifumi (JPN). Both with two shidos to their name, in the very final second, world bronze medallist Vieru managed to execute a low o goshi to secure his second medal.

The current world champion, Maruyama and Olympic champion Abe already had a legendary head to head at home in Japan which was televised, the deciding match to see who would go to the Tokyo Olympic Games. In the end, Abe took that place but it was so close that many have been awaiting this.

As the pair walked out to the tatami, the crowd sounded in favour of Maruyama and as it happened, Abe couldn’t seem to get ahead of his opponent, picking up two penalties. However a counter from Abe put him ahead in the contest and was enough to secure him the title to match his sisters.