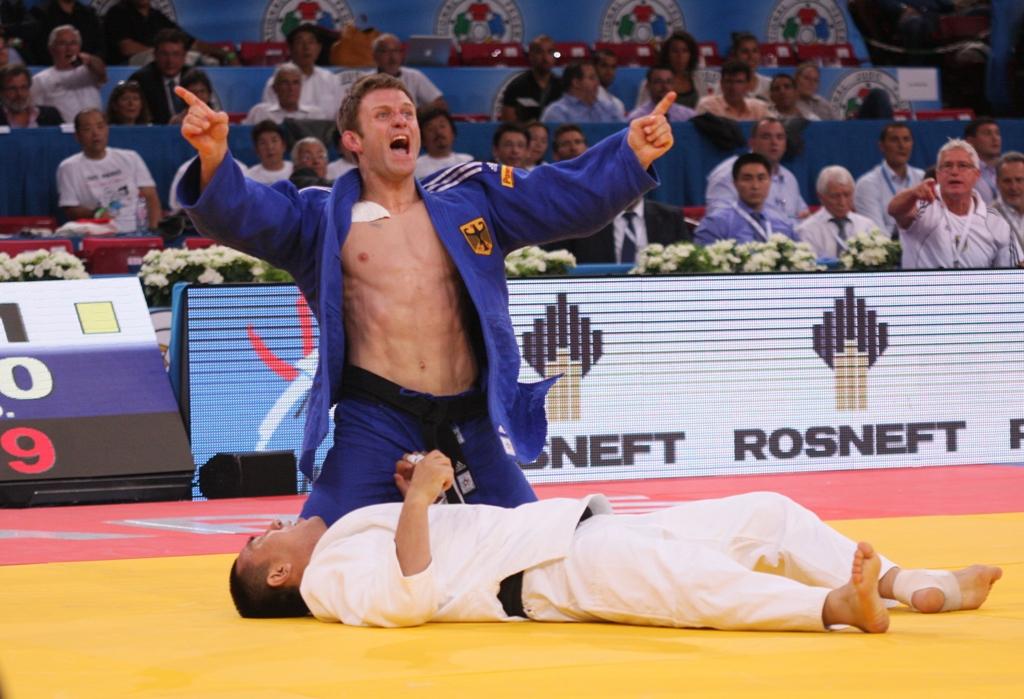 Dusseldorf, 19 February 2012. A 3,000 capacity crowd and very successful German judoka created a fantastic atmosphere on the second and final day of the Judo Grand Prix at Mitsubishi Electric HALLE in Dusseldorf. “It was a really great day”, concluded Peter Frese, President of the German Judo Federation, DJB. Marius Vizer, President of the International Judo Federation IJF, had highly praised the Grand Prix already on Saturday: “The event in Dusseldorf has developed into the world’s greatest Grand Prix.”

The winner of the Gold medal of the JUDO GRAND PRIX DÜSSELDORF 2012 at the Women’s -70 kg. Category is Rasa SRAKA (Slovenia). The final offered an interesting contest, but without spectacular techniques. Rasa SRAKA (Slovenia), the 8th judoka in the WRL, won against the surprising Brazilian Maria PORTELA, after two small penalties (shido).

Many surprises at Men’s -90 kg. Category. ONO Takashi (JPN – WRL 4), the former world number one in the men’s -90kg category, who stands in a risky position, despite his 4 th place in the world ranking list, a position synonymous with Olympic qualification, (he has now two Japanese judoka ranked higher than him), Asley GONZALES (CUB – WRL 6) and Elkhan MAMMADOV (AZE – WRL 11) lost in preliminaries. In the absence of world number one, Olympic Champion and World Champion, Ilias ILIADIS (GRE – WRL 1), the competition offered outsider semifinalists.

In the final, the top seeded judoka Kayla HARRISON (United States – WRL 4), World Champion in 2010, and Xiuli YANG (CHN – WRL 6), the reigning Olympic champions offered a very interesting and tense contest. Finally, after the Golden Score, after many attacks and counterattacks, the winner was decided at hantei, on a split decision, in favor of the American judoka.The bronze medals were won by WOLLERT Heide (Germany) and VERKERK Marhinde (Netherlands).

The Gold medalist of the JUDO GRAND PRIX DÜSSELDORF 2012, at Men’s -100 kg. Category is RAKOV Maxim (Kazakhstan). In a close final, the World number one, Maxim RAKOV (KAZ – WRL 1), had to defended his ranking position against Hee-Tae HWANG (KOR – WRL 7). The contest was again tense. In the Golden Score, the favorite won after two shido.

A total of 557 judoka from 86 nations competed at the Judo Grand Prix in Dusseldorf, organised by the German Judo Federation in co-operation with sportAgentur Düsseldorf GmbH and supported by the county of North-Rhine Westphalia.