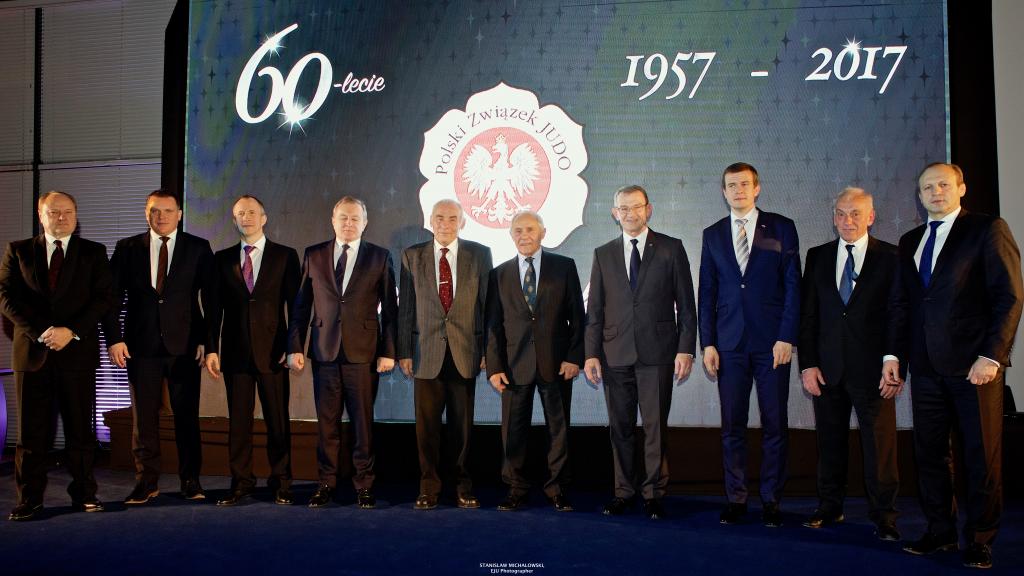 Mr. Zawadka emphasized the huge support received from the judo community, the Polish government, the Ministry of Sport and Tourism and expressed his gratefulness;

“I welcome you all to the 60th anniversary of the Polish Judo Association. Over the past years, you have accomplished great things, and we had great athletes. I wish to our future champions that their Olympic dream will come true. This is a good moment for us to work towards the same direction as Olympic success is needed for our discipline. Polish judo deserves medals at the Olympic Games.”

“I would like to warmly congratulate those who contributed to the successes of the Polish judo and to the fact that this sport has been developing for so many years. But it is not only about success, but also about thousands of young people who were and are brought up through judo. Judo gives real values ​​in life. Together with a group of friends, we try to support this sport and we are satisfied with the cooperation. We will work together to ensure that the Olympic victories in judo will return to Poland”

“I would like to congratulate the judo jubilee, a beautiful discipline that over the years has provided a huge amount of emotions, emotions, medals, from the European championships to the most important Olympic Games. It is a good day to reminisce about beautiful times, but also to reflect on the directions of development of judo. This discipline, as a martial art, has excellent educational qualities, especially in relation to the youngest, able to shape and educate. We want Polish judo to be strong, to shine with the splendor of Olympic medals.”

Awards and distinctions were awarded to the Polish and foreign guests: the vice president of the IJF Sergey Soloveychik and representative of Mr. Marius Vizer, the IJF president.

“I am happy and I congratulate the 60th anniversary of the Polish judo. The Polish relationship creates a story full of successes, great athletes and heroes who returned to Poland with great successes and brought glory”

said Sergey Soloveychik, who handed Jacek Zawadek the certificate of organizer of the European Cadets in Warsaw in June 2019.

Despite all the officials and distinguished guests, the most important heroes of the gala were the judoka, especially the medalists of the world’s largest events. The group of Olympic medalists was represented by Antoni Zajkowski, Olympic silver medallist in 1972. Many world and European medalists were also invited to join on the stage. Great coach, Ryszard Zieniawa, received the 9 DAN. During his speech, he remembered how the Poles defeated the Japanese and how they won the 2nd place in the team classification at the Games in Seoul.