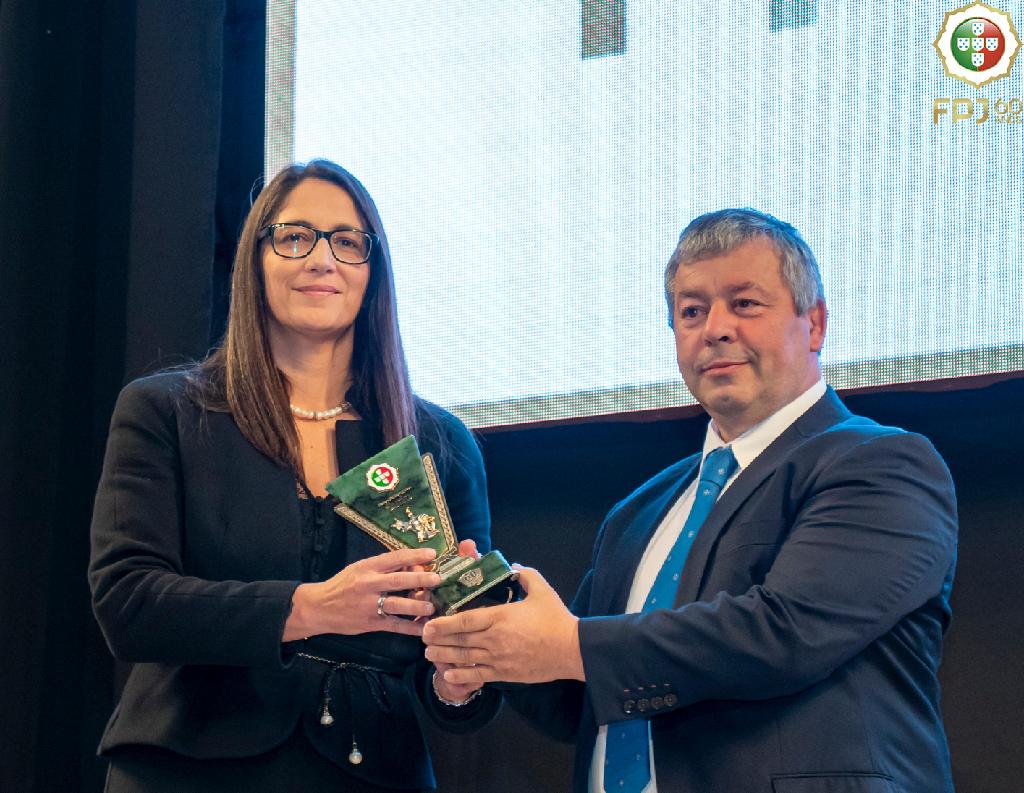 The Portuguese Judo Federation (FPJ) celebrated their 60th Anniversary with various elements, which took place in Coimbra on the 7th of December.

The celebrations began at the D. Luís Hotel; two commemorative plaques were placed, a Cherry tree (Sakura) was planted and the Commemorative Medal and ’60th Anniversary Book of the Portuguese Judo Federation’ were presented.

The highlight of the celebrations took place at the Convento de São Francisco, one of Coimbra’s emblematic venues. The event began with the presentation of the 60th anniversary film of the federation and was attended by the Secretary of State for Youth and Sports, João Paulo Rebelo; the Secretary-General of the International Judo Federation, Jean-Luc Rougé ; Sports Director of the European Judo Union Catarina Rodrigues (representing the President Sergey Soloveychik); the Chairman of the Committee Olympic Association of Portugal, José Manuel Constantino; President of the Paralympic Committee of Portugal, José Manuel Lourenço;President of Football Club of Porto, Jorge Nuno Pinto da Costa; Deputy Mayor of Coimbra, Carlos Cidade; Former Presidents of the Portuguese Judo Federation and the Portuguese Judo Family.

During the opening speeches Catarina Rodrigues read the European Judo Union President’s letter that deeply regretted not being able to be there in person to the event and exchanged gratitude with the President of the Portuguese Judo Federation.

On this day of celebration of the history of National Judo, the Portuguese Judo Federation honored all those who over the last 60 years stood out and contributed to the success and development of the sport. Although the Gala started with the Secretary of State for Youth and Sports, João Paulo Rebelo, offering two government medals of honor on sports merit to the President of the National Graduation Council, Fausto Carvalho and to the Honorary President of the FPJ, António Lopes Aleixo. The President Special Award went to the President of Football Club of Porto, Jorge Nuno Pinto da Costa. The two Portuguese Judo Olympic medals – Nuno Delgado and Telma Monteiro, the World Champion, Jorge Fonseca, the two-time European Champions league winner, Sporting CP, the National Vice-European Champion Team, the President of the European Union of Judo, Sergey Soloveychik, among other entities, sponsors, collaborators and athletes were also distinguished during the night.

“There are 60 years of history and we are pleased to bring the Family of Judo together, including the former presidents, only two who could not be present for health reasons. It is a great thrill to find some of the people who were the origin of Judo in Portugal. We started with the unveiling of a plaque at the entrance of the Hotel D. Luís, our partners, and the symbolic planting of a cherry tree, celebrating also the theme of World Judo Day – ‘Plant a Tree’, next to the 60th commemorative plaque. We presented the Book and Medal of 60 years. Tonight we organized the ’60 Years Gala’, which started with the film of these 6 decades of history and where we awarded diplomas and medals of recognition and merit to the old and current Portuguese Judo personalities. ”

The EJU is very proud of the PJF being an active member of EJU and IJF with a new World Champion, a successful and reliable organiser of prestigious and important EJU events, and a promising partner of EJU education and social programs.

The EJU is particularly happy about its cooperation with an EJU Sport Director Ms Catarina Rodrigues and I would like to ask her to present the Special Trophy dedicated to the 60th Anniversary on behalf of our family to PJF President Mr Jorge Fernandes.

May Portuguese Judo develop with the same passion as it hosts our events, may it increase the number of Portuguese names in the European, International and Olympic Hall of Fame with the same success as Telma Monteiro increases the number of her European Championship medals and may all of you today dance with the same joy and pleasure as Jorge Fonseca and Nuno Delgado after their victories.