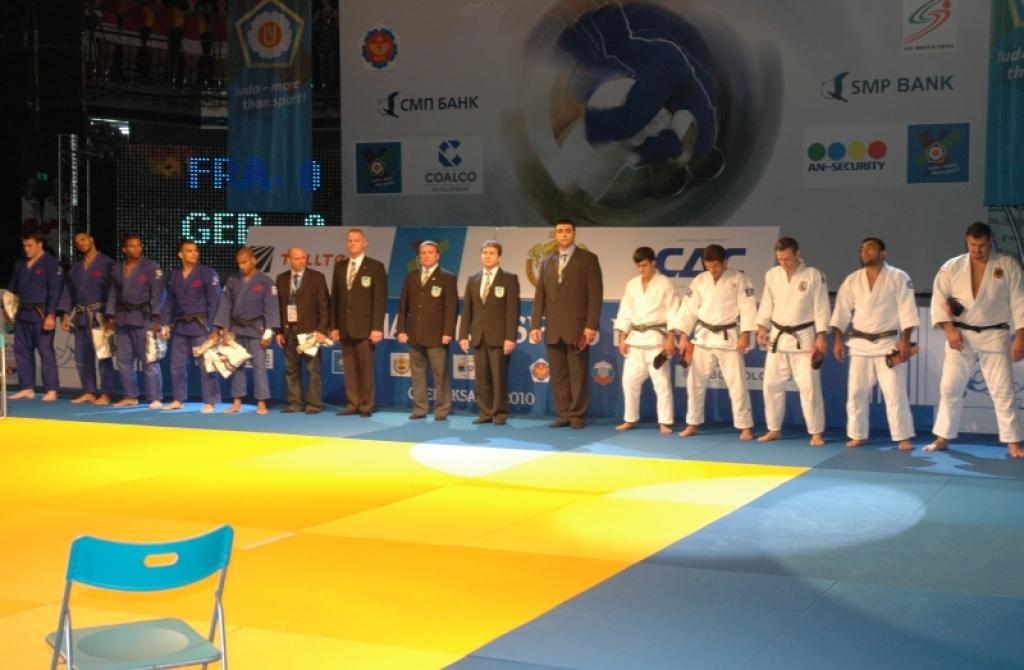 There was one flight out of Cheboksary yesterday and most of those who were involved in the European Championship Club Cup Final were on it. The fighters from silver medal winners Saint Genevieve (FRA) moved about the aircraft with pride at a job well done and seemed generally pleased with their situation.

The same could not be said for the TSV Abensberg team who chatted and amused themselves well enough but carried the burden of defeat uncomfortably as they sat in their seats for the one hour flight to Moscow. “Of course it’s difficult for us because we came here to win,” Otto Kneitinger said. “We have a good team and we made what I think were good choices based on past experience of our fighters and the likely match-ups. It’s the way things go sometimes. But we’ll be back next year, don’t doubt it, and hopefully stronger after this experience.”

On reflection the Galactica Entertainment Centre in Cheboksary proved to be a unique and more than adequate venue for the staging of the finals of European Championship for Clubs. The majority of the spectators were judo fans but it was interesting that there were a few Chuvashians who’d decided to get tickets to watch judo for the first time. Evgenia and Natasha were two students studying international business economics at the Chuvash State University. They usually “hang out” at Galactica but were attracted by the posters and strong marketing push of the event made by the organisers. I chatted with them before the final, interested to know whether they had managed to understand the rules and what they made of judo generally. “It’s really exciting because you are close to the action,” said Evgenia. “The rules are not difficult I think. If there is a big throw then there is a big score and if a small throw then a small score yes?” asked Natasha. “Something like that,” I answered.

All the fighters attended the after-party which which was held unsurprisingly and perfectly appropriately in the Galactica. After some general chit-chat I asked was brave enough to ask Mansur Isaev what his thoughts were on the day. “Ah, you mean the ippon against me,” he asked. “Well, no. But if you don’t mind talking about it,” I jokingly tried to say. “I spoke with my coach (Vitaly Makarov) about it afterwards. We were both unhappy about my being thrown this way. But I have to admit it was a great throw. In any case, Makarov always has some positives for us as fighters and our team. Today he told me that it was better to get thrown in Cheboksary in 2010 than London in 2012.” I bumped into the international business economics students again who had managed to obtain free tickets to the VIP party. They were really enjoying their introduction to judo now and had met fighters from almost half of Europe. Evgenia was complimentary about the event. “I would certainly watch judo again, especially live,” she said. “What I liked was the strangling,” said Natasha. “I mean it looks dangerous but not like punching and beating someone with your fists. Oh, and I like it when the jackets come off too! The judo guys look really, how is he best way to say, yeah, cool.” I was going to say that that was not in the rules or part of the sport. But I left it and left them with the TSV Abensberg young men who were better equipped to explain current competition techniques and invitations for next year to St. Petersburg.