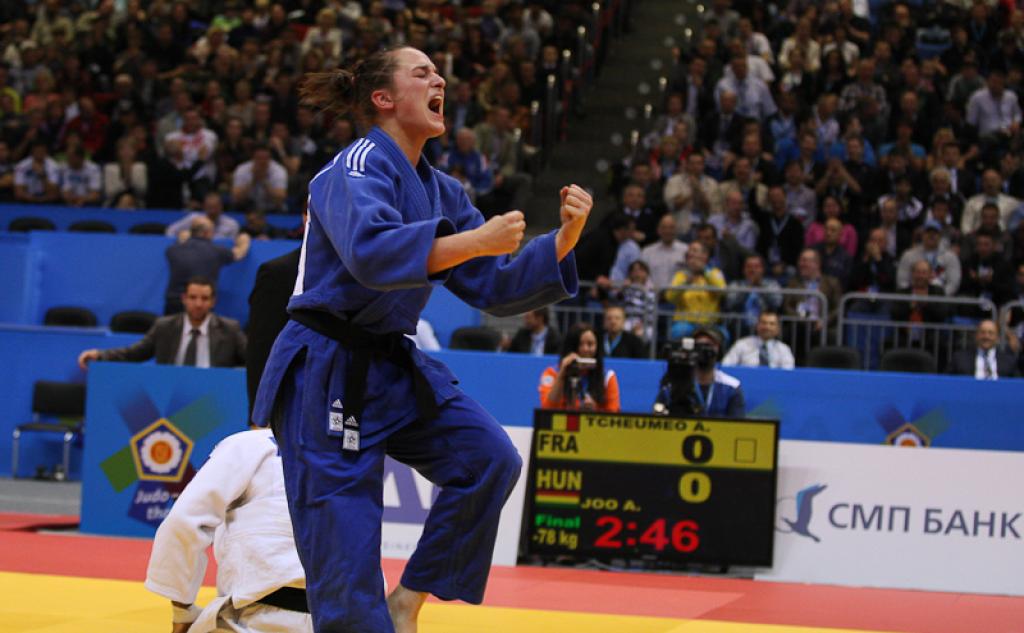 Abigel Joo won the European title U78kg. In Chelyabinsk she defeated World Champion Audrey Tcheumeo from France. The two strongest European fighters in this category qualified for the final U78kg today. World Champion Audrey Tcheumeo of France and Abigel Joo, the 2010 European Champion.
After two minutes and fifteen seconds Joo threw the World Champion for Ippon with a combination and didn’t realise her score for seconds but then she exploded in happiness and shared her joy with the crowd. She took her second European title while she is just 21 years.
Joo defeatedAlena Eiglova (CZE) in her first match and Maryna Pryshchepa (UKR) in the quarter final. The tall Hungarian was victorious over Luise Malzahn in the semi final. Audrey Tcheumeo won against Marhinde Verkerk (NED).

Abigel Joo (HUN) said to the reporter of the EJU: “I am so happy because I trained a lot before this competition. I thought if I’m not winning now, I never will. Russia is my lucky place as I won also the European U23 Championships in Tyumen last year.“

The world champion Tcheumeo commented on her loss: “This competition was a good training for the Olympic Games for me. I am pleased with my day and finishing second is not a big disappointment. I still have to work and I know what I need to do. I don’t see any problems. I learned that I need to be calmer.“

Ana Velensek was proud. “I am happy. This is my second medal at the European Championships. In some way this result confirms that I am on a good way in my preparation for the Olympic Games. I learned that I still need to train a lot. My highlight today was the bronze medal match.“

Maryna Pryshchepa of the Ukraine defeated Marhinde Verkerk. They know eachother very well and fought the World Championships final in 2009, won by Verkerk. Now Pryshchepa took revenge for her previous four losses and won her fifth European medal in her career: four bronze medals and silver in 2009.
Maryna Pryshchepa (UKR): “I am pleased with the bronze medal. I made a few mistakes in the quarterfinal. The bronze medal match was the hardest one for me. I am good friends with the Russian judoka. I beat Vera Moskalyuk in the first round and I hope nobody here in Russia got angry with me.“