Alina Dumitru: “Judo will always remain in my heart” 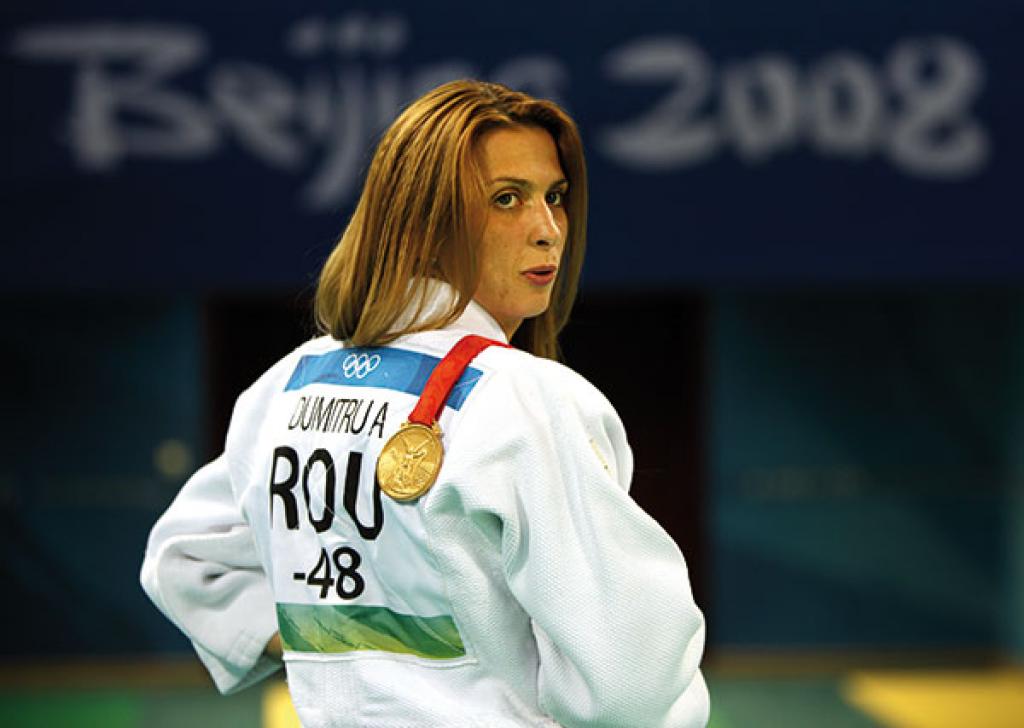 Romanian Alina Dumitru has put an end to her fantastic sports career. Olympic champion in Beijing four years ago, again silver medallist in London last August, she looks back and reveals a little bit of her future.

Alina Alexandra Dumitru, was born on August 30th 1982, in Ploiești, Romania. She was competing in the U48kg category. She won a record of 8 European titles, she became Olympic Champion in Beijing, in 2008 and won silver in London 2012. She was also three times bronze medallist at the World Championships and in 2000, she was Junior World Champion.

Enough reasons to have a good interview with her, drawn up by the IJF.

IJF: Alina, can you please explain us, what is your feeling today, after having decided to stop competing?

Alina Dumitru: Although I found it hard to give up my life from the Olympic Team of Romania, is is a nice feeling because I managed to meet my objectives and at the same time, I feel it is time to begin a new chapter in my life.

IJF: Was this decision difficult to take?

AD: Even if it was difficult to decide to stop, it was a good decision because I thought that this is the right moment to retire and I’m now feeling the need to have a family.

AD: I stop now because I consider this is the right moment for doing it and it is the proper time to focus on other domains. As I already mentioned, family is now very important to me. Judo will always remain in my heart, but there are times in a our life when we realize that is the right moment to move forward.

IJF: What is the best souvenir of your career?

AD: For each medal, I worked hard and each time I had the chance to win, I felt a special satisfaction but I think, when I look back, that the best souvenir of my career is the medal that I won at the Olympic Games in Beijing 2008.

IJF: What was the most difficult moment of your career?

AD: A judoka’s career is full of difficulties. It is very important to have enough determination in order to be able to pass over them and to focus on the future. My career was not studded with medals and titles only. There were difficult moments too, but I managed to get up every time. One of those moments, was at the Olympic Games in Athens (2004) when I lost the bronze medal in the last seconds.

IJF: What would you change, if you had to restart again your sports career?

AD: If I had to take it over again, I would not change anything. I would do exactly the same. From both, successes and mistakes, we can learn something useful and in this way I was able to realize something that I think is the dream of every athlete, who wants to have a beautiful career in judo.

IJF: When did you start judo, and was the Olympic dream present in your mind since the beginning?

AD: When I started judo (in 1994) I wanted to do this sport to strengthen me, both physically and mentally. After several hours of training, I started to like it and after I won my first medal, my coach said that I had a chance to get very far in this career. I think from that moment on, I began to dream of reaching the Olympics.

IJF: What will you do now?

AD: I am working now in the Army Sports Club, “Steaua Bucharest” (as an officer) and I will pursue a coaching career. I will also pursue a career in the Romanian Judo Federation, where I try to promote the image of the Romanian Judo.

IJF: So, you will remain involved in the judo world?

AD: Of course I will remain involved in the judo world because judo is very important to me. It had and it will always have a special place in my heart. That is why my future plans are focused on judo too.

IJF: What do you want to transmit to the future generation?

AD: I wish them good luck, to succeed in all their dreams. But I also want to give them an advice: do not ever give up on your dreams, even when you have hard times, you have to remember that our greatest glory does not consist in never failing, but in rising every time we fall.

IJF: What did you learn through judo?

AD: Through judo, I learned to be a disciplined and dignified person. Also, through judo I educated and I perfected myself ant it opened the way to a more beautiful life for me.

IJF: Who do you want to thank today? Who helped you throughout your career?

AD: I want to thank my parents, who were always present for me, my first coach, Emanoil Campeanu, coach of the Romanian Olympic Team, Mr. Florin Bercean, Mrs. Simon Richter, Mrs. Andreica Gianina, Mr. Robert Andreescu – coach at the Steaua Bucharest Sports Club. I want also to thank the Steaua Bucharest Sports Club and Petrom Ploiesti, the National Olympic Committee of Romania, the National Authority for Sport and Youth, the Romanian Judo Federation and its President, Mr. Eduard Doandes, the European Judo Union, and last but not least Mr. Marius Vizer, to the International Judo Federation President.

IJF: How to you imagine the future of judo?

AD: I imagine it spectacular. I also imagine clean judo competitions which will become more and more appreciated and loved by the public and by the media.

IJF: Thank you so much Alina and congratulations again for your outstanding career.