All French final at Grand Slam Tokyo won by Agbegnenou 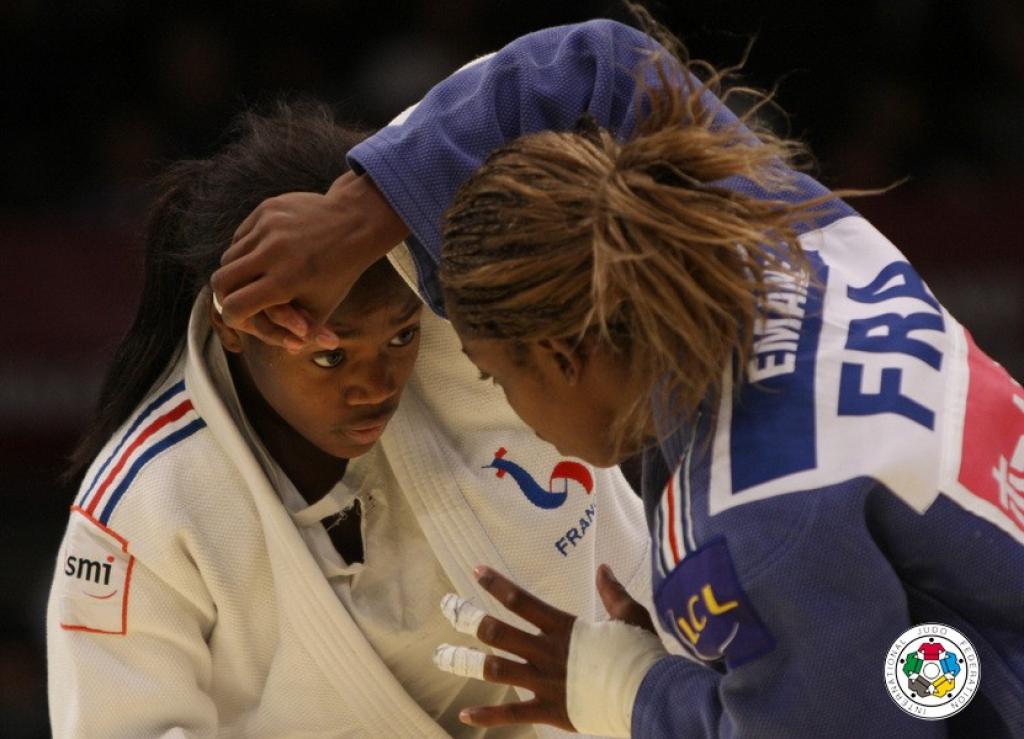 The only ‘European’ category within the dominance of Japanese judo was the U63kg. The most expected category to have a variety of continents on the stage. But the Japanese were all defeated before the semi finals. In fact Ikumi Tanimoto was the only Japanese fighter in the quarter final. In the end the final became an all French final between Gevrise Emane and Clarisse Agbegnenou. The youngster Agbegnenou won the confrontation against the ten year older Emane defeated former World Champion Emane. Just like the recent French Championships. In January she also captured the French title (the French held two championships this year to change the schedule in the future).
Again Agbegnenou was the strongest. For Emane it could have been her third Grand Slam win this year. But she started to battle after she had been given a penalty half way the match in today’s final.
Emane was one of the major favourites for the world title, also in Tokyo but there she lost to Urska Zolnir in her first match three months ago.
Agbegnenou is the challenger in France, or has that status now been changed? Again a good performance, at 23 November she lost the final of the IJF Grand Prix in Abu Dhabi against Yuhua Xu (CHN). But today Agbegnenou showed more spirit in the beginning of the match. It led to a penalty for Emane giving Agbegnenou the victory in the end.
In the semi final Agbegnenou defeated European Champion Elisabeth Willeboordse for a second time in one month (Abu Dhabi as well) and Emane beat Joung Da-Woon (KOR).
Agbegnenou is the youngest winner of the Grand Slam since 2007 when Misato Nakamura won in 2007. Ryoko Tani is still the youngest ever aged 15 in 1990. The last victory at the Grand Slam in Tokyo was in 2008 when Decosse won the U70kg category.

Kaori Matsumoto was the expected winner U57kg. The World Champion won all her matches this year. Nozomi Hirai couldn’t change that in the final. 27-Year old Kifayat Gasimova (AZE) was the only European on stage. She’s already fighting in the category for 10 years. The other bronze medal was for Lien Chen-Ling who won the the first ever medal for Taipeh at a Grand Slam, Grand prix or World Cup, very unique. Taipeh had only won two Asian Championships in 981 and 1995 and won the junior world title in 1992. So it’s quite a gap Lien closed today with this performance.
Matsumoto’s level is from another planet.

In the men’s category Riki Nagaya won his final against Yuki Nishiyama U73kg. Dirk van Tickelt ended third as he lost the semi final against Nishiyama. It was his third medal this year at an IJF event. Van Tichelt was the only European to reach even the quarter final.
Under 81kg Takahiro Nakai won the gold by beating Masahiro Takamatsu. Euan Burton won bronze. The same medal as at the World Championships in September. He also took bronze in the European Championships in April. However last year Burton won the Grand Slam in Tokyo.

Masashi Nishiyama won gold U90kg against Tiago Camilo (BRA).
Mammadov (AZE) and Liparteliani were the only Europeans in the quarter final but didn’t win a medal.
Japan won 8 gold medals in two days, last year they won 11 in total, four at the last day, so it could be a record.