All medallists reactions of day 2 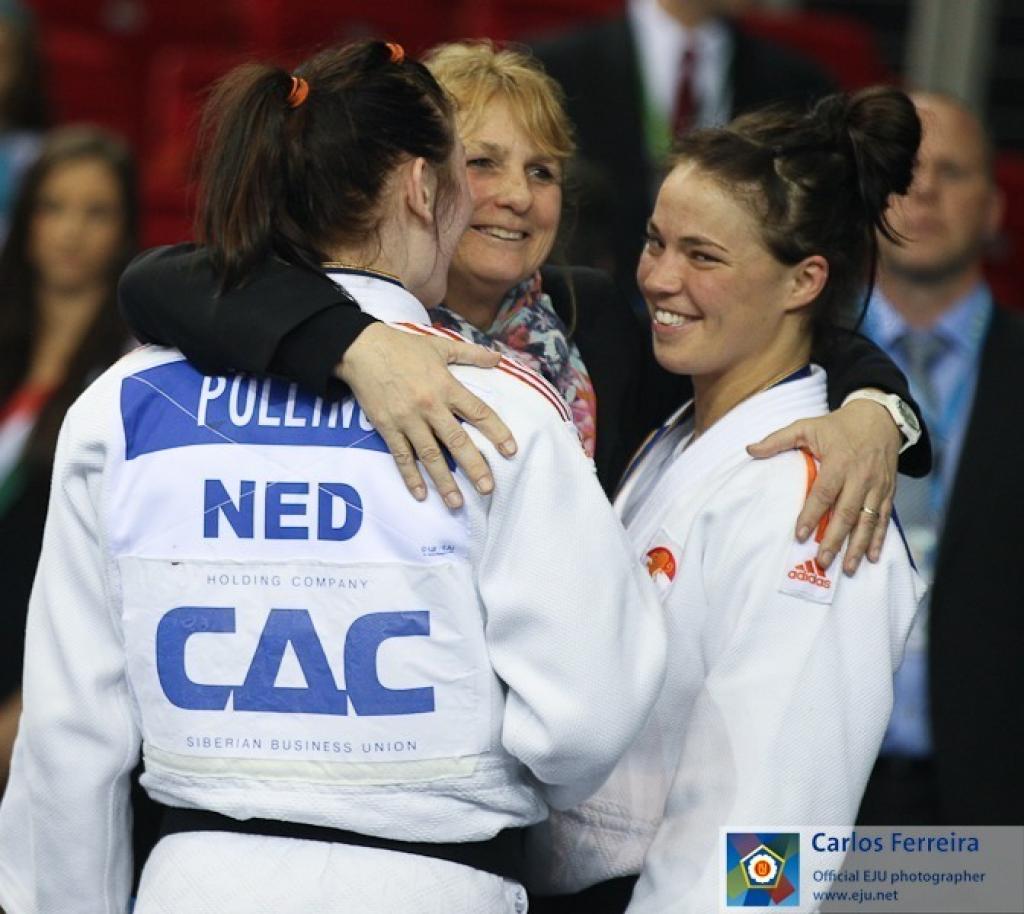 After the finals of the second day of the European Championships the EJU team has spoken to all medallist and asked for their first reactions.

Clarisse AGBEGNENOU (FRA), gold: I only can be pleased after such a day. Last year I was third, this year I wanted the gold. I knew I could do it. After my success earlier this year at the tournaments in Paris and Düsseldorf, the only thing that was lacking was the European title. I hope to repeat this at the World Championships, but I know I have a strong rival in France in Gevrise Emane.

Marta LABAZINA (RUS), silver: It is my first medal at the (senior) European Championships. I gave my very best all day except for the final. There I made a stupid mistake. I want to become number one in Russia. I didn’t get to go to the Olympic Games in London, but this is the past. I am now in the new Olympic cycle.

Yarden GERBI (ISR), bronze: It wasn’t my best day today and to take a medal when you are not at your best is a challenge. This is my third Europeans, I was fifth in my first one, second last year and now I’m third. I think this is a good result.

Tina TRSTENJAK (SLO), bronze: I feel very good about this bronze medal. It would have been even better if I had won my third fight (the semifinal), but it is still good. (On being coached by 2012 Olympic Champion Urska Zolnir) Urska is a great coach. She helps us with her experience, her knowledge and her technique.

Kim POLLING (NED), gold: This is my first European Championship and I couldn’t have had a better one. It hasn’t set in yet that I am the European Champion. All season went well, I did three tournaments and I won all of them. Maybe it is because of the rule changes, because my judo is to do something.  It wasn’t my favorite final. I know how much she wants to win, but I want to win as well.

Linda BOLDER (NED), silver: I had lots of injuries, on my ankle, my shoulder. I am happy and sad at the same time. Silver is still a good result after my injuries. (on the all-Dutch final) It is harder to fight an opponent from your own country, but my hardest match today was in the quarterfinal against Juliana Robra.

Laura VARGAS KOCH (GER), bronze:  (on scoring Ippon within 19 seconds) I did my first attack and got my grip, she counter-attacked, but I brought her down and I put her in a strangle hold. She gave up. (on taking bronze) I am absolutely happy. This is my first European Championship. I had some good results earlier this year and this bronze medal confirms that it wasn’t a fluke. The hardest fight was against (teammate) Iljana Marzok, mentally as well as we are training together and she is my friend.

Bernadette GRAF (AUT), bronze: I think you can see it in my face – I am thrilled. These are my third Europeans, but it is my first medal. I didn’t expect it. It is unbelievable. (On her competition day) I was strong in my first two fights and won ahead of time. In the semifinal, it was clear that Kim Polling was stronger.

Rok DRAKSIC (SLO), gold: This is my first major competition in this category and I made it to the final and I won. I had an awesome day. I won my first three matches by Ippon. The semifinal and the final were more tactical, but this is also part of judo.

On his secret of success: We have one motto in my club and with our coaches – hard work, hard work and hard work. It paid off today.

Pierre DUPRAT (FRA), bronze: I am really satisfied with this result. This is what I came fore. This medal has a high value to me, because there is a lot of work behind it. All my fights were hard. I am disappointed with my semifinal, but  Draksic was technically better. It was tough to regroup for the bronze medal match. When you lose in the semifinal you don’t know if you are on the podium. You have to refocus.

Avantil TCHRIKISHVILI (GEO), gold: On winning the third gold medal for Georgia at these European Championships: You saw me today, I won the gold and I gave everything I had for it. I am very proud to have won this medal. It is my first title at this level. I congratulate my teammates who won gold yesterday, and our success will continue tomorrow. This is thanks to our great coaching team.

Tomislav MARIJANOVIC (CRO), silver: I am not disappointed with this medal. The final was close, just one shido was the difference between us. I am happy to have won the silver medal.

Loic PIETRI (FRA), bronze: It was tough today. I had a slow start, didn’t get going. Then I hurt my leg in the second round. I didn’t believe that I could take a medal today. This medal means a lot to me.

Joachim BOTTIEAU (BEL), bronze: I won by golden score. My opponent from Georgia, Levan Tsiklauri, was very tough. The Georgians are very strong technically. I had lost in the semifinal to another Georgian Avtantil Tchrikishvili, and I’m proud I was able to beat a Georgian in the bronze medal match.