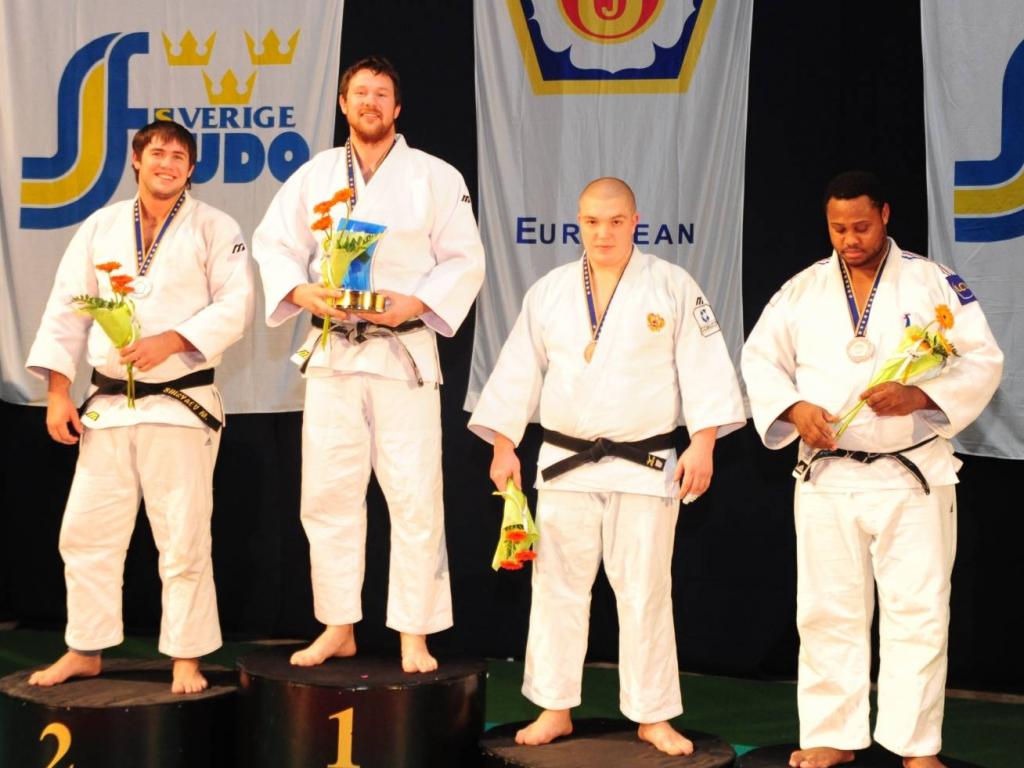 Germany and Russia did well at the first day of the European Cup in Boras. The German traditionally win the most medals at the Swedish Open. On Saturday they won two categories as well as Russia. Good old Alexander Mikhailine was able to win the heavyweight category. The 31-year old triple world champion participated for the first time and won his first international event of this year. Last year he seemed to retire after ending 33 at the World Championships in 2009. But pleasure in judo is a gift that Mikhailine likes to appreciate.
He defeated compatriot Maxim Shiryaev, Russian’s U23 champion.

In the women’s category Russia celebrated gold for Natalia Sinitsyna who defeated Katrine Hofstad in the final U52kg. Both Russia as Germany won four bronze medals, but Aaron Hildebrand (U90kg) and Dino Pfeiffer (U100) won gold for the Germans. While the top women of Germany reached the World Team Championships final, the men were able to win their finals. German Champion Aaron Hildebrand came over Alberto Arnal of Spain, who has now won three medals in a row in Boras. Two years ago he won the event.
Dino Pfeiffer won his first international event although he had picked up medals at World Cups previously.

Briton Tom Reed won the U81kg category in his final against Albert Fercher (AUT). Last week he won the Scottish Open as well.

Romania is very strong in the U57kg category. But this time it was Caprioriu but Andreea Chitu the other top judoka. The little Romanian defeated Dutch Carla Grol who won her second European Cup medal this year. Chitu lost the final of the European Cup in Hamburg, but now she collected her first gold outside Romania. In the beginning of October she won the Romanian senior title, Caprioriu won the U63kg category in her own country.

Last but not least a derby formed the final U48kg. Belgian Amelie Rosseneu was favoured by the referees over Dutch Birgit Ente. Rosseneu is amazingly strong at European cups. She already won in Arlon, Sarajevo, London and added Boras and she leads in the most won events this year and obviously the European Cup ranking U48kg. British Gemma Howell is ranked second with three events won U57kg.

On Sunday more action in Boras.