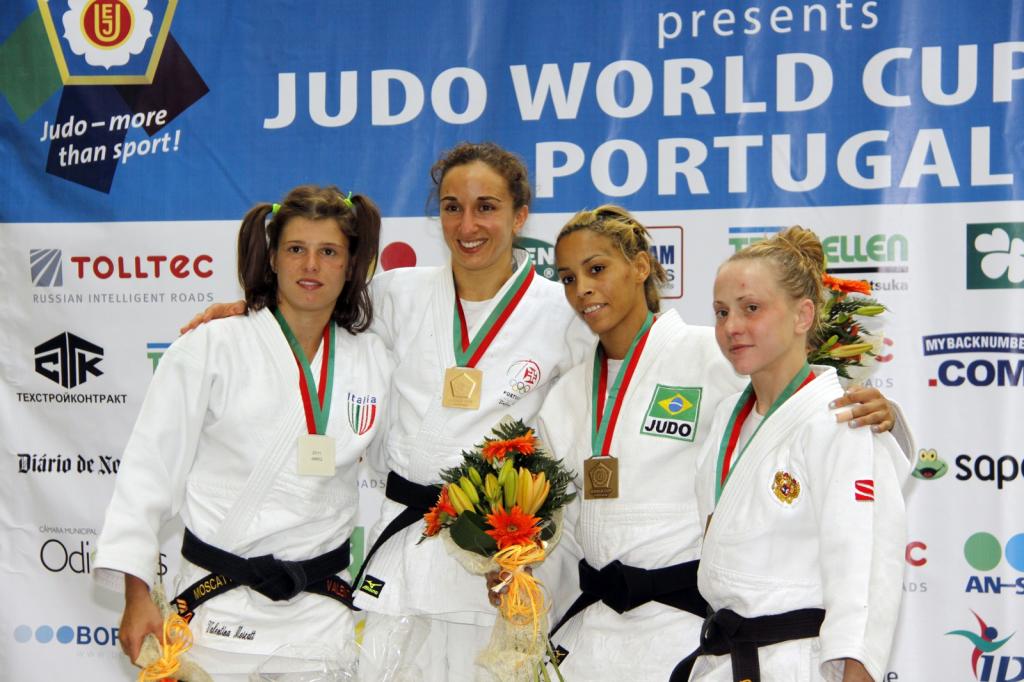 At the first day of the women’s World Cup in Lisbon high ranked judoka won the competition indicating that Lisbon has the ultimate environment for athletes to compete in such a strong field.
Today the light weight categories were held U48kg, U52kg, U57kg, U63kg, in total 87 athletes competed in a field of 137 judoka of 31 countries.

Today many expectations by the home crowd were reserved for the performance of judoka Joana Ramos, in the category U52kg, Telma Monteiro, in the category U57kg and Ana Hormigo U48kg.
Joana Ramos ended up being the biggest disappointment of the day, they could not get past the first battle. Ramos was eliminated by Anna Kharitonova (RUS). Ramos won a bronze medal at the Grand Slam of Moscow and silver at the Europeans in April, so the expectations were grounded, but at home Ramos couldn’t meet with the expectations.

Today’s Portuguese surprise was Ana Hormigo who won the gold medal in an exciting final against Italian Valentina Moscatt. Her child, just 1 year old, was the first to congratulate Hormigo. The tiny Portuguese is already in international competition for more than 10 years, but never won an important World Cup or even higher ranked event but this year. In February she won the World Cup of Prague.
Saturday was the day for Hormigo when she defeated four opponents and not the worst. As mentioned a strong competitive field she defeated Sabrina Saidi (ALG), Taciana Lima (BRA), Oiana Blanco (ESP) and Valentina Moscatt; many rivals for Olympic qualification.
Besides her victory in Prague it was quite some time ago to win a European medal finishing second at the World Cup of Bucharest in 2008. She never had a passionate relation with her own tournament in Lisbon, in 2007 she finished seventh , but at the Europeans in Lisbon she did have that extra power that crowd gave her. Today 2,500 people shouted her into the final stage and she succeeded to take the gold in the Pavilhão Multiusos de Odivelas, 10 kilometers away from Lisbon centre.

The Portuguese public was very enthusiastic and the unconditional support for the Portuguese judoka helped Telma Monteiro U57kg to bronze today. Monteiro failed to win the gold after being defeated by Brazilian Ketleyn Lima Quadros in her second fight.
The title was for Olympic Champion Giulia Quintavalle from Italy who defeated Lima. Russian Irina Zabludina had lost to Quintavalle in the quarter final but came back in the repechage and won bronze against Boukouvala (GRE) who took bronze last week in Madrid.

Not Joana Ramos but the ever strong Natalia Kuzyutina was today’s best U52kg. The Russian double European Champion defeated youngster Jacqueline Lisson from Germany in the final. Lisson is germany’s number two behind Romy Tarangul, but today she was able to stand one place higher on the stage. Tarangul lost to Kuzyutina in the quarter final but came back to defeat Petra Nareks (SLO)
Kosovarian Majlinda Kelmendi who fights for Albania won her third international price this year, but not yet a golden victory for her.
Lisson had a great day despite her loss in the final. The 21-year old took her first World Cup medal although she had won the German Open in Hamburg last year in a competitive field as well.

Today the Israelian men were good in Tallinn and Alice Schlesinger won the gold U63kg in Lisbon. Schlesinger won all five matches and took 100 extra points in the qualification. Important in her competition in this strong category with only one spot for the Olympics and Yarden Gerbi (ISR) who is still progressing. Croatian Champion Marijana Miskovic couldn’t hold Schlesinger of her victory. Earlier this year she lost twice against the Israeli but did defeat her in 2009 at the European Championships in Tbilisi.
Bronze for Spanish Yahaira Aguirre and Sarah Clark (GBR).

In the break the spectators could attend and participate in judo and aerobics classes, basketball games, and could have on the sponsors stand, the climbing wall and inflatables. The opening ceremony of the competition Women Judo World Cup 2011 had a magnificent show that combined dance, choreography, music and movements of judo. In the end, the President of the Portuguese Judo Federation, Carlos Andrade and the Sports Director of the European Judo Union, Michal Vachun, gave a warm welcome to the town of Odivelas, the public and athletes.