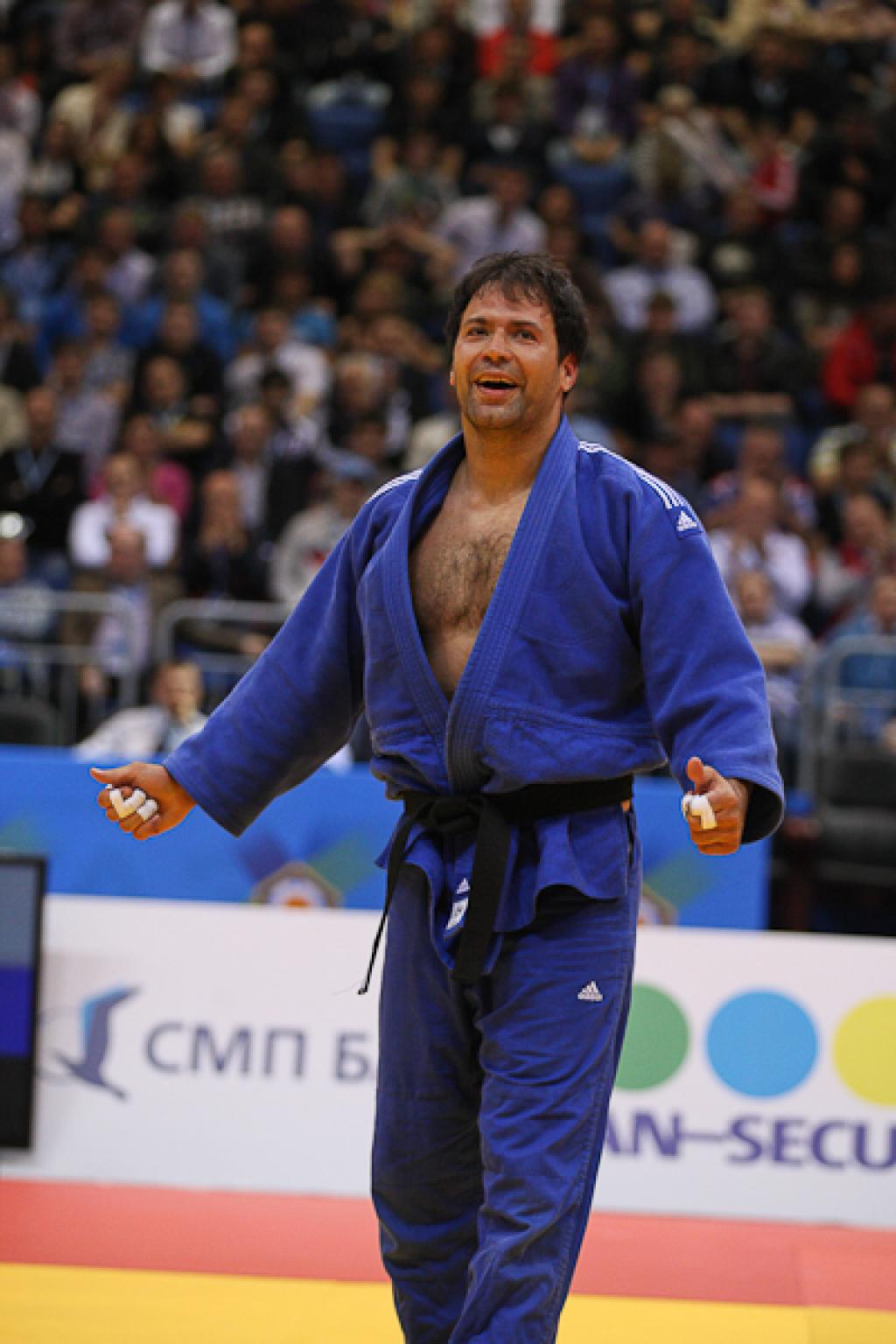 Never too old to win. Ariel Zeevi had a glancy period between 2001 and 2004 when he won three European titles. Now he is 35 but still enjoying judo and his joy flows into the tatami when he is fighting. He is still the best ever fighter for Israel and still one of the best athletes for his country carrying the flag for his country at the Olympic Games in Athens where he won a bronze medal. After two minutes he threw his opponent Levan Zhorzholiani for waza-ari lifting him for almost a perfect score. Suddenly the runner-up of last year’s European Championships had to make the match. But Zeevi kept the Georgian under control and won his fourth European title and ninth European medal. He debuted in 1996, 16 years ago and the record holder competed all Europeans since 1998.

Zeevi was excited: “It is an amazing feeling. This is my 9th medal at the European Championships and my fourth title. I won my last title in 2004 so it is great to win again, especially since these are my last European Championships. It is nice to end with this. I want to finish after the Olympic Games.”
Zeevi smiles about the new record being the oldest ever to win the European title. “It is amazing. It is nice to have set this kind of record. I was sure that I am one of the oldest, but I didn’t know that I am the oldest. I hoped to win but I wasn’t sure if I could. Only in the last match I believed that I could do it.”

Despite all injuries he suffered in his career after the Beijing Olympics he tried a new qualification. “After Beijing I told myself you are going to stop if you cannot achieve good results anymore. I only want to go to the Olympic Games if I have a chance to win a medal. I don’t just want to participate. But it is tough to remain in the top. I have a family, two kids. I’m also fighting for them. I think my children should do sports, but maybe not Judo, because everybody would say they have to do the same as their father.“

24–Year old Zhorzholiani had to be satisfied with silver again. Hopefully for him the experience pays out next year at the Europeans in Hungary.
Levan Zhorzholiani: “Today I was out of luck. I wanted to win but I came second like last year. I fought Ariel three times before and I lost each time. Ariel for sure is the oldest and most experienced competitor. I just need to fight for myself. One second can decide everything in Judo and I need to stay focused for five minutes.“

In the battle for bronze Elmar Gasimov secured a podium place for Azerbaijan. 21-Year old Gasimov beat 23-year Old Dino Pfeiffer of Germany. Pfeiffer, the U23 European Champion of 2010 couldn’t convince the referee to throw Gasimov successfully despite his attempts to get back in the match. Gasimov even added a waza-ari and won his first European medal and one of his most important medals in his career.

Gasimov: “I think today I gave the best performances of my career so far. I was fifth at the World Championships, but this is my first medal at Europeans. I never fought so well. I was really prepared and worked hard in the past six months. The hardest fight today was against Makhmadov. I was fighting for a spot at the Olympic Games and I needed a good placement. So I am very pleased.“

Zafar Makhmadov of Russia was supported by the crowd in his bout against Yauheni Biadulin of Belarus. Makhmadov took the lead in the match after 3.5 minutes due to penalties for Biadulin. Closer to the end he could defend his lead without too much risk and hold Biadulin on the ground taking a bronze medal for Russia. Makhmadov defeated Gasimov in the quarter final but in the end both fighters won bronze. The strong Lukas Krpalek was defeated by Makhmadov in his second match.

Makhmadov: “It was hard to win in the semifinal against such a master as Ariel Zeevi. I made errors, because I didn’t stay calm enough. I could have done better. It was shame but the bronze medal is like a belated birthday present for me.” Makhmadov will not go to the Olympic Games. “My goal is to prepare for the next Olympic cycle.“