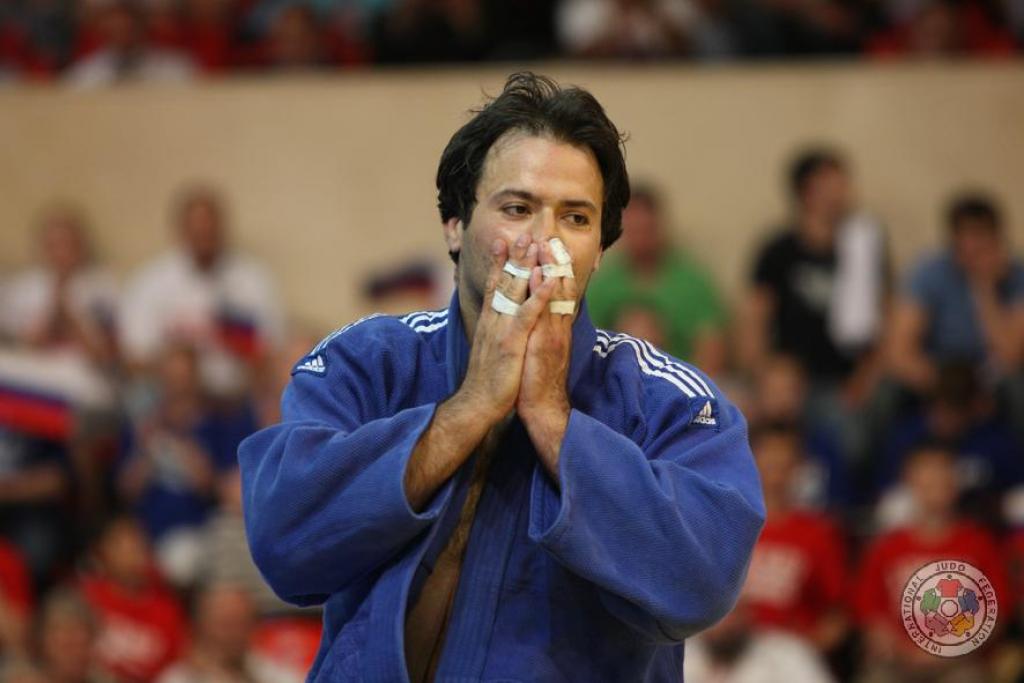 Big stars have won the Grand Slam of Moscow; Ilias Iliadis (GRE U90), Edith Bosch (NED U70), Akari Ogata (JPN U78), Tong Wen (CHN +78) but luckily also space for talents that broke through the elite class and now will be seen as the elite like Sven Maresch (GER U81) and Kim Soo-Whan (KOR +100). Maybe the biggest surprise was Ariel Zeevi U100kg, 34 years and still the pride of Israel.

Men’s -100kg: Experience is rewarded!
11 years, is the age difference between Ariel Zeevi (ISR) who was in the first semi-final and Cyrille Maret, the 23 year-old athlete from France, who was in the second half of the draw in the men’s -100kg category. The “veteran” and the “rookie” respectively won their semi-finals against Maxim Rakov (KAZ), World Champion in 2009 (Rotterdam) and Ramziddin SAYIDOV (UZB).
At the beginning of the final, it would have been difficult to say who will take the lead, but rapidly, Zeevi scored a nice waza-ari with the combination ipon-seoi-nage / ko-uchi-gari, Maret reducing the score by yuko with a well prepared O-soto-gari. Calmly, Zeevi was approaching to the title, despite the strong attacks of the French. 2 seconds before the gong, once again Zeevi scored a yuko with a shoulder attack, assuring his victory.

Men’s -81kg: Maresch moves up to the elite
Number 1, Korean Kim, was at least expected in the final block and nobody seemed to be capable to stop him for the gain of a second Grand Slam title… but him. Leading easily his quarter final, in the last seconds, he “escaped” from Maresch (GER) and was disqualified for “attitude against the spirit of judo”. That unexpected win sent Maresch into the semi final against Olympic Champion Ole Bischof, also from Germany, and then into the final after a very intense fight with his teammate, where two fighters knew each other really well. In the second half of the draw, Islam Bozbayev (KAZ) was opposed to the winner of 2011 Dusseldorf Grand Prix, Travis Stevens (USA) who obtained his ticket to the final in the golden score, winning by immobilization.
In the final, the first two minutes were a time of observation, Maresch being penalized by a shido. After their semi-finals, which both went to the golden score, the two competitors looked tired. One minute before the end of the final Stevens who also received a shido, was penalized for the second time, giving the lead to Maresch. Stevens would never be able to score and Maresch, who thought that he had lost against Kim, earlier in the day, wins the Judo Grand Slam, Moscow 2011.

Men’s -90kg: Magical Iliadis
The final of the men’s -90kg, was definitely the fight that everybody was expecting in the morning: Daiki NISHIYAMA (JPN), number one seeded vs. Ilias ILIADIS (GRE), olympic and world champion. The two competitors didn’t disappoint their fans and Iliadis only took 45 seconds to score ippon winning one more important title for him. the joy and happiness of Iliadis, after his win and on the podium were really communicative. With a so impressive number of titles, Iliadis is still enjoying wining and producing explosive judo.
Earlier during the day, Daiki Nishida (JPN), eliminated Kwon (KOR), Schirhoffer (AUT) and Bolat (KAZ) before being opposed to Hugo Pessanha (BRA) who has previously beaten Nyman (SWE), Weglarz (POL) and Huisman (NED). On the other half of the draw, World and Olympic Champion, Iliadis (GRE) was again present at his highest level, showing spectacular judo, while Roberto Meloni, Number 25 in the World Ranking List was winning his first three fights to enter the final block.

Men’s +100kg: Title for Korea!
Most of the favorites of the category were prematurely eliminated during the first rounds. El Shehaby (EGY) seemed already tired at the end of his first fight and he was beaten by Parra during the second round of combats. The first semi final opposed number 16 and number 25 at the world Ranking List: WOJNAROWICZ, Janusz (POL) vs. STERKHOV, Dmitriy (RUS). In the second half of the draw Kim (KOR) defeated the giant Andreas Toelzer (GER), who was dreaming of the final may be too much in advance. The consequence of that little elimination game was that the best seeded athlete present in the final block was Abdullo Tangriev, who earlier during the day sent back home world champion Alexander Mikhaylin (RUS).
With the good performance of Sterkhov during the preliminaries, Russia was expecting a gold medal to put a perfect end to the show, but Kim didn’t agree and scored ippon disappointing the all public.

Women’s -70kg: Bosch scored again!
Once again, former World Champion and double Olympic medallist, Edith Bosch, from the Netherlands, was still present in the last four, in the women’s -70kg, opposed to Fei Chen (CHN) in the semi-final. The regularity of Bosch at that level of competition is quite impressive. With 41 medals obtained during World Judo Tour events, she has one of the most impressive prize list. Her win against Fei Chen (CHN) opened her the gates of the final where she met Haruka Tachimoto (JPN). After the first round of observation, Bosch, who is sometimes accused of playing with the penalties to win, proved in Moscow that she is really talented and that none of her titles are usurped. With a incredible o-uchi-gari, she sent back home Tachimoto and won the Grand Slam.

Women’s -78kg: Gold for Ogata
In the absence of the new “ogre” of the category, the French Audrey Tcheumeo, who recently won the European Championship, it was a new occasion for her teammate, Lucie Louette (FRA), to show her talent. Two weeks ago, in Baku, while she was almost sure to enter into the final of the Grand Prix, Lucie did a big mistake and finished at the third place. On her way to the final block, she eliminated the young World Champion, Kayla Harrison (USA). In semi final she was opposed to another new value of the category, the 20 year-old Abigel Joo, from Hungary, who in quarter final had beaten Heide Wollert. But once again Louette was not able to enter the final and stood on the third position. In the final, Joo was opposed to Akari Ogata, who had a pretty easy championship so far even if she won some of her fights only by penalties. But the final was an other story and Ogata didn’t give one single change to the young Hungarian and immobilized her quickly.

Women’s +78kg: an Asian Story!
The Women’s +78 kg category was an asian story with three Asian fighters present in the final block, Gulsah Kocaturk (TUR) being the only competitor from Europe still fighting for a medal, at least a bronze medal. But the Turkish girl couldn’t do anything against the power of Tong Wen who immobilized her after only one minute in the semi-final and who did exactly the same to the Korean Kim in the final.