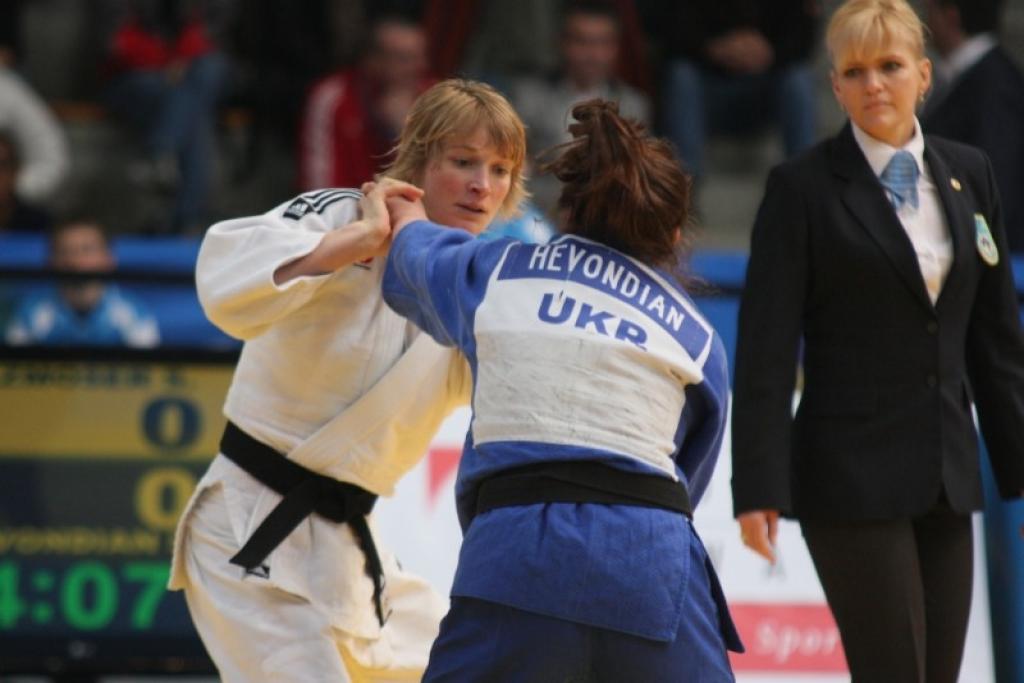 At the European Open of Oberwart Austria was satisfied with a final position for Sabrina Filzmoser U57kg. It was too long ago that the Austrian women had won a gold medal. The last time was in 2005 when Sabrina Filzmoser claimed the gold in Leonding, also a World Cup level event. Now she was determined to get back well after her deception last week in Paris at the Grand Slam. She felt she was on the right way and on Saturday in Oberwart she proved she is. Filzmoser defeated four opponents including the two later bronze medallists. In the final Megumi Ishikawa (JPN) was her opponent and she had lost twice previously at previous events. This time the Japanese showed good groundwork but Filzmoser escaped one time, but the second  time, 25 seconds for the end, it was Ishikawa who could now control Austria’s pride for 20 seconds and took the gold. One of the strongest ne-waza specialised defeated at home ground on the ground, a right winner from Japan who defeated everyone today.

The bronze was for Jovana Rogic of Serbia who defeated youngster Katinka Szabo of Hungary in an exhausting fight. Rogic reached the semi final after victories against Huseynova (AZE) and Nekoda Davis (GBR) but lost to Filzmoser in the semi. Szabo really had a good day. The 18-year young sister of European U23 Champion Franciska defeated the number one seeded Sumiya Dorjsuren (MGL) in her second bout but lost to Ishikawa and came back in the repachage to Rigelnik (SLO). But in the match for bronze Rogic, who won the Grand Slam of Rio last year, it was Szabo who was more brutal and tried to make the armlock in the last minute, but Rogic escaped. In the golden score again no difference after almonst 2 minutes  it was now Rogic who successfully caught Szabo in an armlock and Szabo tapped. The 24-year old Rogic went back with bronze. It was the third golden score in total on the day.

Brazilian Ketleyn Quadros took the second bronze against Joliane Melancon of Canada. Quadrosscored a waza-ari in the first minute and added an ippon after 96 seconds to take the third place.

The gold medal U48kg was for Bo-Kyeong Jeong  from  Korea. The 21-year old Korean has quite some experience despite her age. She defeated German Kay Kraus in the final after 37 seconds. Not bad at all for Kraus, in a strong field she won silver and her second medal at a European Open or World Cup level. Another Korean lightweight Choi Soo-Hee won the bronze after she defeated Miri Toda (JPN) in a tough battle. Choi lost to Jeong in her semi final.

The second bronze medal was for Russian Alesya Kuznetsova who defeated Ewa Konieczny of Poland quickly. Kuznetsova is the Junior European Champion of 2010 and runner-up of the 2011 Junior World Championships.

Bo-Kyeong Jeong was the highest seeded player and  she won four matches. She is coached by the 2004 Olympic Champion U73kg Won –Hee Lee.

Three European medals to start off.

In the weight category U52kg Munkhbat Urantsetseg of Mongolia claimed the victory. Her opponent was Brazilian Eleudis Valentim who was penalized after 30 seconds. Athough Munkhbat had the better judo, it didn’t result after five minutes but the two penalties awarded to Valentim made the difference.

Munkhbat had beaten Nodoka Tanimot in the semi final, Valentim defeated Balyinnyam in the semi.

The bronze was won by Nodoka Tanimoto, who recently finished second at the Grand Slam of Tokyo but lost to Munkhbat in the semi final. In her bronze match she defeated Delphine Delsalle holding her on the ground for 20 seconds. Second  bronze was for Bat-Erdene Baljinnyam (MGL) against Polish Zuzanna Pawlikowska. Halfway the match she made a mistake and ended in a hold down and gave Baljinnyam the victory. The Polish who fought well today but lost to two Asian opponents, good practsie for the 21-year old talent. Difficult category today for Europe, last edition in 2011 won by Ilse Heylen, but that was the only victory for Europe in 2011, furthermore won by Asian women.

Filzmoser was satisfied but also knew she made a mistake in the final: “Today I felt I could beat her. I lost to her twice but this time was different. We trained so many times with eachother and Ishikawa knows all my techniques. She was intelligent today and immediately benefit from my mistake. I was close though.”

The final between Miki Tanaka of Japan and her compatriot Kayoko Sano wasn’t too heartwarming. The experienced Tanaka, number two of tge 2010 World Championships claimed the victory U63kg after a penalty for Sano.

The strong Slovenian Nina Milosevic captured a bronze medal in Oberwart against Japanese Natsumi Katagiri. Same colour for Rogic as in Sofia but she adapts well in the seniors. She won European gold U23 but shows a convincing development. Today she was coached by Urska Zolnir, still the World Ranking Leader in this category.

The other bronze was an exciting final for the homecrowd between Kathrin Unterwurzacher and Joung Da-Woon of Korea. Joung, number five at the Olympic Games lost in her second fight against Kayoko Sano but came back via Hilde Drexler (AUT). Against Unterwurzacher it was Joung who scored a yuko first and it was tough for Unterwurzacher to fight herself through the match in her attempt to get back. She speeded up the match but couldn’t prevent Joung from winning the bronze.

Review the live results of both European Open’s in Oberwart and Budapest in our calendar: