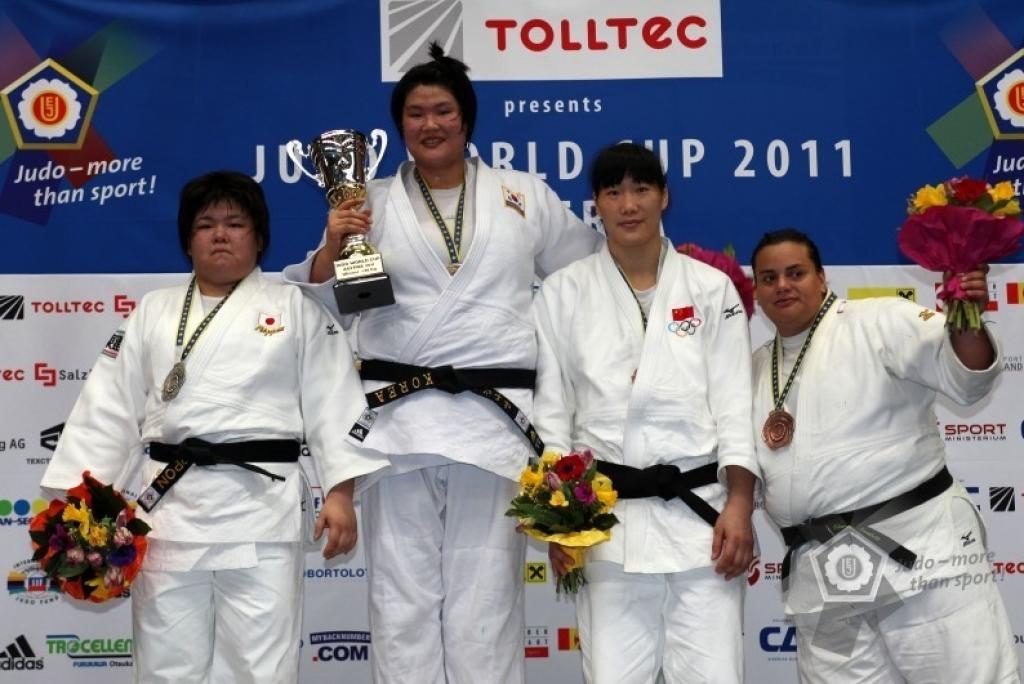 At the women’s World Cup in Oberwart Korea won another two gold medals. Japan won one gold medal making a total of three this weekend in Austria. Not only the lightweight categories but also the heavier women were able to take the gold. Tomomi Okamura (JPN) defeated Canadian Amy Cotton in the final of the U78kg division. In the semi final she defeated Yahima Ramirez, one of the three European ladies who qualified for the semi finals today. Ramirez won bronze together with Vera Moskaliouk of Russia.

Korea took a surprising gold medal in the heavyweight category. In Oberwart Kim Na-Young defeated Megumi Tachimoto who seemed to be unrivaled. But she didn’t show her best judo in the final and couldn’t score against Kim.
Tachimoto had won the Grand Slams of Tokyo and Paris and the Masters in Baku. But Korean Kim was nonetheless able to prevent Tachimoto from scoring in regular time. In the golden score both fighters didn’t score in a boring fight, but Kim had the most positive share in the fight. Good competition in the women’s heavyweight category.
Kim had beaten Tachimoto twice before in 2008 and 2009, but at the last World Championships Tachimoto defeated Kim for bronze. Kim now took revenge.

Korea however won another gold medal in the U70kg category. Asian Champion Hwang Ye-Sul is getting stronger every month and already won bronze at the Grand Slam of Tokyo and silver at the Masters in Baku. Stating that Oberwart had a strong field in general.
Hwang Ye-Sul was victorious over Maria Portela, who was the third Brazilian to lose a final in Oberwart. Bronze was for 2009 World Champion Yuri Alvear of Colombia who won her first medal in Europe after her world title. The other bronze was for Dutch Kim Polling, the reigning world junior champion.

Ten medals for Europe, one more than the 2009 edition in Vienna. Gold for Ilse Heylen who won the second gold medal for Europe since 2007 when Marijana Miskovic (CRO) won gold in 2009. The Asian ruled again in Austria.