AT LONG LAST IT IS GOLD FOR NIKIFOROV 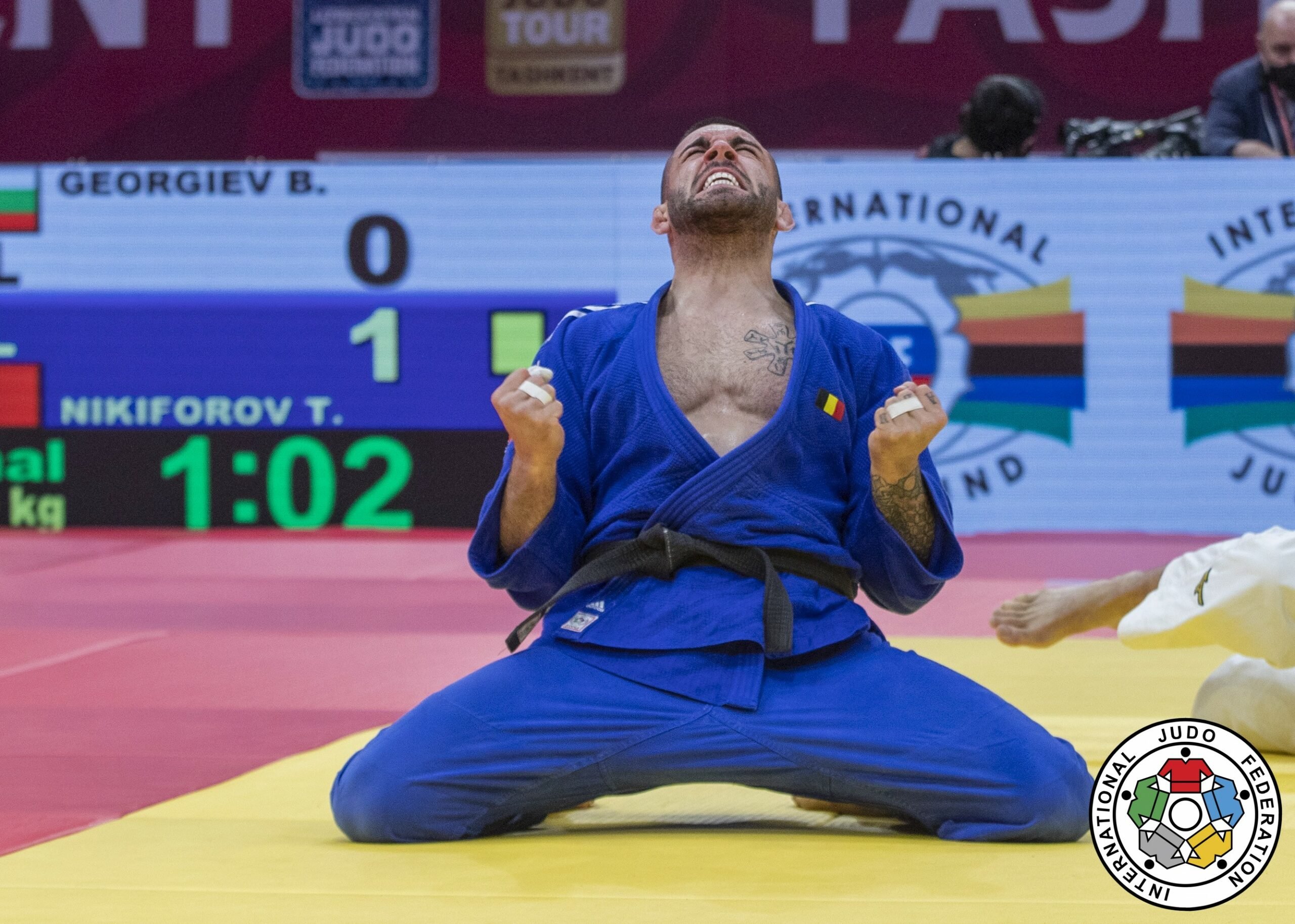 It took some time, seven years if one really wants to count. But, Toma NIKIFOROV (BEL) finally won a gold medal in a Grand Slam when in the final of the -100kg category he defeated unseeded Boris GEORGIEV (BUL) who until five months ago had never even fought in a Grand Slam. The gap in experience was there to see as Nikiforov scored twice on the 24-year old Bulgarian. Nikiforov’s delight was also there for all to see and, to his credit, Georgiev, despite his disappointment, sportingly gave his congratulations as the Belgian’s 19thGrand Slam effort ended in glory. In the first of the bronze medal contests Muzaffarbek TUROBOYEV (UZB) threw LKHAGVASUREN Otgonbaatar (MGL) twice to take his first ever Grand Slam medal. BATKHUYAG Gonchigsuren (MGL) levelled things in the Uzbekistan v Mongolia head-to-head up when he threw Aklmurodbek KHUDOYBERDIEV (UZB) with a huge o soto gari for ippon to take the second of the bronze medals. 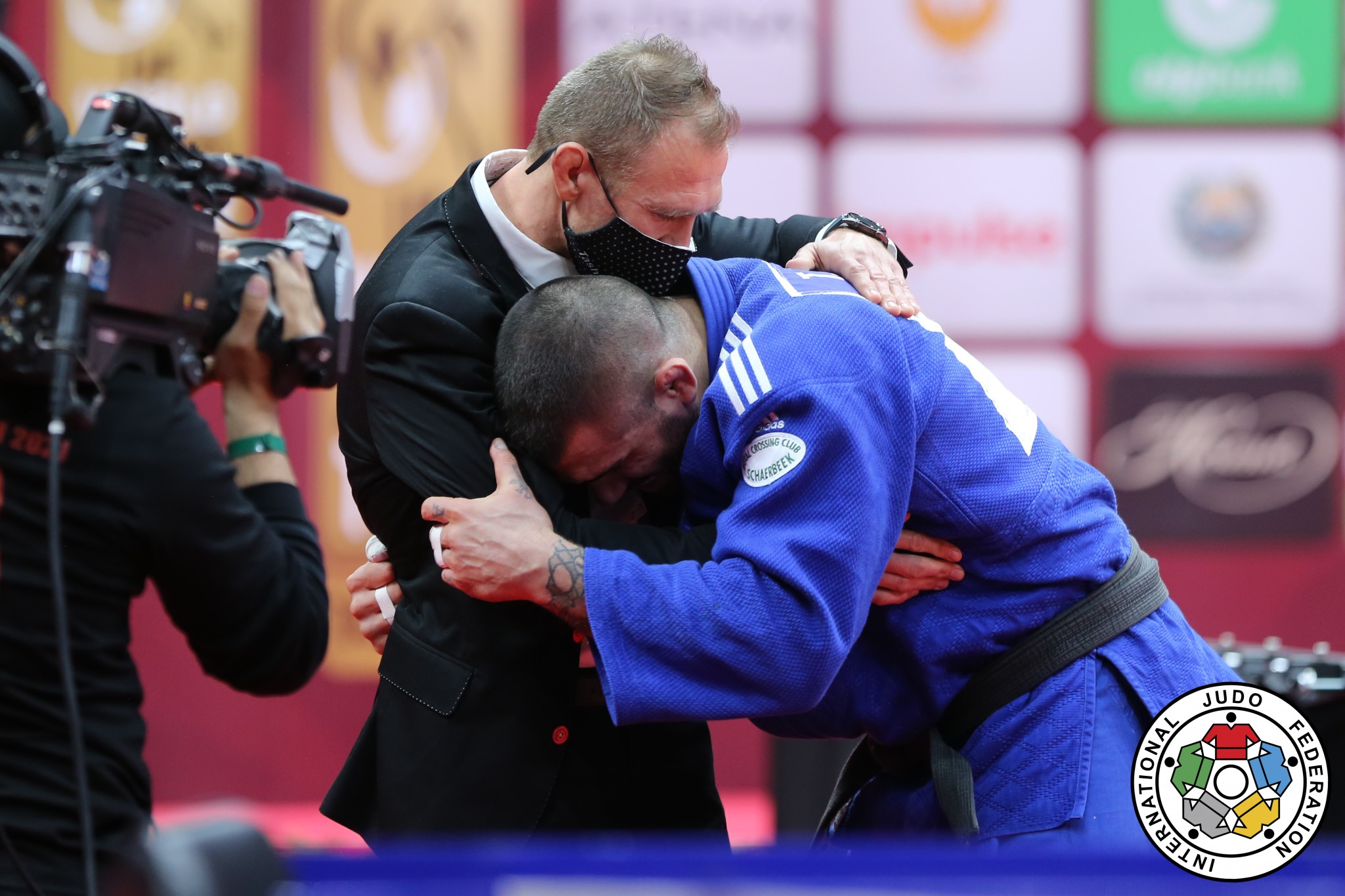 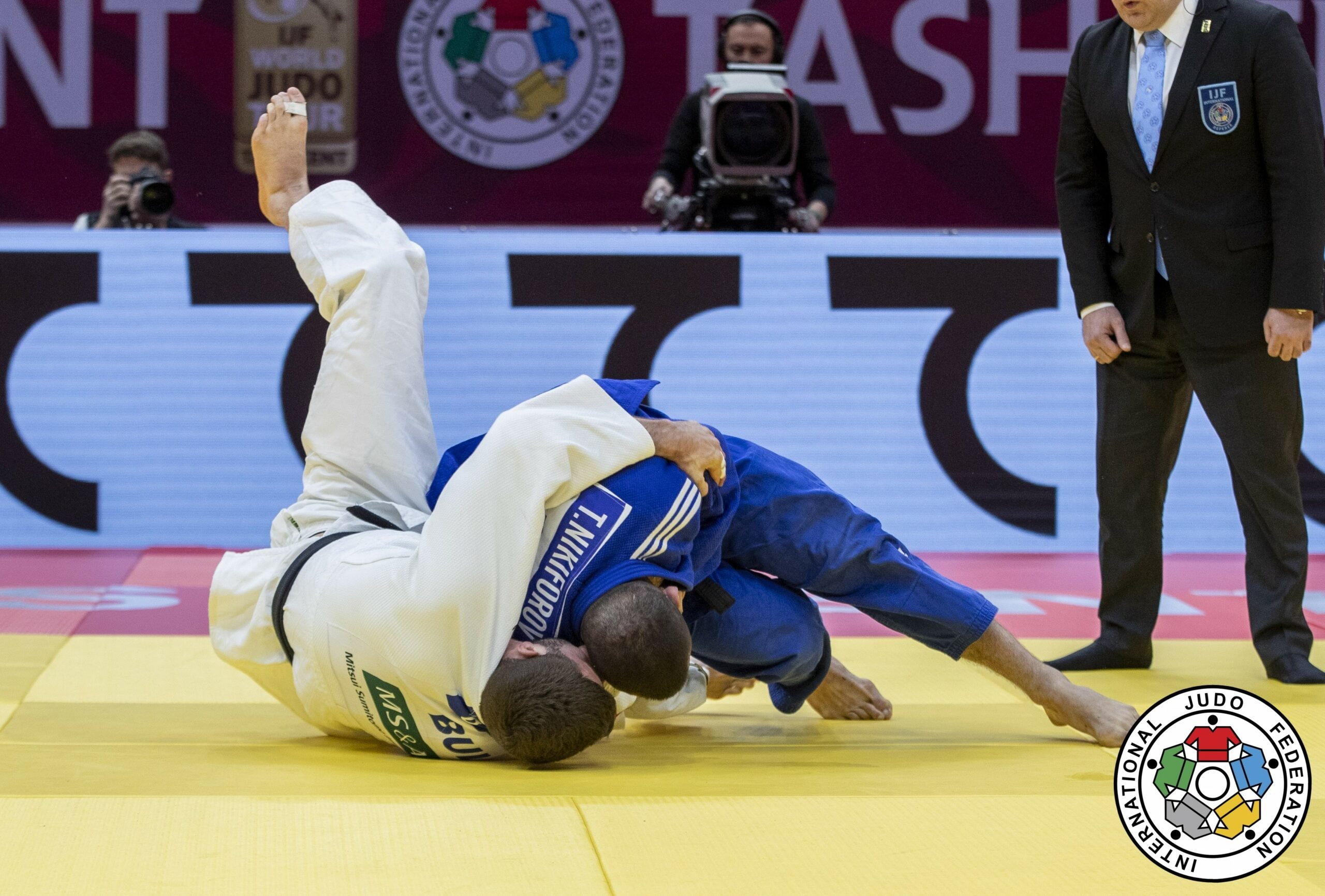 There was an early upset in the -78kg category when number one seed Natalie POWELL (GBR) was defeated by 18-year old Iriskhon KURBANBAEVA (UZB). This left the way clear in the top half of the draw for Karla PRODAN (CRO) to follow up her bronze medal win in Tel Aviv last month with a fine performance, eventually having to settle for the silver medal, losing out in the final to 2015 world champion UMEKI Mami (JPN). Beata PACUT (POL) had to settle for a fifth place finish when she was thrown with sode tsuri komi goshi by LEE Jeongyun (KOR) in the first of the bronze medal contests. Things went a bit better for Inbar LANIR (ISR) when in her bronze medal contest the promising 20-year old Israeli caught YOON Hyunji (KOR) with tate shio gatame to score waza ari before countering the Korean for a second score to take her first ever Grand Slam medal.

Things were shaping up nicely for a final in the -90kg category between the top two seeds. That was until the semi-final stage when number one seed TOTH Krisztian (HUN) lost out to NAGASAWA Kenta (JPN) and number two seed Mammadali MEHDIYEV (AZE) went down to Davlat BOBONOV (UZB). Mehdiyev managed to come back to take the first of the bronze medals when he threw Shermukhammad JANDREEV (UZB) with ippon seoi nage for ippon. Likewise, Toth was successful in his bronze medal contest when he threw Klen Kristofer KALJULAID (EST) for ippon with an expertly executed uchi mata sukashi. In a closely contested final it was Nagasawa who after 2:30 of golden score threw Bobonov with sumi gaeshi to take the gold medal. 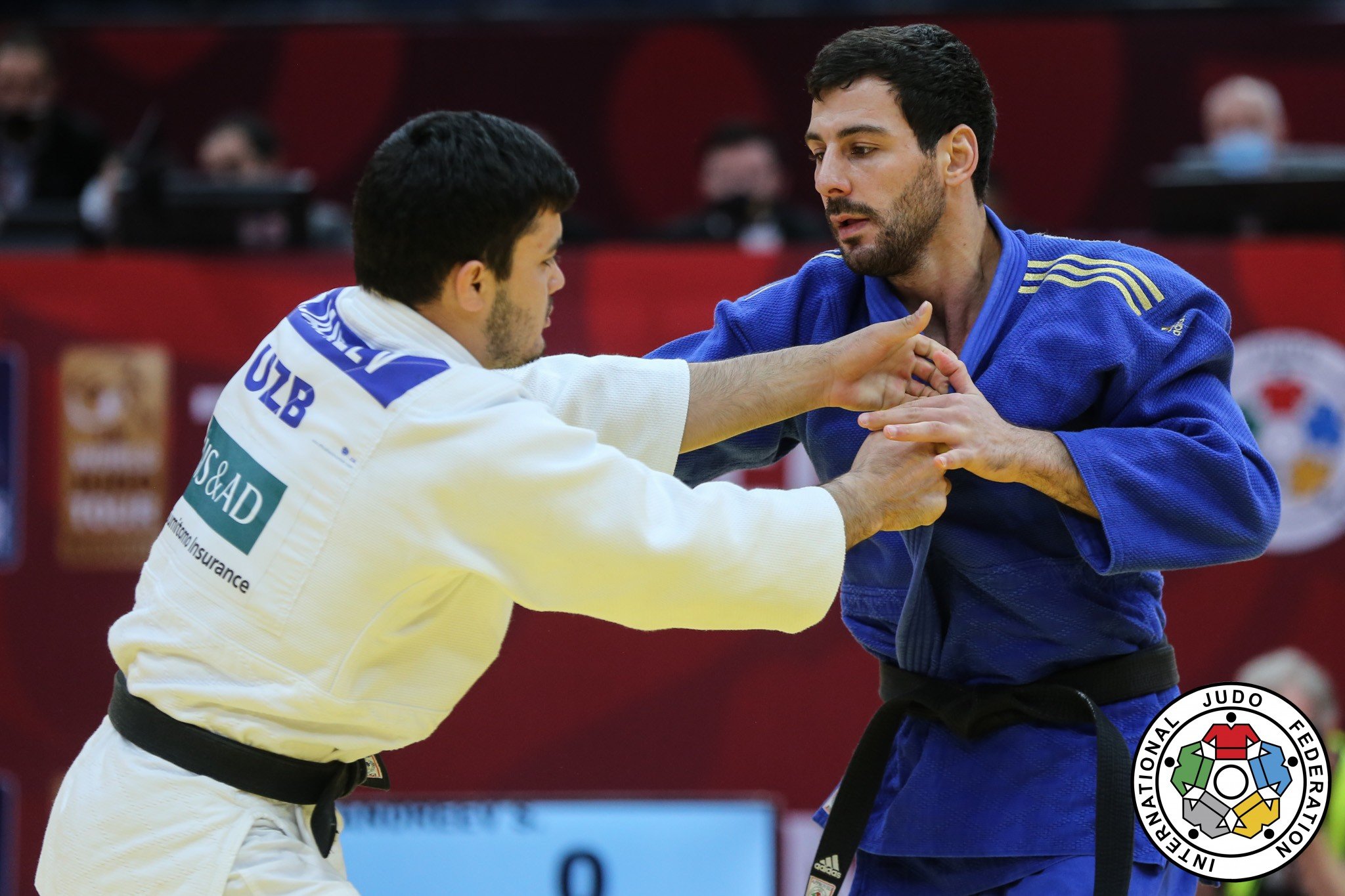 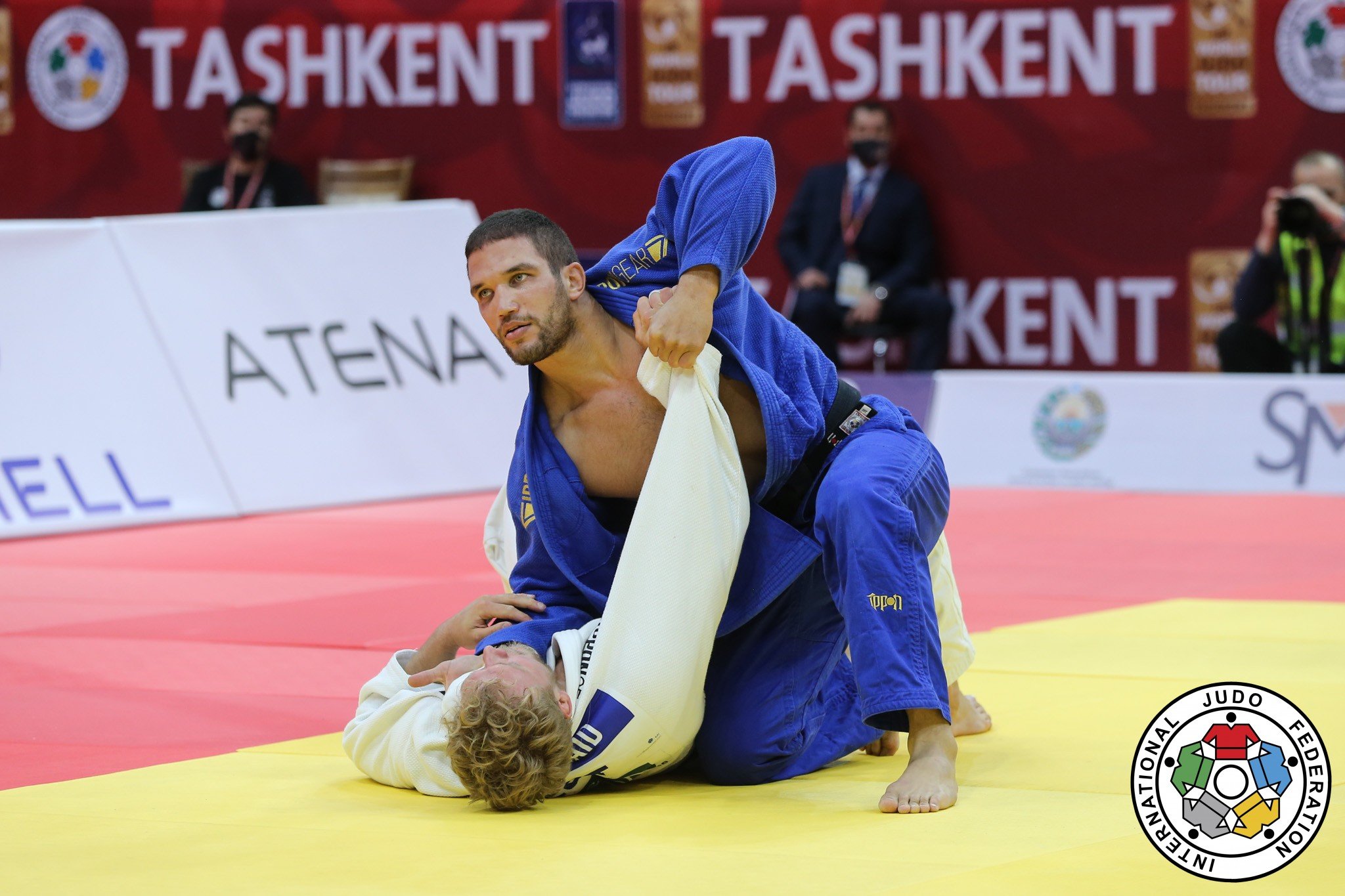 In the +78kg category the top two seeds moved smoothly through the day to eventually do battle for the Grand Slam title. The final was anything but smooth however, as SONE Akira (JPN) collected two shidos to the three picked up by an overly defensive and unproductive Beatriz SOUZA (BRA). There was disappointment for Yelyzaveta KALANINA (UKR) when in the first of the bronze medal contests she was thrown by Nihel CHEIKH-ROUHOU (TUN) with a huge ura nage that for some reason was awarded with waza ari but, nevertheless assured the Tunisian of the bronze medal. Anzhela GASPARIAN (RUS) made her way to the second of the bronze medal contests but was unable to match KIM Hayun (KOR) who applied a neat shime waza for ippon on her Russian opponent.

In the +100kg category the “big two” from Brazil, left without coming close to the final block. Number one seed David MOURA (BRA) failed to trouble the scorers collecting three shidos in his second round contest with Iurii KRAKOVETSKII (KGZ) whilst number two seed Rafael SILVA (BRA) was thrown in round two with sode tsuri komi goshi for ippon by the diminutive Martti PUUMALAINEN (FIN). It was left to giant slayer KAGEURA Kokoro (JPN) to march positively untouched to the final where, in a tightly fought contest, the Japanese was made to wait until there were only four seconds left on the clock before he was able to launch his go to left sided seoi otoshi to throw KIM Sungmin (KOR) for the winning score and the gold medal. After a day of hard work for Ushangi KOKAURI (AZE) he was unable to make things count in the first of the bronze medal contests where he was thrown twice by KIM Minjong (KOR), the second and winning score being a powerful o uchi gari. Erik ABRAMOV (GER) should be pleased with his efforts in this Grand Slam, in particular his bronze medal contest against Temur RAKHIMOV (TJK) whom he threw first with morote seoi nage for waza ari and then his awareness to turn the uchi mata effort from Rakhimov for a second score and his first ever Grand Slam medal.