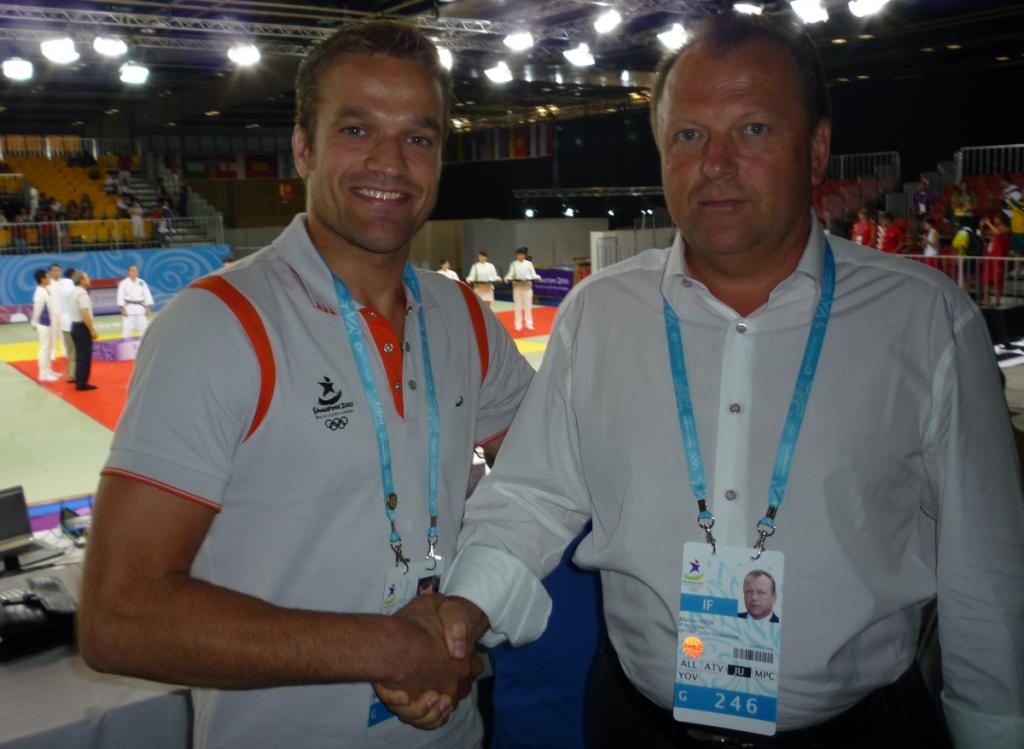 Ruben Houkes was appointed by the IJF and by the IOC Athletes’ Commission as an Athlete Role Model (ARM) at the Youth Olympic Games, held in Singapore from August 14th – 26th, 2010.
The function of the ARMs in Singapore is to mentor the 3,600 young athletes participating in 26 different sports. In addition to their presence at the competitions, the ARMs interact with the athletes and participate in activities during the Culture and Education Programs, which focus on five themes: Olympism and Olympic values, skill development, well-being and healthy lifestyles, social responsibility and expression through digital media.
Athletes at the Youth Olympic Games are encouraged to engage in conversation with the ARMs who attend the competitions, visit the Youth Olympic Village (YOV) and feature in “Chat with Champions” forums designed to inspire and educate the participants with personal accounts of their own dreams and experiences, and the challenges they have overcome.

Six years ago, he started up a program in the Netherlands “Schooljudo.nl”.
“I strongly believe in the values of judo, such as respect, the norms, and cooperation. I think if children do judo for a period in their lives, they will become better citizens. I strongly believe that.”
“Judo is an individual sport, but you have to cooperate with the other. So it’s a beautiful sport for children. I’ve built up that program in the Netherlands, and it’s quite successful. Now I’m part of the Judo For Children commission, within the IJF, working on the same values already mentioned. But there’s also the role model part in that, too. We believe that every country should have its role model within judo because it helps to inspire children. It adds value to judo, and it’s good for the public image of judo in general.”

Houkes faces many challenges as an Athlete Role model: “I think it’s important for kids to have a role model, and I’m willing to be that. So that’s the first step. I think it’s also good that kids can be close to former medalists, because it makes them enthusiastic about going on with judo, it inspires them to make the best of it.”

“It’s nice to communicate with all the kids in the Youth Olympic Village. We’ve been asked to be present on the sidelines at the venues also, but I find it’s harder to interact right before their contest because they’re focused and they’re preparing, so I’ll be there, in the preparation area, but I’m not really insisting on making contact.”

“All of these kids see us, role models, as the ones who’ve done it. Who’ve gained a medal, and they want to know about how you’ve experienced it and what you’ve done for your sport. I’d like to bring over my experience in my sport, and I really like that interaction with the kids.”

The Youth Olympic Games is surrounded by dreams and Houkes used to be one of them dreaming about the Olympic title. “I’ve never been an Olympic champion, but I’ve got a medal… They have their dreams, and they are very enthusiastic about this sport. And events like this, it’s a beautiful event for the first step, up to London or Rio or anything.”
“During my first day here at the venue, I did a judo clinic, a demonstration for kids. I talked to the president of the Federation here and he said judo is up-and-coming. It’s a beneficial sport for children to learn because of the norms and values, and the respect and preparation, so that’s important. And I did some judo with some of these guys… Well, they’re not yet Olympic champions, but they’re getting there!”

Houkes is still an Ambassador for the international humanitarian organization Right To Play and recently became a member of the IJF Judo For Children commission. “Our goal is for judo to be a structural part of the physical education curriculum in every school.

He started up the project in Holland where currently a growing number of more than 250 schools are working with this program: 15-20,000 children.
Houkes: “We’re trying to make the political step so judo will be in the physical education curriculum of every school, but it is not yet the case. The main goal of the Judo For Children commission is to have judo as part of all physical education curricula, so every child can adopt the values of judo, and DO judo, I hope for their whole life, or at least a period of their life.

“This role fits really well because during my career, I didn’t realise exactly what the impact of my medal was. I was focused on my sport, on the competition, and I wanted to be the best. But then there was one particular moment, when I realized what I could do for children, to inspire them. I was handing out medals at a youth tournament. I was walking around and I saw a kid do a beautiful seoi nage, a shoulder throw. So, I complimented him and said, “It was a nice throw, you did well!” Then a few months later, I heard, “Hey, you were at such-and-such a tournament and a kid was really excited about you saying that he did a beautiful thing.” And I thought, “Wait a moment. It’s important for me, as a model to be there for the children.”

Houkes was pleased to be invited by the IJF and experienced the impact of the Games. “These games are like the senior Olympics. From the venues, to the security, to the competitions… I think that’s perfect because all the kids will learn what the Olympics are about. It’s one of the most amazing things that I’ve done in my career, being an Olympic participant. It’s not comparable to anything else: not the Worlds, the Europeans or the Nationals or anything. The Olympics are special. They give off a special vibe, the world is watching, you know it. That makes it unique. And everything here certainly looks like the Olympics!”

Houkes is impressed by the cultural program of the Games: “There is a lot of interaction in Youth Olympic Village, because in the center of the village where they have the cultural and education programs, all the kids come there and mix together. Each athlete has a map of the village with some goals they have to accomplish. For example, they have to make 10 new friends, they have to chat with the champions, and they get a sticker for that. It’s all based on the Olympic values of respect, friendship and excellence.”