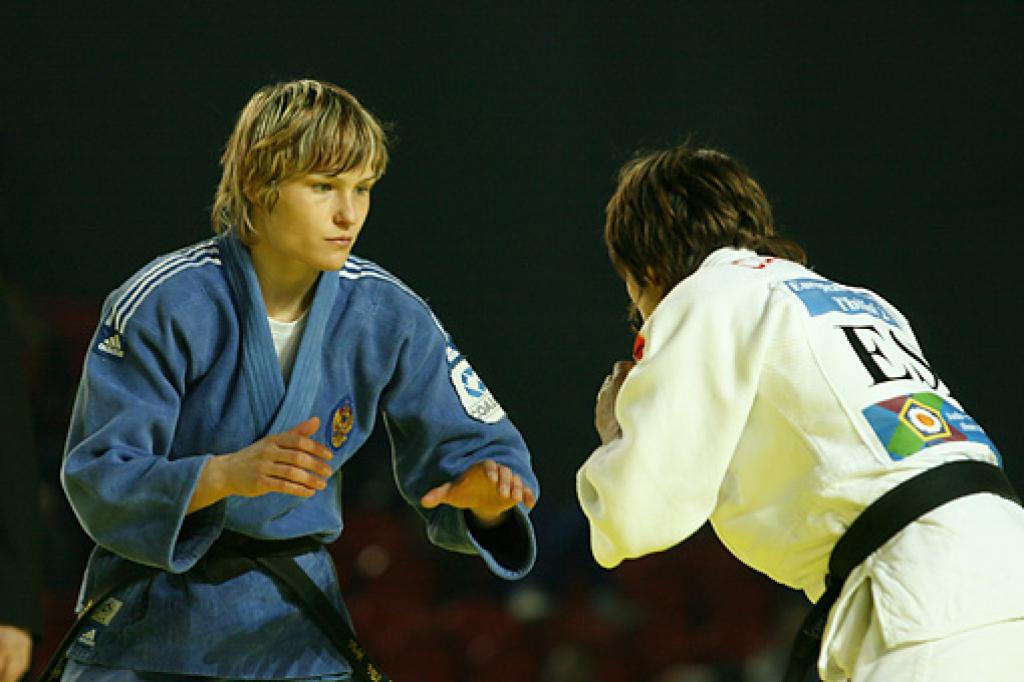 Lupo Paischer (AUT) defeated Beslan Mudranov (RUS) in the semi final. Mudranov surprised Hovhannes Davtyan (ARM) in the quarter final, but couldn’t deal with the fantastic Lupo… and the fantastic crownd supporting their Austrian Proud. Paischer will fight Sofiane Milous in the final.

In the women’s U48kg Eva Csernoviczky (HUN) Alina Dumitru (ROU) are in the final, so the favourites have qualified.
Liudmila Bogdanova (RUS) lost to the Hungarian women in the semi, same for Oiana Blanco (ESP) who was defeated by the Olympic Champion Dumitru.

Defending European Champion U52kg Natalia Kuzyutina (RUS) pictured Rosalba Forciniti. The Italian is the surprise in this category. She defeated Turkish Champion Samat Aynur in the quarter final and Penelope Bonna (FRA) in semi final.
Kuzyutina beat Ilse Heylen (BEL) in the semi final and can prolong her title.

In the class U57kg the first upset today was the loss of World Champion Morgane Ribout of France who lost to Juul Franssen (NED), the vice world champion U20 years who beat her by ippon.
Franssen reached the semi final but lost to home favourite and 2008 European Champion Sabrina Filzmoser. She defeated world junior champion Hedvig Karakas (HUN) in a tough long lasting fight and was able to stand the Dutch talent.

Triple European Champion Telma Monteiro (POR) lost to Olympic Champion Giualia Quintavalle (ITA) who had never won a European medal, but in the semi final she lost the first opportunity losing to Corina Caprioriu (ROU) who was also one of the favourites in advance. The Romanian will now face Filzmoser who’s back on track after giving it a try in the U63kg last year. A great day for Austrian judo with two finallists and Mitterfellner for bronze.