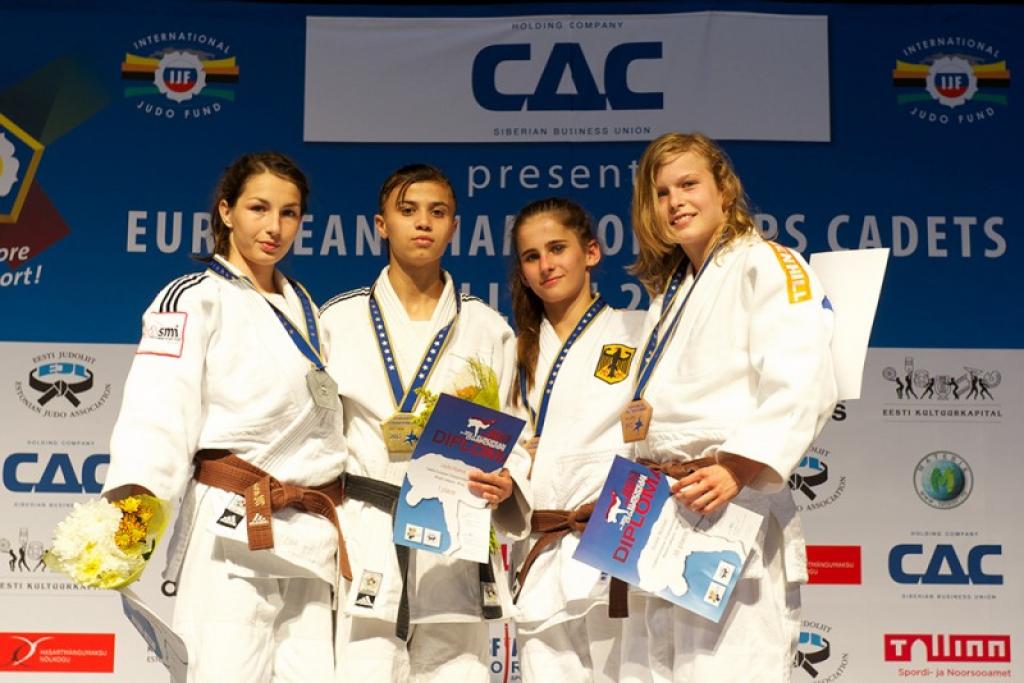 Azerbaijan is the winner of the opening day of the European Championships for Cadets. Azerbaijan performed well with two gold medals for Leyla Aliyeva and Hidayat Heydarov. The Italian men won two gold medals by Angelo Pantani and Elios Manzi.

Angelo Pantano finally took the European title. The tony Italian fighter was able to defeat Dutch Mathijs van Harten in the final U50kg. Pantano was today’s strongest despite good fighting of the Dutch who was a surprise in this category. The score was equal for a long time but in the last minute Pantano benefit of the two penalties for Van Harten.

Pantano defeated Khazar Hasanov (AZE) in the semi final, but Hasanov also lost his second match, in this case for bronze. Robizon Belglarishvili won the first bronze medal followed by Natig Gurbanli who was defeated by Van Harten in the semi. Pantano won four matches today and had already won the European Cups in Zagreb and Coimbra this season as well as the Italian cadet and junior title. Last year he finished fifth. Pantano didn’t know what to say, so happy he was. His opponent Van Harten said: “I am happy to have come second. It was a close match. I wanted to win. This is my first time competing at the European Cadet Championships and it was almost perfect for me.”

Elios Manzi completed the Italian party with a rock solid match performance today. The final U55kg was Ilkin Babazade from Azerbaijan, the number one of the European Ranking List. Manzi won all of his five fights, the last two against opponents from Azerbaijan and the quarter final against peter Miles (GBR) who won the bronze. Also semi final opponent Taghizade won bronze which made Manzi a true winner. Also he won the tournaments in Zagreb and Coimbra in the spring of this year. Last year he was defeated in the first round after he was the defending champion. Now he regained his title and helped Italy to the first place after the first day. Manzi: “There is only one thing I can say: You have to believe in your dream. My father is here watching and my mother has been watching from home.”

Rugat Taghizade of Azerbaijan won bronze against Armenian Shahen Abaghyan and ended the match with a victory and fair hug for Abaghyan.

The first gold medal in the women’s division was for Leyla Aliyeva of Azerbaijan. She defeated French Marine Gilly in the final for girls U40kg. It was ten years ago that Azerbaijan won a gold medal for women at a Cadet European Championships. This season Aliyeva is on  fire with the European title and two victories in the European Cup tour. She won gold medals in Teplice and Bielsko Biala.Sarah Herrmann of Germany was very happy with a bronze medal after her win against Turkish Rumeysa Yayla. Dutch Aniek Norder lost to Gilly in the semi final but won in the golden score against Tsvetelina Tsvetanova (BUL). The 14-year youngest medallist won two silver medals in the tour this year but this bronze medal tasted sweet like gold.

Anastastia Turcheva of Russian defeated Rabia Senyayla of Turkey in the final for women U44kg by a splendid seoi-nage. The 15-year old Russian was overwhelmed by emotions after her great victory and could celebrate four wins today in a field of 19 judoka. Turcheva who was today’s youngest winner said: “My coaches prepared me really well for this event and I was training better than last year so I was able to improve.”

Turcheva was the second highest seeded behind Marusa Stangar (SLO) who lost the semi final by hansokumake and didn’t fight for bronze. Stangar may have been the strongest in the pre-season and also fought two good fights in the beginning but Rabia Senyayla was the winner in the semi final. The Turkish fought well against Turcheva but she needed just one moment to strike. Melisa Cakmakli won the second Turkish medal and Amber Gersjes continued to win European medals. The European Champion of last year U40kgs was now able to claim a bronze medal U44kg and gave herself a nice early birthday gift.

The finallist said: “I did not expect to finish second, although coming here, I had hoped to be on the podium. I am a little bit disappointed that I lost so narrowly. It was my first time at this event and I want to work harder to improve next time.”

Eloise Combeau of France was today’s best U48kg against Andreja Leski of Slovenia. The French won her four fights and was the number six  of the ranking list. So not the favourites won in this category. Leski was the number three.

Combeau: “To have a team like that and friends like that behind me is what pushed me to victory today. My next goal is to win a medal at the World (Cadet) Championships.”

Leski said: “This is the best result of my career so far. I learned that I need to concentrate more on the final.”

Combeau defeated the highest seeded Reka Pupp (HUN) in the semi final. The Hungarian lost the bronze medal fight against Kristina Shilova (RUS). Mzia Beboshvili won bronze for Georgia against Betina Temelkova (BUL). For Georgia it was the first ever medal for a woman in the European Cadet Championships history.

Beboshvili: “Now I want to work even harder so that next time I can win the gold and be the first one to do so. When I saw judo, I knew immediately that this is what I want to do. My parents didn’t want it and still don’t want it, but I really wanted to do it, because it is a sport that men do.”

Azerbaijan counts many title, after today 20. Hidayat Heydarov completed the successful day of the Azerbaijan with a gold medal. As expected the nation won many medals at the traditional strong first day, but five medals is still impressive.  Heydarov gave a stable impression and even defeated number one seeded Bogdan Iadov (UKR). Heydarov was also the strongest this season in Antalya and Berlin. Today he counted 39 opponents and defeated five of them in direct fights.

The winner said: “It is just great (to have taken Azerbaijan’s second gold medal of the day). My toughest match today was the semifinal.”

His wins included strong Israelian Daniel Ben David in the semi final and Neil MacDonald of Great Britain who were both the bronze medal winners. For Britain two medals today, the most promising start on the first day ever for the young men.  Usually the women set the tone, now the men met the expectations of the coaches and fans.

Finallist Iadov added “I have mixed feelings. On the one hand this is my first medal at this level and I am happy about it, but on the other hand I wanted to win the gold, obviously. When I got into the final I relaxed too much, because I knew I had a medal. Next time I won’t relax.”

Watch all pictures of the first day in Tallinn in our media gallery.