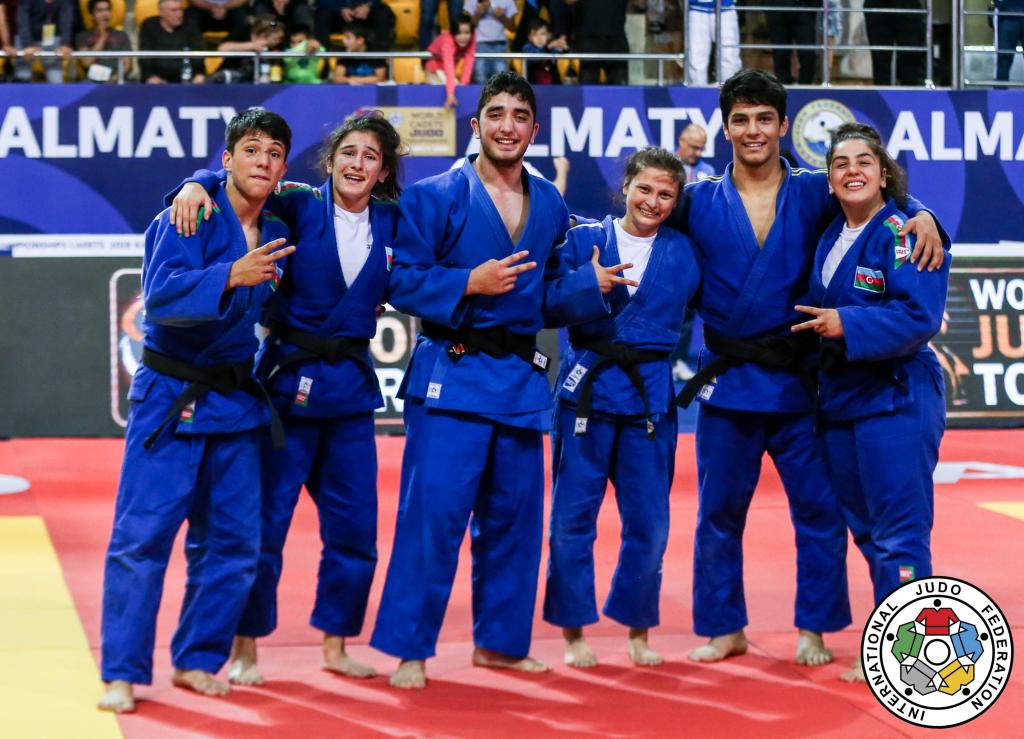 The fifth and final day of the Cadet World Championships being staged in Almaty, Kazakhstan saw Japan take the team event gold medal ahead of a spirited effort from Azerbaijan. As is always the case, the team event offered up a degree of excitement, suspense, drama and spectacular action that at times left the crowd gasping with astonishment.

Round one saw early departures for the teams of France and Germany whilst the teams of Russia and Turkey had first round byes. Azerbaijan made hard work of their first-round encounter with Chinese Taipei. This turned out to be a nerve-racking spectacle ending in a 3-3 draw followed by a golden contest to determine who would take a place in the semi-final. In the end it was Sabina ALIEVA (AZE) in the -48kg category who when called upon in the golden contest random draw defeated SHEN Li Chun (TPE) to put Azerbaijan in the quarter final.

The quarter-final line up saw Azerbaijan move smoothly passed Australia 4-1 to take their place in the first of the semi-finals. Russia meanwhile had an epic golden contest battle against Brazil. After the 3-3 tie it was the +81kg category that was picked to settle matters. Nodar ONOPRIENKO (RUS) stepped up to defeat Bernado ROSA (BRA) to put Russia into the semi-final to face Azerbaijan. In the top half of the draw Turkey overcame Mongolia 4-0 to set up a semi-final match with Japan.

The semi-finals began with the -81kg category and it was a rampant Ikhvan EDILSULTANOV (RUS) with a te waza counter against Vugar TALIBOV (AZE) who gave Russia the early lead over Azerbaijan. Liubov ORLOVA (RUS) increased Russia’s lead when she threw Narmin AMIRLI (AZE) for waza ari with ko uchi gari. And things became absolutely dire for Azerbaijan when Ruslan SAFKHANOV (RUS) had to tap out from a shime waza applied by Onoprienko making the score a daunting 3-0 in favour of Russia. It was from this point that the Azeri revival kicked in and who better to step up than the diminutive Sabina Alieva who Daria ZAKHAROVA (RUS) Next up was Kamran SULEYMANOV (AZE) Rizvan MAGOMADOV (RUS) It all came down to Iana RADCHENKO (RUS) to finish the job or Aytaj GARDASHKHANLI to tie things up and take the match into a golden contest. And when at last the big-screen graphic ceased rolling it showed -48kg, the Azeri team began jumping up and down and it would be Zakharova to once again face the Azeri heroine Alieva. The Russian team, having won a golden contest match in the previous round now had the roles reversed and it was Azerbaijan, in a stunning comeback to match any that most have witnessed, who went to the final.

The bronze medal matches and the final began with the +63kg category followed in order by the +81kg and so on. The Russian team to their credit bounced back well from their semi-final defeat at the hands of Azerbaijan to take a bronze medal in a fairly straightforward win over Uzbekistan 4-0.

The second of the bronze medal matches featured Brazil and Turkey. It was a tall order for Hilal OZTURK (TUR) to take on Anna SANTOS (BRA) the gold medal winner in the +70kg category and unsurprisingly Brazil a 1-0 lead. Kayo SANTOS made it 2-0 when he defeated Munir ERTUG (TUR) and the Brazilians took a step closer to securing the bronze when Alexia NASCIMENTO (BRA) defeated Buketnur KARABULUT (TUR) to take the score in the match to 3-0. But Turkey had already experienced a comeback in their 4-3 golden contest loss to Japan and Muhammed Demirel pulled one back for Turkey when he threw Felipe LIMA (BRA)with ko soto gake for waza ari and then held the Brazilian with kesagatame. Maria DINZ (BRA) did her best to hold off the -63kg category gold medal winner Habibe AFYONLU (TUR) but the Brazilian collected three shidos and the score went to 3-2. It was Musa SIMSEK (TUR) who tied things up 3-3 when he threw Gustavo GOMES (BRA) for waza ari then moments later catching the Brazilian again with ura nage for ippon. Once again, the crowd were on edge as they watched the two teams line up in the centre of the tatami to wait for the big screen to show the weight category that would be drawn for the golden contest. This time it was the -60kg category. Lima would go up against Demirel. There were pre-match celebrations from either side, no indication of which team felt more confident than the other that their man could get the job done. The golden contest began with both athletes very cautious, there was very little to choose between the pair. However, after a little over two minutes of golden score it was Demirel who caught Lima with an ura nage that saw the Brazilian reaching with both hands behind himself in an effort to break the fall thus conceding waza ari, the contest and the match Turkey celebrated a 4-3 golden contest win and a bronze medal.

As for the final, well unfortunately there were to be no heroics for Azerbaijan against Japan who at the start of the day had seemed surprisingly vulnerable but, in the end, turned out to be an efficient young Japanese team who, to be quite honest, swept past Azerbaijan to take the world cadet team championships by a score of 4-0. Azerbaijan having to settle for a very hard fought and extremely entertaining silver.