BABULFATH LOOKING TO DOUBLE UP MAJOR TITLES IN SARAJEVO 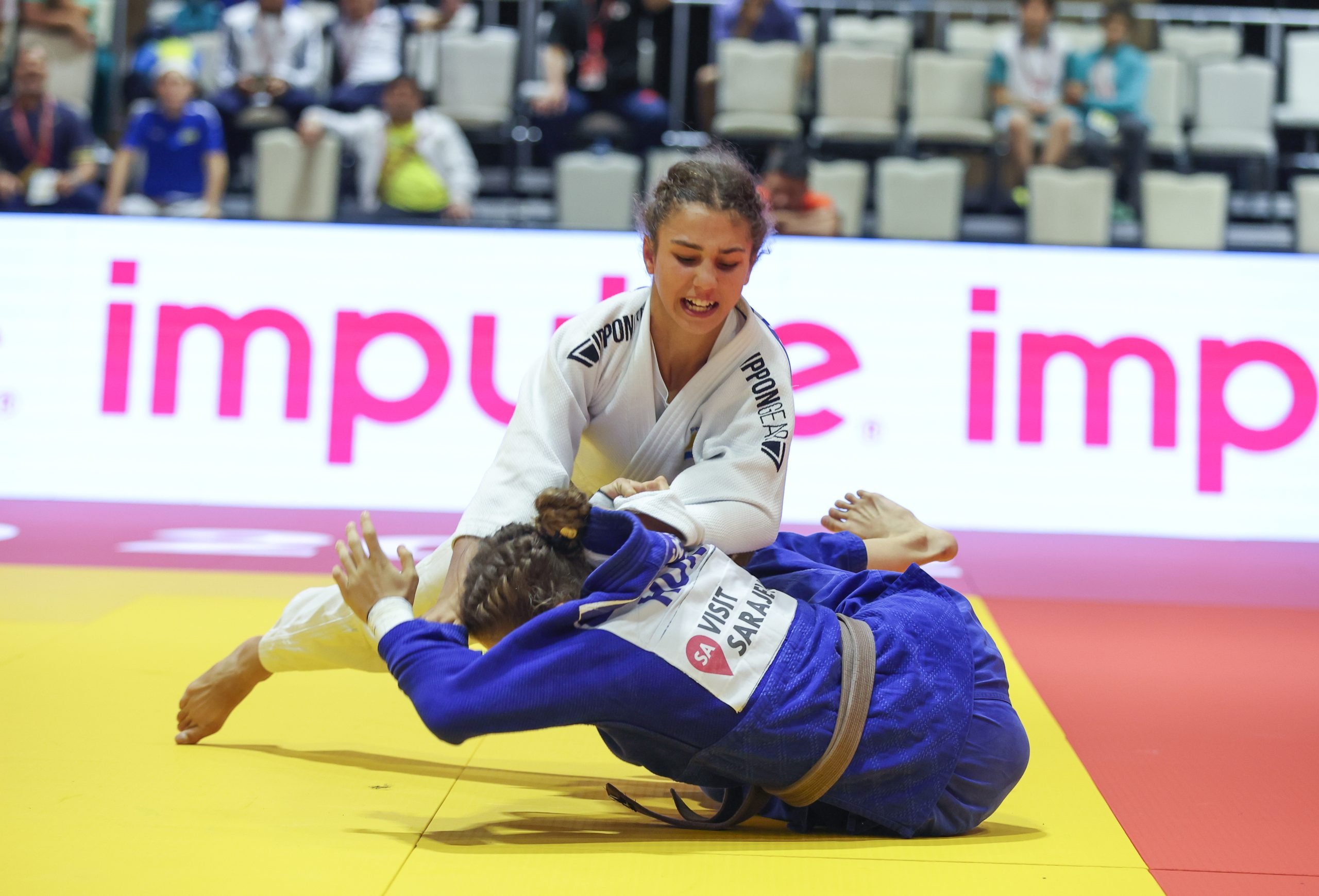 The first of the semi finals was between the -60kg number one seed, Nizami IMRANOV (AZE) and Davit KARELI (GEO). Without the gi, one could have mistaken this for a wrestling bout, the styles so similar. Unfortunately it was a case of disqualification for the cadet European champion, Imranov and was quite the upset. There was no evidence of ill intention but the fluid movement of his attacks resulted in a risk to their safety which is paramount. Kelvin RAY (FRA) was the next European to take a place in the -60kg, after having already scored waza ari earlier, a maki komi secured his medal and bid for the world title, a possible third gold for the French team.

MIYAKI Kano (JPN) worked hard in the -48kg semi final against Illaria FINESTRONE (ITA) and scored waza ari with an impossibly low uchi mata. The Italian simply couldn’t get close enough to land a scoring attack and was forced to settle for a bronze medal contest. Miyaki may have a much different experience in the final against Tara BABULFATH (SWE).

Babulfath took VEG Luca (HUN) to ground on numerous occasions but in the second half of the contest she managed to secure the hold and a long 20-second countdown brought her the place in the final. It was a nice finish for the pair, Babulfath having experience training in Hungary herself but she needed that win. Earlier this year she took the cadet European title and missed out on EYOF as she was competing in the junior European cup in Prague where she took gold. It will be an interesting final and certainly exciting for the young Swedish athlete who could take yet another major title in 2022.

Saba SAMADASHVILI (GEO) was quick to take his place in the -66kg final, an early score followed by another waza ari-scoring low tai otoshi within 50 seconds put him in to the gold medal contest. On the adjoining tatami, Njiat NAGHIYEV (AZE) was the other European hopeful as he faced Shohjakhon OTABOEV (UZB). The pair were relatively well matched, though Otaboev picked up two shidos, then with only 7 seconds left on the clock, Naghiyev fell victim to a single waza ari score, and next to no time to recover. The Azerbaijani will compete for bronze.

Anna TIELIEGINA (UKR) was striving in her semi final against Sugdiyona RAFKATOVA (UZB) but it turned in to an exhausting golden score affair. It was a terrific bout but Rafkatova took the final place based on shidos.

Italy’s number one seed and probably greater hope at the world title, Michela TERRANOVA had a surprisingly early exit in the European championships but was again knocked out of the running for gold in the quarters. On the other hand, Gaia MASSIMETTI (ITA) resurrected their dreams of hearing the national anthem by securing a semi final win against Yi-Hsi SHEN (TPE). It was another golden score contest which resulted in an accumulation of shidos.

The final block will once again commence at 16:00 local time with live streaming available at live.ijf.org.