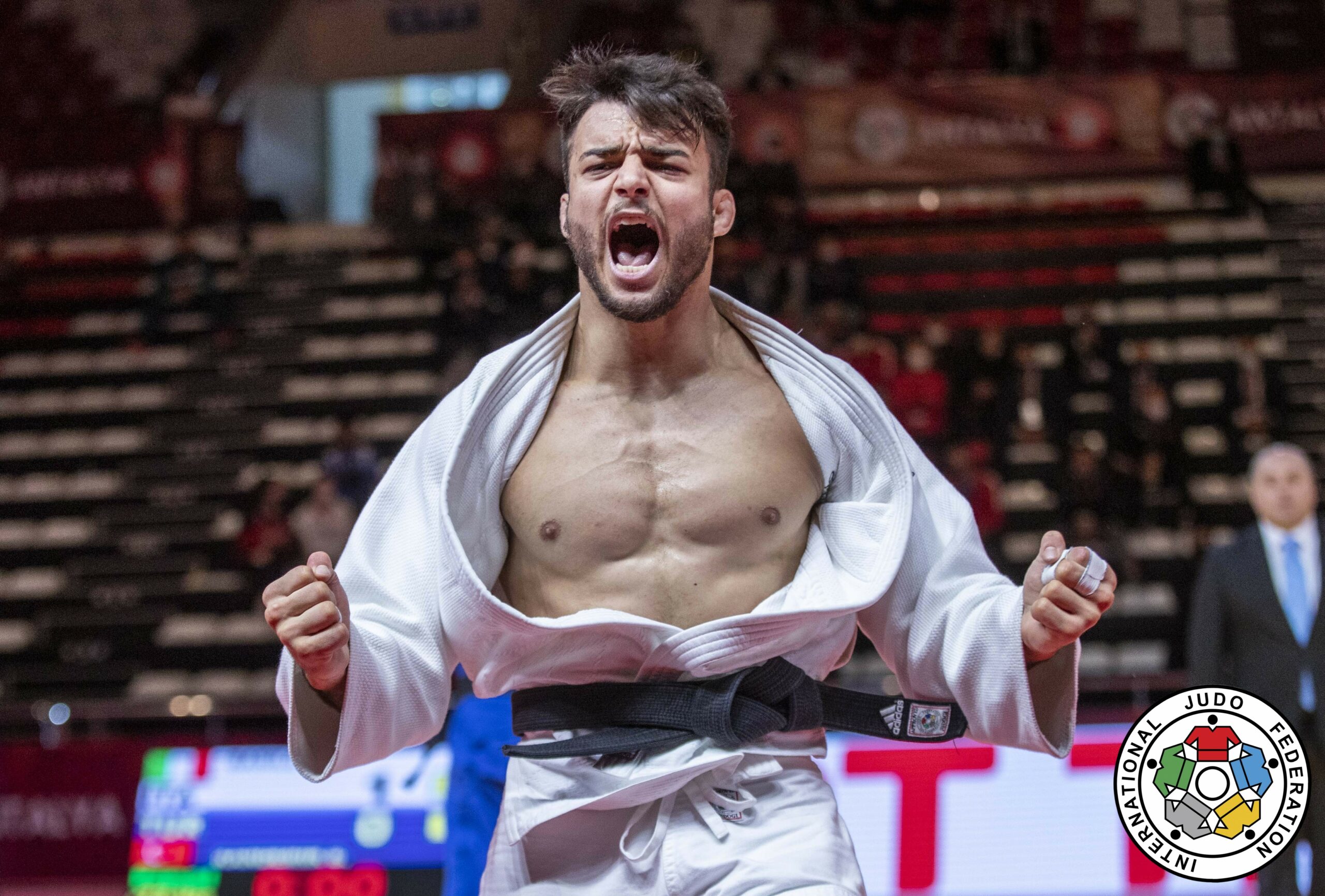 It took six years and travelling to ten cities but finally, Fabio BASILE (ITA) achieved one of his goals, that of winning a Grand Slam gold medal. The 26-year old Italian did so quite convincingly in the -73kg category by defeating among others current European champion Victor STERPU (MDA) and former Pan-American champion and number one seed here Arthur MARGELIDON (CAN). After six fruitless outings over the past 14 months, Basile (the current Olympic champion at -66kg) arrived here almost desperate to be on the podium. In the biggest surprise of the day it was IJF Tour rookie Bayram KANDEMIR (TUR) who made his way to the final to face Basile. Perhaps as a result of nerves on Basile’s part or, perhaps as a consequence of Kandemir’s yet to be tested raw talent, the Italian gave a somewhat restrained performance in a final that he won with a single score that came from an uchi mata that only just warranted a score. But Basile won’t be concerned about that. He has the gold medal that he was looking for and the points that go with it. In the first of the bronze medal contest number four seed Victor STERPU (MDA) defeated Adam STODOLSKI (POL). In the second of the bronze medal contests Arthur MARGELIDON (CAN) defeated number three seed Tommy MACIAS (SWE).

Lucy RENSHALL (GBR) gave her Olympic qualification hopes a huge boost when she took the gold medal in the -63kg category on the second day of the Antalya Grand Slam. Renshall defeated three of the top eight seeds on her way to taking her first ever Grand Slam gold including number one seed Catherine BEAUCHEMIN-PINARD (CAN). In the final Renshall had to wait until the second minute of golden score before she was able to come up with her favourite ko uchi gari for the score that brought her her first ever Grand Slam gold medal. In the shoot-out between the two Chinese athletes for the first of the bronze medals it was TANG Jing (CHN) who scored an early waza ari with left uchi mata. However, YANG Junxia (CHN) picked up a hamstring injury and was unable to continue. Having won gold in Tbilisi last weekend Catherine Beauchemin-Pinard cannot be too disappointed (after her loss to Renshall) at collecting the second of the bronze medals when she defeated Gili SHARIR (ISR).

In the -70kg category Kim POLLING (NED) continues her battle to be chosen as the Dutch number one when she picked up her 5th Grand Slam gold medal. Seeded number one, Polling had to face Barbara MATIC (CRO) in the final where she threw the Croatian twice within two minutes. In the first of the bronze medal contests Elvismar RODRIQUEZ (VEN) defeated Gulnoza MATNIYAZOVA (UZB) and in the second, it was Maria BERNABEU (ESP) who overcame a spirited effort by 21-year old Minel AKDENIZ (TUR).

Day two ended with a gold medal for Turkey in the -81kg category when in the final Vedat ALBAYRAK (TUR) defeated Christian PARLATI (ITA). Seeded number one, Albayrak picked up his second Grand Slam gold and keeps him firmly in the top five in the world. In the first of the bronze medal matches Murad FATIYEV (AZE) defeated Antonio ESPOSITO (ITA) whilst in the second it was UNGVARI Attila (HUN) who narrowly defeated Robin PACEK (SWE).