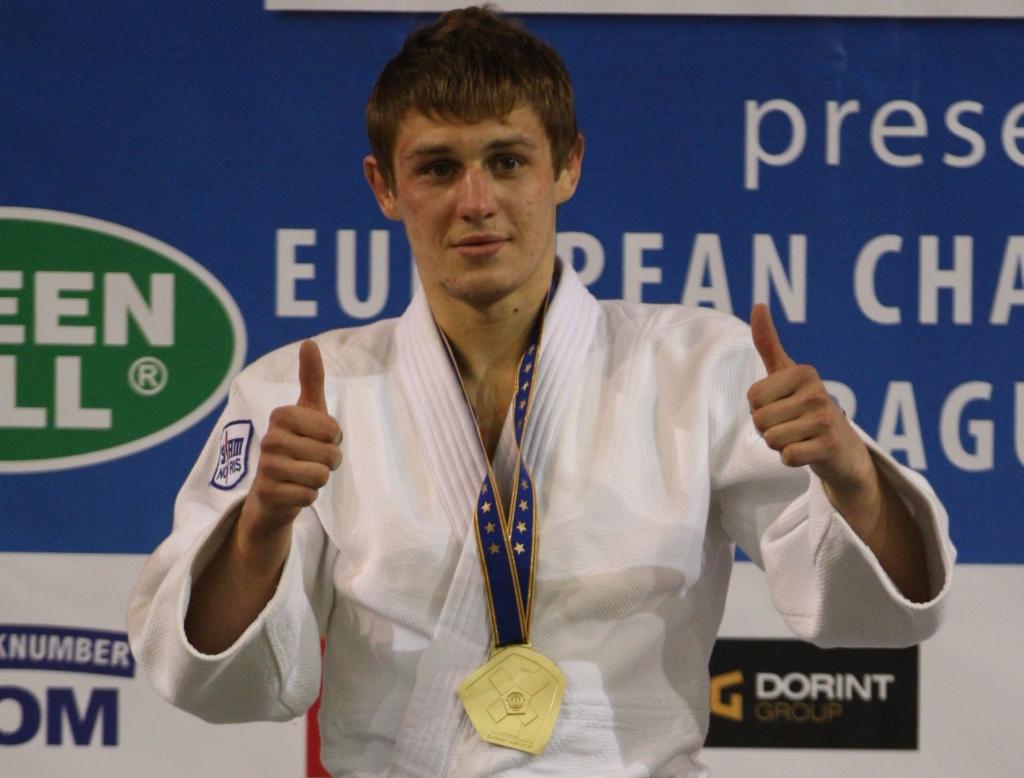 At the first day of the Green Hill European U23 Championships five different nations won the gold medals.
At the final U60kg Aram Grigoryan (RUS) defeated Gevorg Khachatrian (UKR) for the gold medal. The difference in the match was close and after four minutes nothing was decided despite two penalties for both fighters. Good groundwork by both fighters in the last minute didn’t lead to a score but the received the applause of the judo fans.

Grigoryan coached by 2001 World Champion Vitaly Makarov couldn’t make a difference in the first five minutes but came close 30 seconds later in the golden score but wasn’t awarded with a score. But not much later Khachatrian received a second penalty for impassivity. Three years ago in 2009 Khachatrian won a bronze medal at the European U20 Championships and a silver medal is a good progression. Grigoryan won a bronze medal at the Junior European Championships U55kg and progresses well knowing he won the European title U17 in 2008.

This year Grigoryan won the European Cup of Celje and the national U23 title in Russia. The European title is the crown on his work in this category where his compatriot Arsen Galstyan is the current Olympic Champion. Last year the Russian men claimed four European titles and we have just started.

Italian Fabio Basile won the bronze medal by surprising Grigor Ivanyan (ARM) in the bronze bout. His rival and compatriot Carmine di Loreto lost his bronze match against Orkhan Safarov (AZE) in the last seconds when Safarov struck with a yuko difference.

The last European U23 winner from Russia in this category U60kg was Shamil Nash in 2006 in Moscow.

Vadzim Shoka is the pride of Belarus with European title

What a surprise in the final for men U66kg. Vadzim Shoka is the pride of Belarus winning the title fpr his country. In the final he was able to defeat Gor Harutyunyan of Armenia in a great match. First of all it was Shoka who led the match by waza-ari but then Harutyunyan came back and even scored an additional yuko. But Shoka fought back and controlled Harutyunyan in the last minute of the match on the ground and immobilized the ambitions of the Armenian. Shoka shouted out his great victory and the support from his teammates was well deserved. Today 38 nations were at the start and Shoka won all five fights in a field of 34 participants.
This year Shoka won the national U23 title and won the national senior title, but just missed out on the medal at the world cup in his own nation in Minsk in October finishing fifth.

Harutyunyan has a good reputation at European Championships. He won the Junior European title in 2010 and 2011 but finished seventh at the U23 event in Tyumen last year. This was a good comeback for the Armenian but not the desired gold medal.

Hungarian Zsolt Gorjanacz prolonged his bronze medal of last year. He was happy with the medal at this level with in total 34 participants. For bronze he defeated Alexander Weichinger of Austria. He won four of his five matches but lost in the semi final against Vadzim Shoka (BLR).
Abdula Abduldzhalilov claimed the bronze after he defeated his compatriot Anzaur Ardanov. Both weren’t coached at all in their last fight. Abduldzhalilov led the match the whole time and score an additional waza-ari in the last few seconds to win the bronze medal. In September Abduldzhalilov won the World Cup in Tashkent and Ardanov finished fifth.

In the tradition of his country Belarus this title was won by good future judoka. Andrei Kazusionok won the first title for Belarus in 2005 in Kiev, in 2008 Aliaksandr Stsiashenka followed winning the title U81kg. Both judoka won a medal at a senior European Championship, so a good outlook for the 22-year old Shoka.