Belgium tops the table after day one in Armenia 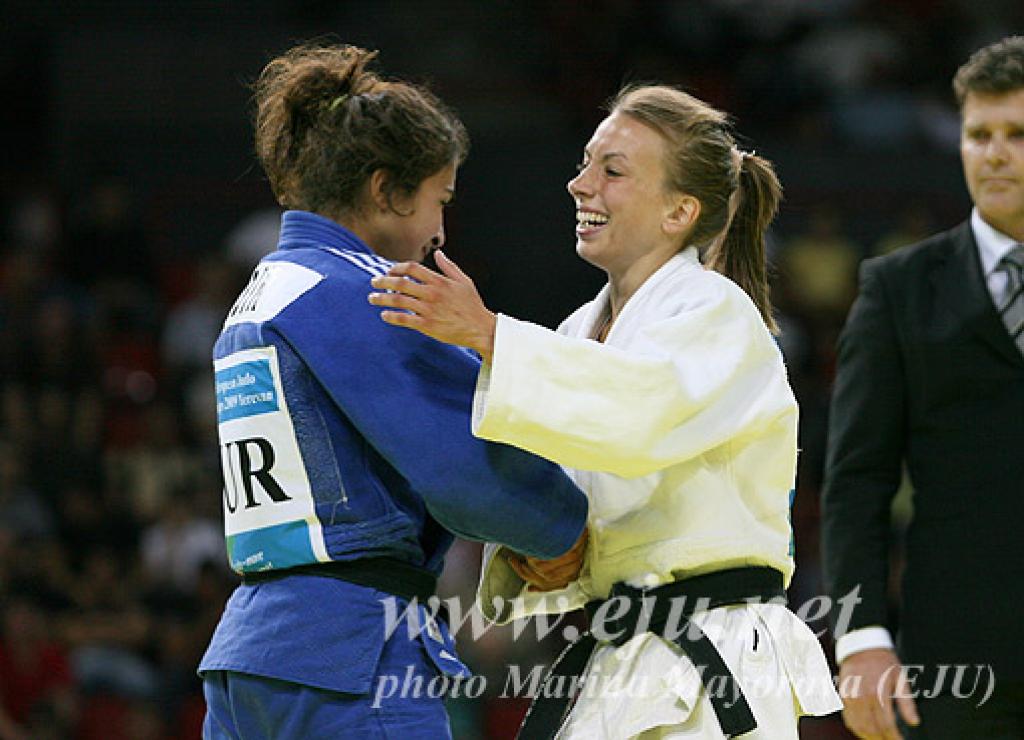 Belgium is topping the table after day one of the European U20 Championships in Yerevan, Armenia. The Belgian ladies Anne-Sophie Jura and Charline van Snick where the only two Belgium female participants, and both won the gold medal.
The last time Belgian who won the European title was in 2000 by Marie Elisabeth Veys. One year before in 1999 Belgium won a total of two gold medals as well by Brigitte Olivier and Ann Simons.
Ulla Werbrouck was the most successful junior ever winning three European junior titles.

17-Year old Jura started well with two victories U44kg. In the final she defeated Diana Kovacs (ROU) who had won a number of U20 titles this year. Jura made the difference with a yuko.
Jura (17) is the youngest winner of the gold this edition.

Her compatriot Charline Van Snick won the U48kg category by beating Derya Cibir in the final who finished second last year in Warsaw as well. Van Snick gained two spots at the podium, last year she finished third. Van Snick had won seven international tournaments this year and was one of the major favourites for the title.

Majlinda Kelmendi was one of the great surprises at the first day of the European Championships. Albania, nor Kosova had ever won a European medal before. Now Kelmendi, born in Kosovo, won the European title defeating Barbara Maros in the final.
Kelmendi (18 years) already participated at the senior World Championships in August.
Maros makes progress every year, as this is her fourth participation, always in the top seven, improving from 7th, 3rd, 5th and now to the second position and still just 18 years.
Tina Zeltner (16) won the bronze for Austria and is the youngest medal winner this edition.

In the men’s categories all gold medals where won by former Soviet countries. Gold U55kg for Victor Achkinadze (RUS) who beat Ilgar Mushkiyev (AZE).
Achkinadze is the 25th winner of the European title for Russia.

Artem Bulyga won the gold beating Enrico Parlati from Italy who could have won the first male gold medal for Italy at European Junior Championships since 1999 when Vincenzo Ascolese was the successor of Girolamo Giovanizzo U60kg. But Parlati lost and Bulyga was grateful to be the successor of Artem Vasylenko who took the gold medal last year U81kg.