BELGRADE PROUD OF ORGANISATION AND REFEREEING 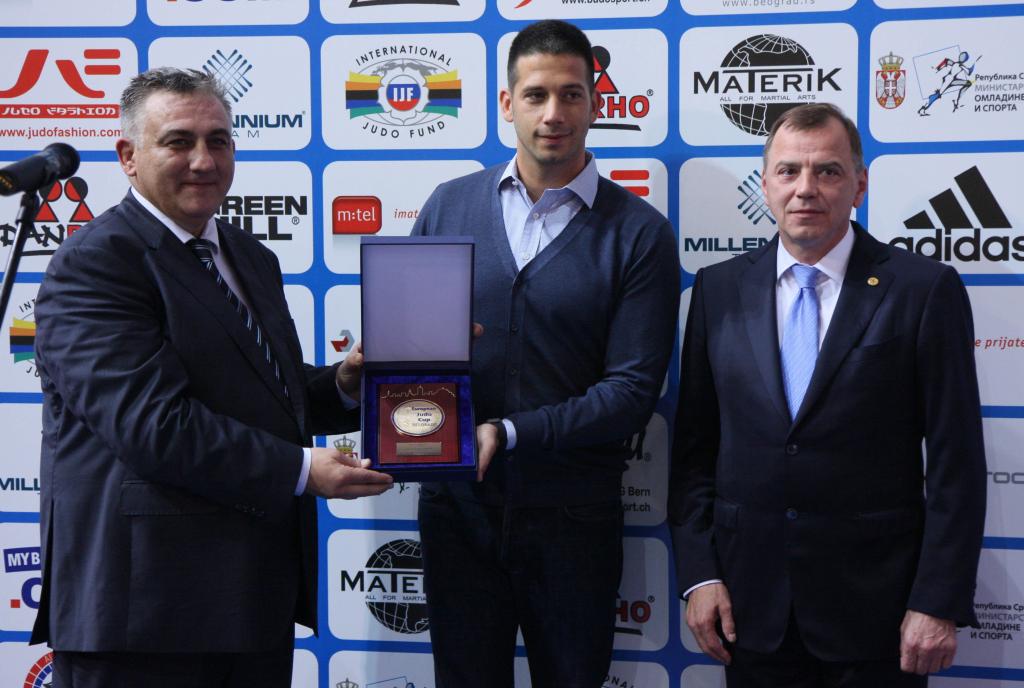 “It was very good and especially the level of refereeing I would like to mention. Because of the examination of the IJF License here in Belgrade the level was the best ever. It was a pleasure to have so many guests and also a good media attention in the newspapers, radio and TV and on various websites. This event has grown to a stable European Cup and we save our ambitions for the next Olympic cycle where we would like to organize a Grand Prix. Our organization is ready, but we must not forget that we should also have the athletes who can win a medal at such level, so we still have some time before the next step.”

The European Cup was won by the French team with four titles. On Sunday the heavier categories were scheduled and Bulgaria had the pleasure to take the first gold medal of the day.

In the men’s category U81kg Bulgarian Ivaylo Ivanov made a strong impression the whole day. He reached the final with four victories against Mark Stoica (ROU), Yoann Benjamin (FRA), Peter Zilka (SLV) and Bojan Dosen. In the final his opponent was Italian Gesualdo Scollo. Ivanov opened the score with yuko and countered to the end. The 21-year Bulgarian collected the first gold medal for Bulgaria. Yesterday Gerchev and Yanakov won silver and bronze U60kg. 33 Participants in this tough category with some spectacular ippons today. Belgian Jeremie Bottieau won bronze after Dosen Bojan lost by hansoku-make, last year he won the bronze. Yoann Benjamin won bronze for France in a tough match against Gasper Jerman.

German talent Lisa Dollinger needed just a minute and twenty seconds oseikomi to defeat her French opponent Lucie Perrot. The German number three of the national senior championships, took her first senior victory. The 19-year old was in Belgrade as preparation for the World Junior Championships in Abu Dhabi in October, a successful warmup.

Dutchman Rico Harder opened the final U90kg with a waza-ari against Dario Kurbjeweit Garcia from Germany. After three minutes he added a yuko, close to waza-ari and was in control and finished the match with an armlock. Harder defeated four opponents today. Via Predrag Stanjevic (MNE), Bosko Borenovic (SRB) and David Kukavica (SLO) he reached the final. He captured the second gold medal for the Dutch men’s team this weekend.

The final U78kg opposed today’s most impressive judoka, the experienced 28-year old Geraldine Mentouopou from France and 17-year young Julie Hoelterhoff. After 49 seconds Mentoupou launched a successful ippon and took the gold, nonetheless a great silver experience for Hoelterhoff. Mentoupou continues with her performances but also to be prepared well for the French Championships in November this year. Hoelterhoff was impressed by the power of the French in the beginning and couldn’t get into the match, but was still satisfied.

The bronze medal was captured by French Marie Del Puppo who had one penalty less than Anna-Maria Wagner (GER). The second bronze bout was decided in golden score by Katrien Johnson of Belgium who defeated Tamara Kraljic (SLO).

The final for men U100 showed great judo. Italian Domenico di Guida defeated three tough opponents in Ariano Rebouka Nell Honore (FRA), Max Hageneder (AUT) and Walter Facente (ITA). The names say enough about the strength in this class. Di Guida’s opponent in the final was Vincent Massimino (29). Di Guida is the man with the talent reputation and took the lead by yuko. Di Guida won the European Cadet title in 2008 and European Junior title in 2011. In 2014 he added the European title U23. He used this event in Belgrade as preparation for the Grand Slam in Paris. for this he needs these kind of matches. Massimino won the title last year U90kg in Belgrade but Di Guida simply didn’t give him a chance in this category after he scored yuko. The Italian took the first title for his country.

The bronze U100kg was for his team-mate Walter Facente of Italy, normally fighting U90kg at world level, but for this occasion one step higher. He was able to defeat Sjoerd Riddersma (NED) in his last match. Hungarian Gergo Fogasy defeated Swiss Patrik Moser for bronze.

In the women’s heavyweight class Ivana Sutalo won her three pool matches and took the gold. Silver was for Milica Zabic of Serbia and bronze for Mercedesz Szigetvari.

The men’s heavyweight title was for Daniel Natea, he didn’t have to fight the final against Alessio Mascetti of Italy. Natea defeated Serbian Nikola Jeremic in his first round and via Ivan Covic (CRO) and Vito Dragic (SLO) in the semi final he reached gold. Natea is ready to defend his Grand Slam title in Abu Dhabi and make a good result first at the Grand Slam of Paris.

Two Serbian athletes in the two bronze finals. Vito Dragic (SLO) won the match against Vladimir Gajic of Serbia due to a disqualification. Bendeguz Demeter (HUN) scored a yuko but was under pressure with three penalties against Serbian Nikola Jeremic. The home crowd supported got what they wanted, bread, games and a bronze medal after the fourth penalty 23 seconds for the end.

France won the medal table with four victories, followed by three countries with two titles. The strong female talents of Germany are ready for the World Junior Championships with 5 medals, the men added two more. Holland was the strongest team among the men with two titles. And Croatia won two gold medals by the women. Host Serbia cherishes five medals among the title for Marko Vukicevic.