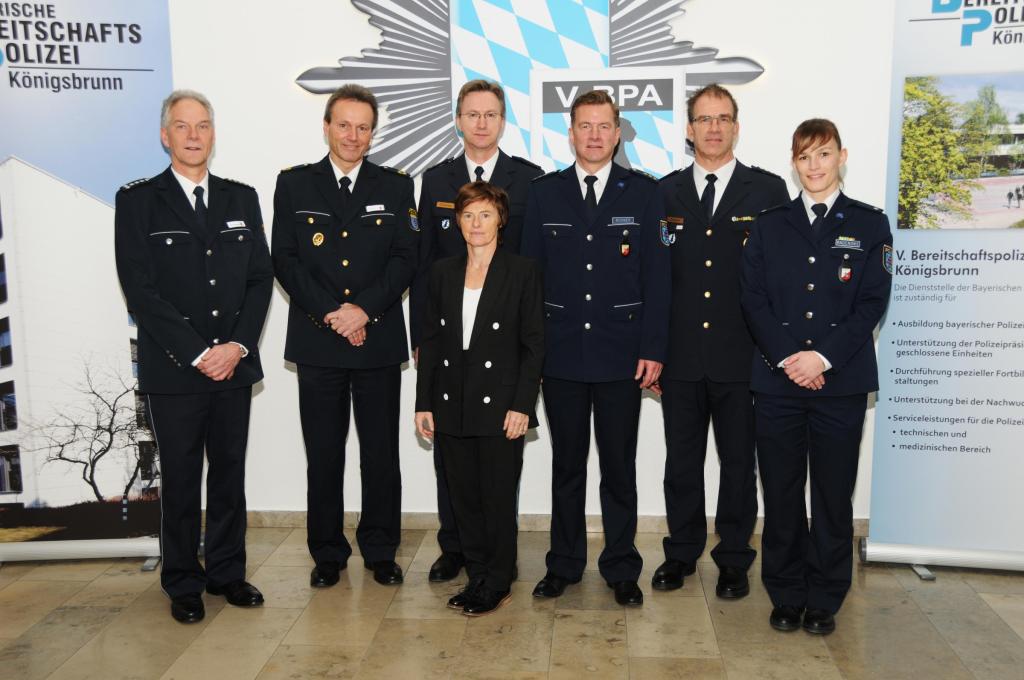 With the aim to develop and promote the EJU Military and Police Commission, the EJU Vice President responsible for Education Jane Bridge was invited by Johannes Daxbacher member of the EJU Police commission and head for German Police Judo, to visit the Police Academy in Königsbrunn Bavaria.

Firstly, there is the beautiful Police dojo in the academy which is also open to civilians. Within the dojo, police officers and the general public can train together most days and there is a vibrant, competitive group travelling with their coach Regina Monti-Daxbacher to national and international events. The club is governed by police officers which has established a genuine and lasting connection between themselves and the general public. Johannes Daxbacher founded Judo – Polizeisportverein Königsbrunn (Policesportsclub) 36 years ago, when he was just 19 years old.

Besides a visit to the dojo meetings were held all day and with representatives from European Police Sports Union (USPE), German Police Sports Federation (DPSK) and EJU. 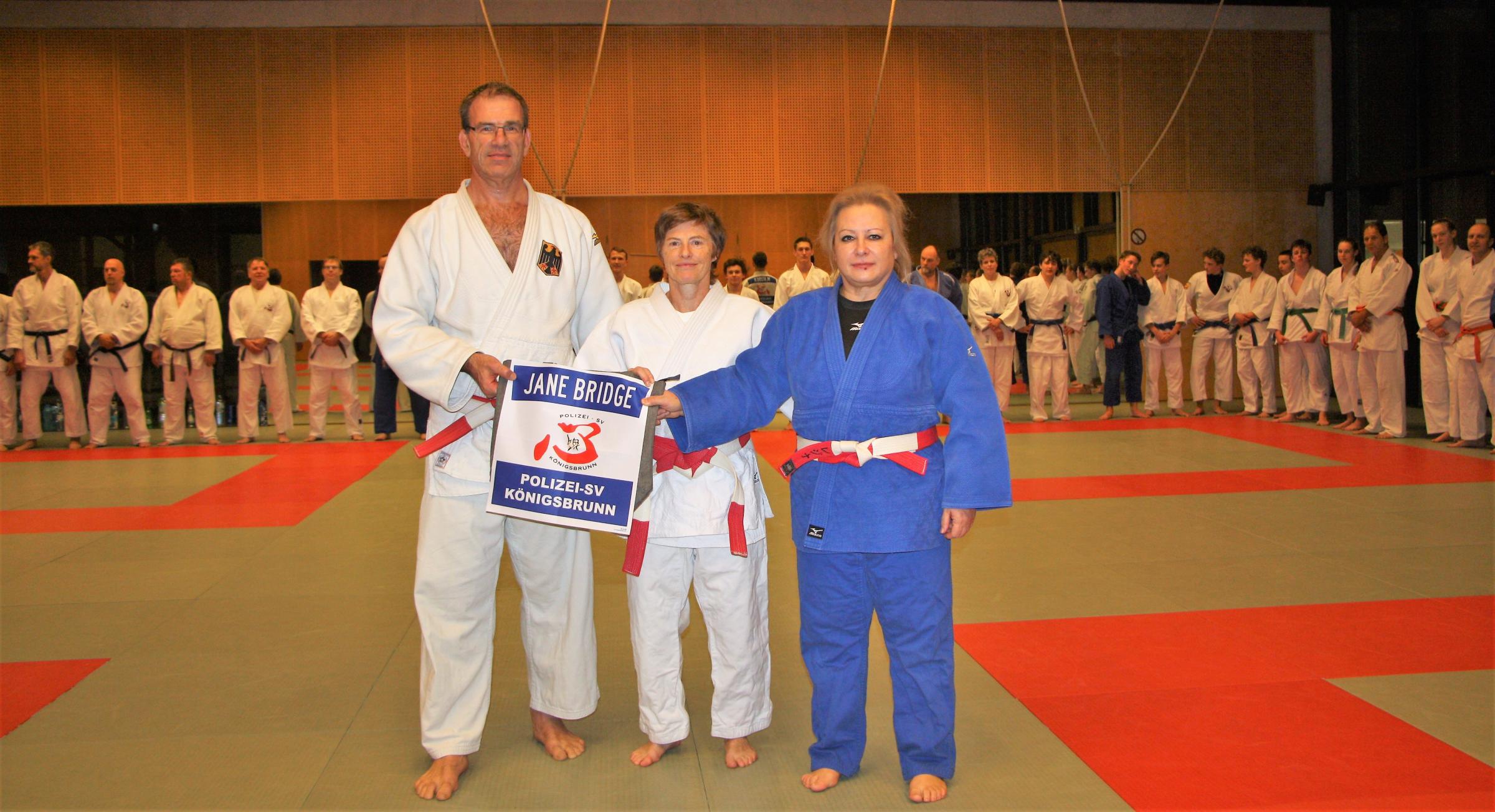 Jane Bridge has been presented with a backpatch when she visit the Police dojo in Königsbrunn.

“The link with the local people, especially children and youths and the police has many benefits for the community. When young people of today can have a healthy and confident relationship with the law, there is a long term benefit for all parties, and judo is an ideal tool to make this connection. Indeed members practicing in the judo club have gone on to become police officers.”

Another special part of the Bavarian police academy is the “double career” which it offers certain top athletes. 28 year-old, Sebastian Seidl, is not only a police officer, but is currently working his way to qualification for Tokyo 2020 Olympic Games. The 2018 Hague Grand Prix bronze medallist is one of the athletes selected to be on the programme. Seidl states,

“The programme enables me to manage both my career as a police officer and also to be in the best conditions to train and compete in judo with my aim to represent and win a medal at the Olympic Games, for my country and of course for the police.”


Ms Jane Bridge pointed out to all those attending, the advantages and benefits of bringing judo to all police academies and also the benefits of having judo athletes in the police force, encouraging all to push these programmes for police in Germany. Bridge went on to support this type of opportunity,

“Everybody understood the advantages and also the parallels between the values of judo and the values of the police. In May, the European Police championships will take place in Győr, Hungary, and this topic will be again on our agenda, this agreement, which is a good example for other countries to see the fruitful cooperation between two national bodies, and the possibility for a double career.”

A memorandum of understanding was signed in Düsseldorf during the German Grand Slam between the German Police Sports Federation (DPSK) and the German Judo Federation (DJB). Johannes Daxbacher explained,

“We will actively cooperate with the DJB in the field of sport and we will organise common judo events. Many athletes can have a double career, as a top judoka and as a police officer. We need to inform the public about the opportunity they have to join the police. We want to reinforce the respect and self esteem of everyone, but we also believe that people can join the police and then start judo.”


The benefit of this kind of cooperation was also mentioned by Markus Ferber, member of the European Parliament. He has sent a letter concerning the merge of the police and judo,

“The value of judo for the police is in the improvement of fitness in a holistic way which helps police officers to maintain the resilience needed for the high demands of their daily duty. A police officer, no matter where in the world, has to be fit – he is expected to be so.

Apart from its physical and athletic benefits, I consider judo a great technical gain for the police being more and more confronted with aggressive citizens and increasing violence. A well-executed judo technique can be a substitute for the use of a baton and firearms and can help to gain control over violent people. The citizens and our society, as well as your colleagues, profit from officers who are skilled in judo and are able to apply it competently and efficiently in case of emergency.

Yet, for me it is not only the techniques of judo, but also the values of judo, such as respect and mutual appreciation that are of great importance. Respectful behaviour creates confidence. Body language, whether expressing respect or disrespect, is internationally perceptible and does not stop at borders nor language barriers. A good deal of conflict management is part of a well-trained officer’s job – here, judo can contribute significantly in theory and practice. That is exactly what police officers need for their daily work in conflict resolution: A strong awareness of one’s own values, respect for one’s counterpart, not refraining from conflicts on the one hand and a good deal of calm conflict management willing to compromise on the other hand.”

Ms Bridge, on behalf of the European Judo Union would like to congratulate Mr Daxbacher and the Police Academy of Königsbrunn on their great work to bring judo and the police together for mutual benefit.