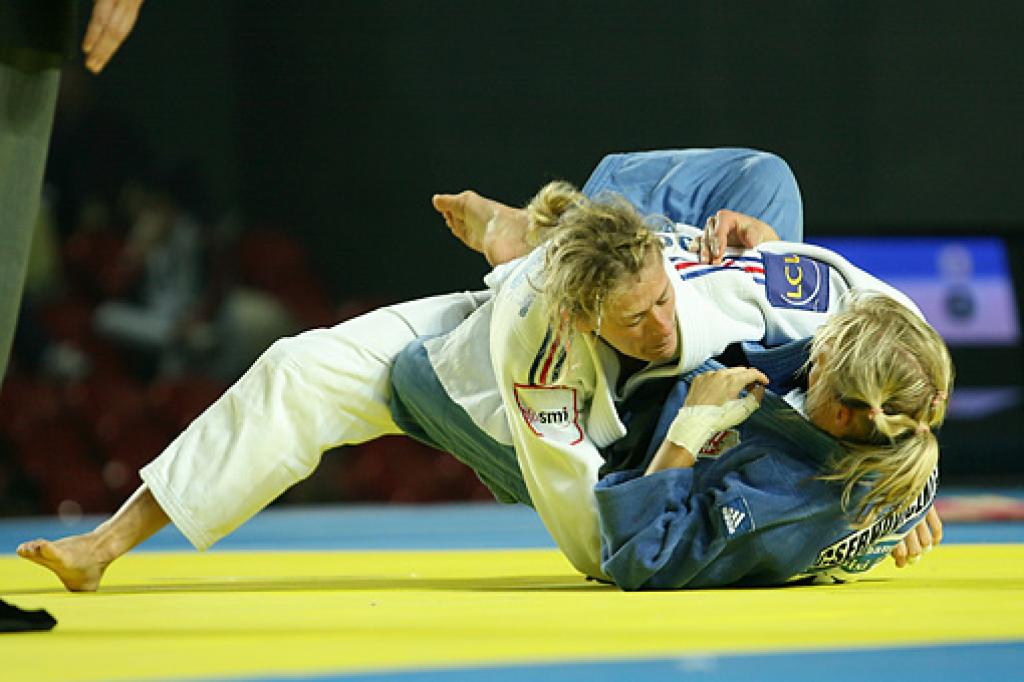 Six out of seven gold medals at the IJF Grand Slam in Rio de Janeiro were gained by European judokas after day one. In the three male weight categories Ludwig Paischer (AUT), Alim Gadanov (RUS) and Dirk van Tichelt won the gold.
In the women’s categories Frederique Jossinet (FRA), Telma Monteiro (POR) and Claudia Malzahn (GER) were able to win the title in the Maracanazinho Hall.

All male finals where a clash between continents. Paischer was again able to beat Hiroaka Hiroaki (JPN). Last year Paischer was too strong at the World Cup in Vienna. For Paischer it has been a long time since he won a title, besides becoming Austrian champion, it was in Lisbon at the European Championships last year when he finished on the highest stage. At the Olympic Games he lost the final and at the Grand Slam in Paris he finished third, just like in Tbilisi at the European Championships.
The victory helps Paischer to get a top seat at the World Championships as he is now ranked number one at the IJF World Ranking. The Austrian fighter about his win: “I’m happy to finally win a tournament again. Obviously our choice to build up our programme towards the world championships is working. But I can only confirm that if I’m at the highest stage again in August in Rotterdam.”
European Champion Arsen Galstyan (RUS) finished third.

Ali Gadanov is also in shape. He recently won the Tre Torri Tournament in Corridonia (ITA) and now beat strong Mongolian Tsagaanbaatar Khashbaatar in the final U66kg. At the Grand Slam in Paris this year Gadanov also beat Khashbaatar for a medal.

Belgian judoka Dirk van Tichelt became champion U73kg. He defeated Leandro Guilheiro from Brazil.
Van Tichelt seems to collect medals at IJF events as he finished second in Moscow in May, and at the IJF Grand Prixs in Hamburg and Tunis he won bronze twice. Also a good commercial choice of Van Tichelt, who earned 5000 US dollars for his win.
Guilheiro beat European U23 champion Mansur Isaev in the semi final. I revenge of Guilheiro’s loss at the IJF Grand Slam in Moscow where.

Frederique Jossinet states once more that she is a major candidate to win the World title in Rotterdam. In the final she beat Emi Yamagishi who was too strong for Jossinet in the final of the Grand Slam in Paris this year.
Audrey La Rizza couldn’t hold Yuka Nishida in the final U52kg and lost with a waza-ari. La Rizza won silver, just like in Paris.

Telma Monteiro, who else, won the tournament in Rio by beating Nae Udaka from Japan with ippon. Udaka who had won the Grand Prix in Tunis was now surprised by the strong Portuguese fighter who may be happy win her bronze medal at the Grand Slam of Moscow, otherwise she doesn’t know the feeling of losing. That feeling is a necessity to be sharp as a raiser in Rotterdam.

The U63kg weight class was an all European final. Claudia Malzahn (GER) is back again and won in Rio. Malzahn beat Anicka van Emden (NED) after just one minute and seems to be on her way back after winning the German title and the Swiss Open this year. Annicka van Emden can be satisfied with this great performance and has made the connection to the European top, although she faces the main competition in her own country by means of Elisabeth Willeboordse who will represent her country at the worlds. A luxury problem indeed, but Van Emden gets better every time and so is Malzahn.

Gevrise Emane (FRA) won her first international medal U63kg after changing from the U70 where Lucie Decosse is one of the favourites to take over the world title Emane won in Rio in 2007. However the real competition for the World Championships will fly in from Japan.