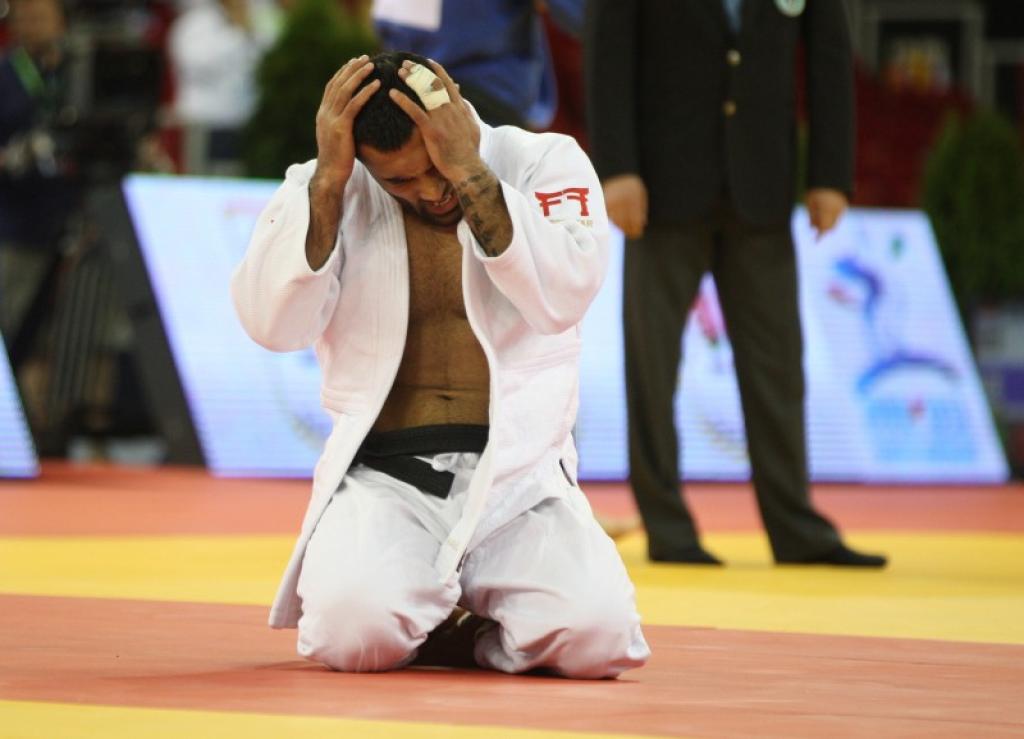 The biggest upset in the morning session at the 2013 adidas European Judo Championships in Budapest on Saturday was undoubtedly Ilias Iliadis’ unexpected loss to Estonian Aleksander Marmeljuk in the round of 16. Other favorites in the weight categories -78kg, +78kg, -90kg, -100kg and +100kg made it to the semifinals.

In the women’s -78kg, World Champion and 2012 European silver medalist Audrey Tcheumeo of France beat Viktoria Turks of the Ukraine to advance to the semifinal. She will have to deal with reigning European bronze medalist  Ana Velensek (Slovenia), who sent Luise Malzahn (Germany) to the repechage. Reigning European Champion Abigel Joo of Hungary had to fend off a challenge by Marhinde Verkerk and won by shido. In the semifinal, she will take on Lucie Louette of France.

The semifinal in the women’s heavyweight features the favorites. Emilie Andeol of France will face Iryna Kindzerska from the Ukraine. Turkey’s Belkis Zehra Kaya, the bronze medalist in 2012, will fight 2012 European silver medalist Lucija Polavder from Slovenia. 2012 European Champion Elena Ivashenko of Russia is not competing this year.

Competition was really tough in the men’s -90kg in the preliminaries. World Champion Ilias Iliadis of Greece lost to little heralded Aleksander Marmeljuk of Estonia, whom he met for the first time in competition. Marmeljuk then succumbed to German Marc Odenthal, who showed strong performances from his first match on. Odenthal now has to deal with Kirill Denisov of Russia in the semis. Top-seed and defending European Champion Varlam Liparteliani of Georgia was close to defeat against Guillaume Elmont (Netherlands) in the round of 16. He needed to go into Golden Score to defeat the Dutch and also needed the full five minutes to beat Karolis Bauza (Lithuania) in the quarterfinal. Now his next opponent is Kirill Voprosov of Russia in the semifinal.

World No. one Lukas Krpalek of the Czech Republic advanced confidently to the semifinal in the men’s -100kg. There, he has to expect a challenge from 2012 European bronze medalist  Elmar Gasimov of Azerbaijan. Gasimov is the only 2012 European medalist competing in the event this year. 2012 Olympic bronze medalist Henk Grol from the Netherlands was the favorite from pool C and proceeded to the semifinal with strong performances despite a broken thumb. His opponent will be Cyrille Maret of France.

World and Olympic Champion Teddy Riner of France dominated in the +100kg as expected so far. He first beat Grim Vuijsters from the Netherland before defeating Germany’s Robert Zimmermann quickly by ippon. Riner is now up against Russia’s Renat Saidov in the semis. Saidov relegated 2012 European silver medalist Barna Bor of Hungary to the repechage. The Hungarian judoka still has a chance to fight for the bronze medal. Adam Okruashvili of Georgia advanced to the semifinal from pool C. His next opponent is Matjaz Ceraj of Slovenia who disposed of 2012 European bronze medalist Marius Paskevicius (Lithuania) in the quarterfinal. 2012 European bronze medalist Janusz Wojnarowicz of Poland was eliminated by Zimmermann in round two.