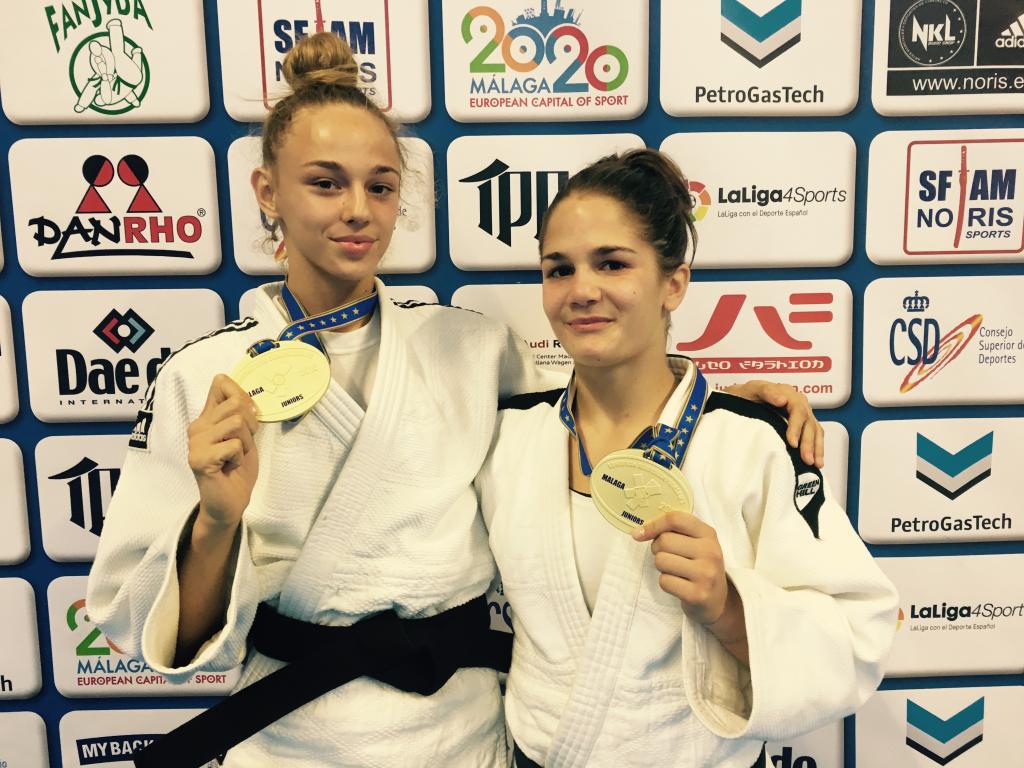 Daria BILODID (UKR) strode through the -48kg category in style. On her way to her golden triumph she knocked out first Elena HIDALGO LEDO (ESP) followed by Gulkader SENTURK (TUR). Next up was the semi-final against top seed, 2015 Junior European Champion, PUPP Reka (HUN). The 15-year old judoka [Bilodid] offered little opportunity for the Hungarian judoka and won comfortably. Bilodid, who also won the Cadet World Championships last year, had one job left for the day, and that was to take down second seed Daria PICHKALEVA (RUS). The Ukrainian starlet left no stone unturned in scoring two yuko against the Russian before finishing off in style with a breath-taking transition into juji-gatame. 2016 Cadet and Junior European Champion, Bilodid, expressed her feelings after the final: “It was my dream. I really wanted to win this championship. I know that the girls here are stronger than at the Cadets and some of them are 4 years older than me but I am also strong and I knew that I can do it. I am very happy more than I was in Vantaa (2016 Cadet European Championships). I had fantastic preparation and my parents, who are also my coaches, believed in me. I don’t have a secret for success. I train very hard and I believe in my power. Next year I want to go to both World Championships and I hope I can win also those titles.” The success runs in the genetics as Bilodid’s father, Gennady BILODID (World bronze medalist 2005 Cairo)also happened to be a very successful former judoka.“She loves Judo more than anything else and that is the reason she trains and works very hard”, said Mr Bilodid.

Another shining star took her place in the history books when Nadezda PETROVIC (SRB) won the -52kg category. Her day began by defeating Mzia BEBOSHVILI (GEO). Next came one of the toughest fights for Petrovic when in the second round she narrowly [by 2 penalties] defeated Myriam BLAVIER (BEL). The quarter-final brought about a match-up against second seed, Mariana ESTEVES (POR) who was taken out by the Serbian by ippon. The semi-final was the contest that  Petrovic herself recalls as being the hardest contest of all, against Anja STANGAR (SLO). Meanwhile, in the top half of draw, a domino effect hit the top seeds as they were taken out one by one. It was Irem KORKMAZ (TUR) who caused all the clutter in the top half of the draw. This resulted in a Petrovic vs Korkmaz meeting in the final where in the end, a single yuko difference allowed the Serbian judo queen to claim the 2016 Junior European title. Petrovic concluded with her thoughts at the end of the day: “Actually I thought it is impossible for me to win a medal today. The gold medal is a little surprise for me. I had a good draw. In all honesty only the semi-final was tough against Anja STANGAR. After this victory everything was much more easy and I felt this big opportunity to get gold and I did it… My secret? I can’t give up but maybe my skills in ne-waza. I won 3 of 4 fights in the ground.”