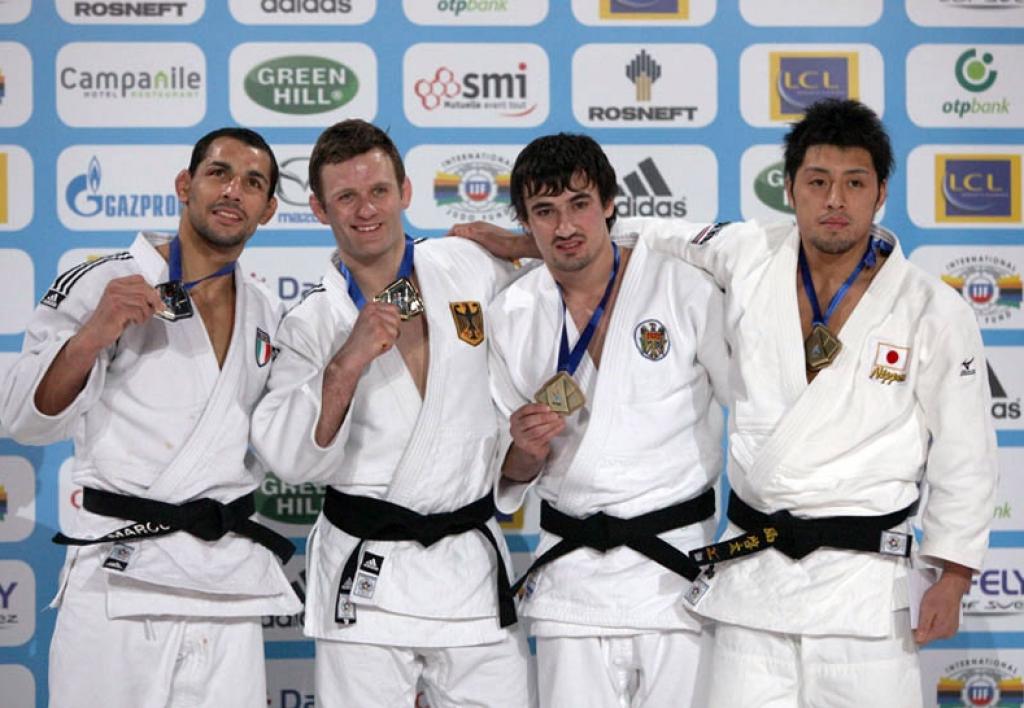 Not many highlights for Europe this edition of the Grand Slam in Paris where as usual Japan dominates the medal tally. An expected highlight was the gold for heavyweight Teddy Riner and Ole Bischof (GER) was able to win his first ever Grand Slam in his career, aged 32.

Bischof won his five fights against strong competitors. The semi final against World Medallist Sergiu Toma (MDA) by osae-komi. The final against Italian Antonio Ciano was won by penalties. Ciano won his first ever medal in Paris and first ever Grand Slam medal.
Without Kim Jae-Bum this category is open for everyone.
The same counts for the category +100kg, but Riner doesn’t give anyone a chance. Today he also dominated his category and collected his 9th World Tour win, his fifth in Paris, an all time male record. He has never competed at other Grand Slams, the only reason why other get the chance to win something.
In today’s final strong Brazilian Rafael Silva was outclassed in one minute. It’s the most obvious and expected future Olympic Champion, and that’s exactly Riner’s danger.
Abdullo Tangriev gave Riner a good match in the semi final and hold pressure for three minutes, but did lose by ippon afterall.

More surprising was the loss of Lucie Decosse U70kg. Haruka Tachimoto (JPN) won the gold. The Japanese could block out all attacks by Decosse. After the 8 minutes without a score the referees decided in the favour of Tachimoto who was a bit more active. Two other Asians won bronze: Hwang Ye-Sul (KOR) and to Yoriko Kunihara (JPN).
Uzbek Dilshod Choriev won gold U90kg against Ukrainian Roman Gontchuk by ippon with a beautiful o-goshi. Russian Kirill Denisov won bronze.

U100kg Jevgenijs Borodavko of Latvia could not prevent Olympic Champion Naidan to win the gold in Paris. In the Olympic year 2008 he lost the final, now he is in a luxury position.
Borodavko had a great day defeating the world’s number one Henk Grol (NED). Last year Grol defeated Borodavko in the semi final in Paris. In the semi final the Latvian defeated another Mongolian Battulga.

In the women’s category U78kg the results was a little surprising but still great names in the final. Not World Champion Tcheumeo but Mayra Aguiar (BRA) was the winner after defeating the world champion in the semi final. In the final Aguiar beat former World Champ Kayla Harrison (USA). Let’s not forget Ruika Sato (JPN) and Luise Malzahn (GER) to complete a fantastic day and deserved gold medal.

Megumi Tachimoto (JPN) won gold in the women’s heavyweight division. In the final she defeated strong Russian Elena Ivaschenko in a tactical fight by decision. Anne-Sophie Mondiere could cheer up the crowd taking bronze.

Europe collected 22 medals and four gold, last year 30 and six gold. A lot of work to do. Next mission in Europe: The World Cups in Oberwart (AUT) and Budapest (HUN) next week.

Review the Grand Slam in pictures: