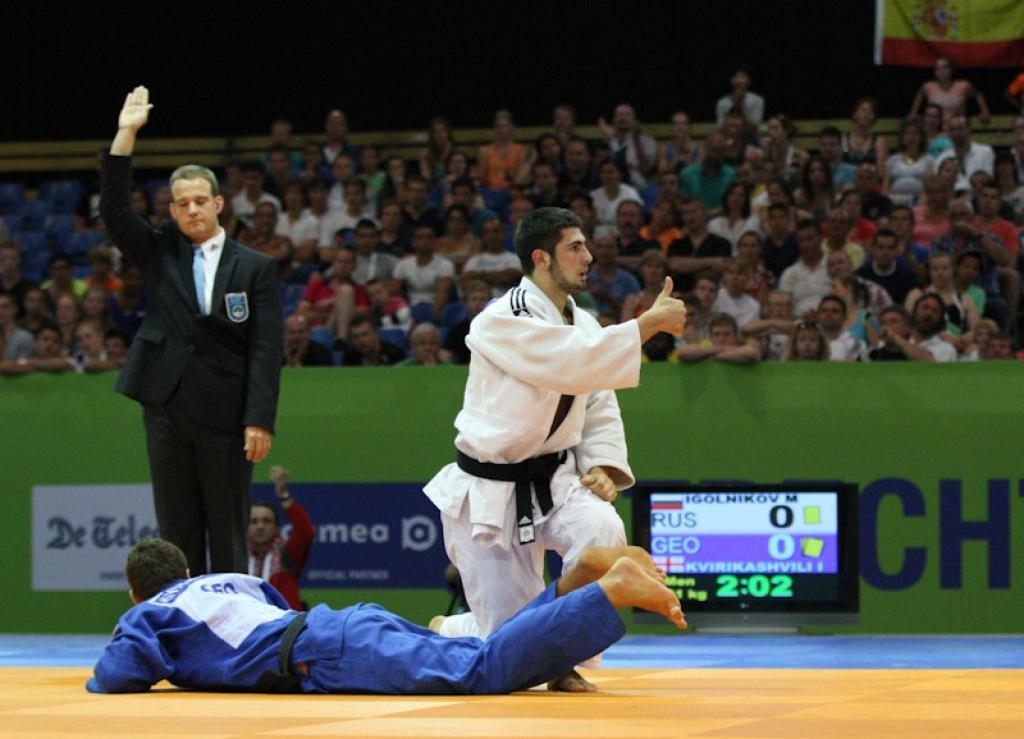 A great day again for judo miss spectacular and competitive judo at the European Youth Olympic Festival Utrecht. What an exciting final in the women’s U63kg. The two favourites qualified for the final bout and it was a reversed repetition of the Cadet European Championships final of three weeks ago. Szabina Gercsak (HUN) and Lisa Mullenberg (NED) qualified for the final.

Now in the home nation of Lisa Mullenberg both rivals didn’t show their best judo as they know eachother so well. Gerszak is the more successful judoka and already won a Junior European Cup this season and was the youngest participant at the European Senior Championships.

After three minutes of fighting it was Mullenberg who made the first attempt for  serious score but didn’t get an award. However it resulted in a penalty for the Hungarian who had to show more of the Belgium referee, a decisive decision for the match. Now it was Gercsak who needed to make the match but she couldn’t as Mullenberg smelled the victory and Gercsak couldn’t come back. Mullenberg claimed the third gold medal for The Netherlands and Gercsak knew she should have started more convincingly. All tears of Tallinn were wiped away by Mullenberg, now she tasted the sweet of gold.

Gercsak was deeply disappointed, but maybe it will help her when in August the World Championships will take place in Miami, which the qualifying moment for the Youth Olympic Games in Nanjing in 2014.

Buga Kovac (CRO) won a bronze medal in this very competitive field, however she didn’t come to a score in the whole tournament and won by tactical judo.

Israelian Liebel Paz lost her match against British Piovesana but defeated Tea Tintor of Serbia. For bronze she won her third match of the day against Sabina Merklova (CZE).

What a spectacular judo in the men’s U73kg with a surprising winner in Islam Abanoz from Turkey who won Turkey’s first gold medal, a subjective hope that the youth is warming up for the bid for the 2020 Olympic Games of Istanbul. Abanoz showed with offensive judo that he was the well deserved winner of the gold medal among these talents. In this competitive category the winner also defeated flagbearer and favourite Nemanja Majdov in the second round. In the final he defeated Tamazi Kirakozashvili of Georgia with a textbook footsweep grabbing the first ever male gold for his country in EYOF judo history. Kirakozashvili defeated Arso Milic (MNT) both bronze medallists at the European Championships in Tallinn. The Georgian now won silver, Milic won the bronze after a victory against French Tony Pershals. Oskar Tvauri of Finland collected the first Finnish EYOF medal since 2001 after defeating Marek Svestka (CZE).

Another strong category is the women’s U70kgs at this spectacular judo day. The finallists were kind of expected. Brigita Matic of Croatia and Germany’s Giovanna Scoccimarro. Certainly the Croatian lady who won a bronze medal at the Europeans and could not successfully defend her 2012 title, but everyone knew she was the one to be defeated. Scoccimarro though didn’t let go her ambitions to make this her highlight of the season and gave Matic a hard time. Matic took more risk and even more when she received a penalty for impassivity in the last minute. This gave more energy for Scoccimarro who wanted to keep the dangerous Matic on the ground and Scoccimarro claimed the victory. The last lady won who won an EYOF medal in this category for Germany was Luise Malzahn, now world top U78kg.

Another setback for Matic who had to be satisfied with silver, but perhaps she can take advantage of her loss soon in Miami’s Worlds.

Bronze was for Belgian Sophie Berger who was satisfied with a good medal. European finallists Aleksandra Samardzic of Slovenia won a bronze medal after her victory over Sarah Hill (GBR). Coming out of the U63kg category she remains to be developing in her new weight class.

The gold in the category U81kg was already reserved for Mikhail Igolnikov. He is the triple consecutive European Cadet Champion and current World Cadet Champion. The magician from Russia defeated the strong Ieso Kvirikashvili of Georgia in the final. The best of the rest against the skilled Russian. But also Kvirikashvili was able to stand out and defeated Frank de Wit in the semi final and Max Schneider (AUT) in the quarter final.

Igolnikov fought a tactical match against the Georgian who tried everything to defeat Igonikov. He just had to wait for his chance which came after two minutes when he benefit of the gap left by Kvirikashvili. Simply the best.

Max Schneider finally gave Austria their expected medal. The Austrian talent confirmed his medal at the European Championships in this age category and won again bronze after he defeated Idan Vardi (ISR), who came just too short for a medal.

The second bronze was for Frank de Wit, Europe’s finalist of three weeks ago. He was able to overcome Gregor Kocmut (SLO) in his last match.

The Netherlands gained another gold medal and is still leading with three first female gold medals. Georgia and Russia now collected two gold medals, both in the men’s division.

Watch all photos in our photo gallery with breathtaking moments.