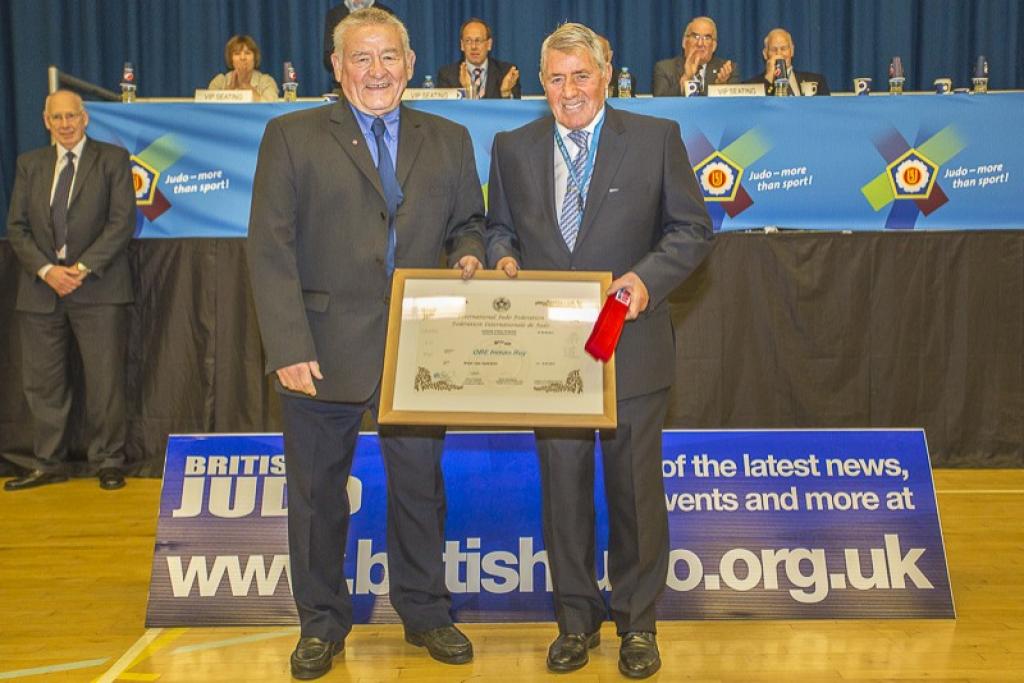 British Judo history was made today when Roy Inman OBE and Colin McIver were both awarded their 9th Dan at the London British Open at K2 in Crawley.

The 9th Dan, awarded by the International Judo Federation, is a highly prestigious grade only a single grade below the maximum 10th Dan.

The presentations were made by George Kerr, President of the British Judo Association (BJA) and 10th Dan, during the second day of competition at the EJU European Cup event.

Roy Inman OBE is a British Judo Board Director and was the BJA National Coach for over 15 years, coaching at four Olympic Games. His players won six Olympic Medals and 14 World Championship titles.

He was awarded the UK International Coach of the Year in 1991 and an OBE for services to sport from Her Majesty the Queen in 1992.

During a 12 year playing career Inman won two British Open titles and competed in both European and World Championships.

After receiving the award Inman commented: “This is a fantastic honour and I was very surprised to receive it.

“It’s great to be appreciated and I feel really honoured that it was presented by George (Kerr) and I’m also pleased for Colin receiving his too.”

Colin McIver is Technical Director of the British Judo Association and a former British Judo Performance Director between2004-2007. He also formerly held the role of Chief Executive of Scottish Judo.

McIver’s career as an athlete started in 1963. As an ex-GB international, he won the British Open in 1966 before representing GB at the World Championships in Salt Lake City 1967 and was reserve for the Moscow Olympics.

Reflecting on the honour, Colin said: “I’m surprised and delighted to have been awarded such a high honour by IJF.

“I’m now going to try and live up to it and hope to continue to contribute to development of the sport for many years yet.”

British Judo President George Kerr added: “I speak for the whole association when I say how proud we are of Roy and Colin’s achievement.

“Having known and worked so closely with them for many years I’m delighted for them both.”