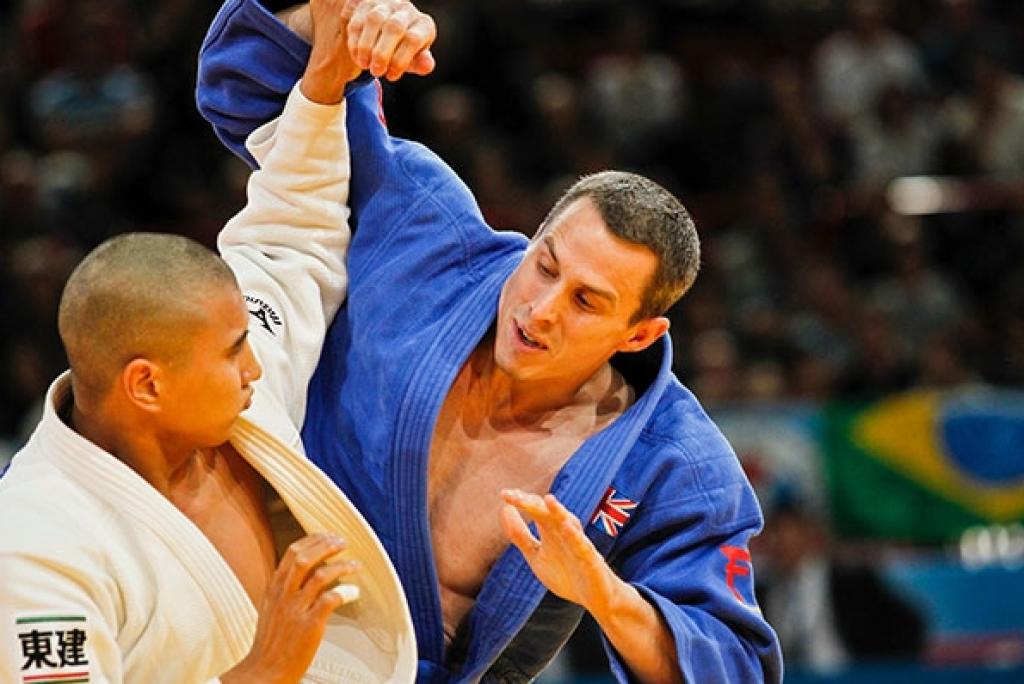 Olympic host nation Great Britain is counting on fervent home support to inspire them to London 2012 success on the tatami.
On the 26 June the British Olympic Association (BOA), who have declared Team GB as 65 million strong – the population of Great Britain – announced British Judo’s 14-strong squad which boasts a mix of Olympians, maturing judoka at the peak of their powers and fearless young athletes who will grace the greatest show on earth for the first time.
The BOA granted British Judo a full home quota of 14 places – as part of a 542-strong Team GB roster of athletes – which will see them boast a full complement in London alongside Brazil, France, Japan and South Korea who all directly qualified seven men and seven women.

British Judo’s squad is led by two-time world medallist Euan Burton, the first non-Asian the win the Tokyo Grand Slam, and three-time Olympian Karina Bryant, both survivors from Beijing 2008. The host nation naturally has a tradition of producing unexpected results and at least matching their medal target. Judo is no exception. In Beijing 2008 hosts China claimed four medals including three gold to finish second in the medal table. At Athens 2004 the home nation took gold as Ilias Illiadis topped the medal rostrum at the tender age of 17.

Four years earlier at Sydney 2000 the hosts claimed a bronze medal as Australian hope Maria Pekli achieved the greatest result of her career. Such as tradition is encouraging for the British team as they hope to erase the memories of Athens and Beijing where they come away without a medal.

British Judo’s last Olympic medallist is Kate Howey MBE who took silver in Sydney and was bestowed with the great honour of carrying the British flag at the opening ceremony four years later in Athens. Howey, 39, now British Judo’s lead Olympic women’s coach, described her experience of home quota allocations and how the British Judo’s Olympic cycle has unfolded. “My experience of host nation quota is probably the same as anyone else as it is quite a new addition as it only came in to the games at Atlanta 1996 so obviously USA, Australia, Greece and China have benefited from this although I believe Greece still didn’t have a full team in 2004,” said the five-time senior world medallist. “I think if the team had to qualify through the world ranking system then we would not have 14 players going to the Olympic Games but the whole High Performance programme would have been different from 2009 onwards because we’d have been chasing points to qualify.

“London 2012 is a fantastic opportunity for all of the players selected and and anything can happen on the day. I think by having 14 players representing us in London it could help the profile of the sport but ultimately the only way to do this is by getting medals. Team GB itself is bigger than it’s ever been, so to increase the profile you have to stand out.” British Judo’s interim Performance Director Daniel Lascau believes a home quota selection has positives and negatives. “The advantage is that you don’t need to qualify and can focus on the competition schedule but a disadvantage is that without the pressure you can run out of a programme,” said the 1991 world champion. “You still need strong results to achieve a top eight world ranking place and be seeded at the Games which is something Euan Burton and Karina Bryant were close to. “We will have 14 athletes who will represent their clubs, country, British Judo and our membership. We start on the 28 July and will approach it as our job making sure we’ve done everything possible to perform to our best and then respect the other sports as part of the fantastic Team GB. “Our goal is one medal and to aim for two top 8 places from the 14-strong team and Euan and Karina are two players with such ability.”

Lascau, who took over the British Judo High Performance Directorate reigns in October, added: “The Olympics will be a very unique experience to have 14 judoka represent Team GB, it’s a huge experience not only for the players but for all the volunteers, ex-athletes, staff and the British fans. “Home advantage is a factor, in Sydney we saw Australia win a medal and China did very well in Beijing. The crowd will be behind us every time a GB judoka steps onto the mat as every judoka has an amazing experience. We must be proud of them and give them all the support we can.”

The excitement of a home Olympics, Britain’s first since 1948, is gripping the nation and the judoka themselves are marking off the days in their diaries as they prepare for the once in a lifetime opportunity at the London ExCel. 2012 IJF World Masters bronze medallist Euan Burton said: “Being selected to Team GB for the London 2012 Olympic Games is a fantastic honour. As a judoka it is the chance to make British sporting history and become our first judo Olympic champion. To have that opportunity on home soil is even more exciting and I am aiming at achieving just that in London on the 31 July.”   Team GB Chef de Mission Andy Hunt said: “It is very pleasing to announce a full complement of 14 judoka to compete for Team GB at London 2012.   ”Great Britain has a proud tradition in the sport of judo, having claimed a fantastic tally of 16 Olympic medals since the sport’s introduction at the 1964 Games. A number of the talented athletes selected have produced some outstanding medal winning performances in international competition since the last Olympic Games, and this should fill them with confidence that they can seize this once in a lifetime opportunity with both hands and challenge for the Olympic podium in London.”