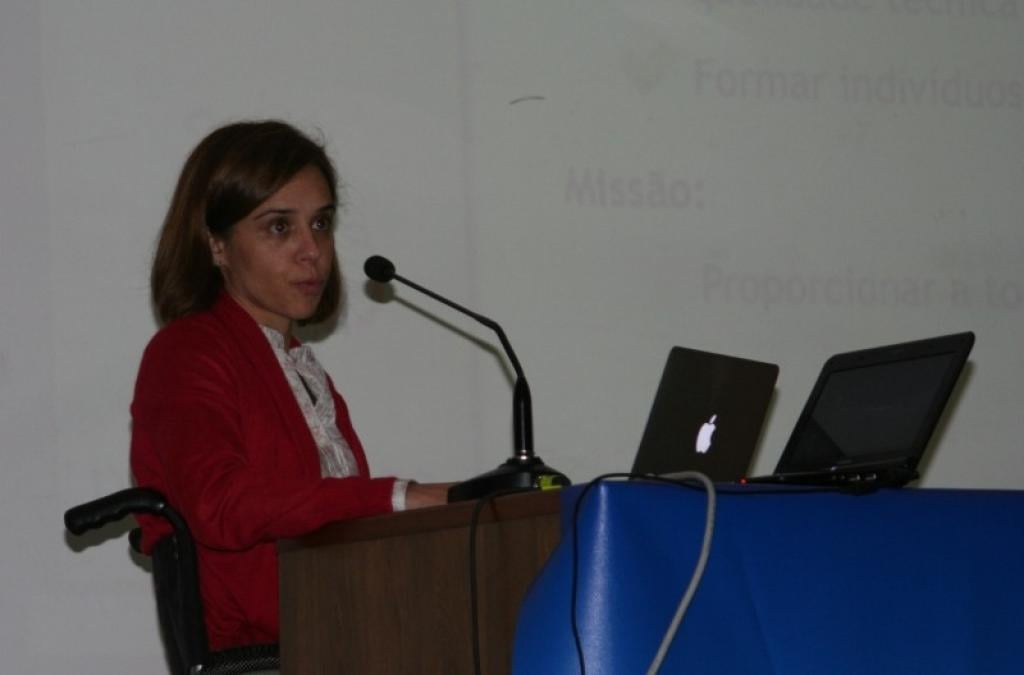 Ines de Almeida is head of the social responsibility Sector in Escolas the Judo of Nuno Delgado.

“Our goals were connected to rain people with character.

The school had one mission: To allow everyone with no exception  to practice judo. In time we assessed what we were doing and to see that the goals were met. We were training people and there was a good performance. But the mission was not fulfilled. Everyone should be everyone, but that didn’t happen so far. So we had to think what we could do to close that gap.”

When we realized that not everyone was able to do judo, we realized that there were specific people and areas couldn’t do judo, so we created the social awareness and responsibility department. It was created in 2008 with the main goal was to take children with social and economic problems and help them with social inclusion through judo. This was the gap we missed and we tried to overcome this barrier. This was clearly the widest ranged problem. We started the program training champions for life. After meeting our goals we completed our mission and everyone would be able to practice judo in a fully inclusive way.

We needed to think how to implement and structure the project. With the judo blocks. It takes three months and is absolutely free, no money for anything. We start with three basic schools. During tour first presentation we invited everyone in school and learn what we want to do with the kids and our goals for them. We signed an agreement for the Nuno Delgado school and the school.

The rules have to do with attendance, maintenance of the equipment and parental involvement also becausewe talk about very young children. They can dream anything, for instance to become a champion. When they say this, we want them to be champions for life.

We try to convey this idea. All children want to be a champion and they know their heros, their idols like Cristiano Ronaldo, but they have very low self esteem. Many of them say straight away they won’t make it, and that is our goal, to convince them to overcome those difficulties. We work with them each week with two judo blocks. The involvement of family is essential. We want involvement. After one of two weeks we want the parents to take part to get the whole family on the tatami to move closer.

Almeida:  “The we could leave the school and go on, but there was such huge investment after three months. We changed some behavior, we allow them to dream, now what? “ We bring them to the next stage, the hajime centres. There we have two types of children. From the judo blocks and those who are in contact with them and are curious. They want to learn more. Also children from 6-14 years, a bigger area. Again we give sports training and they can take part in other budo activities such as camps. Not just in Lisbon but also other cities and in the camp in the Algarve. The centres work on a yearly basis and the children can go to these centres. For some participation is free or the monthly payments are very low, because we cannot help all children for free, so we need to select them. After the judo block ends, the sports are analysed and how they behave and their financial capacity to contribute. This is done by the teacher.

We try them to show of what they have learned to the community. So we grow from a small part of people to a wider community. They become well known in the neighborhood.

Ofcourse we don’t stop at the age of 14, so when they’ve reached that we go into the last stage.

At perfection centres we work with young people from 15-18 years at secondary schools.

Not everybody reaches this. They will need to trade and to pay their debt in the society. They can develop something professionally. They are invited in the training sessions of the Nuno Delgado Judo School. The cycles are annual and free for selected youth.

They are not champions or judoka for life, but citizens for life. Many turned 18 and now they teach judo in the blocks and back to the roots. Collect, achieve and give back

At the last day of the Social Inclusion Seminar in Lisbon a debate was held with other sports federations such as the Syndicate for Professional Footballers, the Portuguese Rugby Federation and the Portuguese Federation of Sports for Disabled People. There was a discussion led by TV moderator Marcus Albuquerque.

General Secretary of the Portuguese Judo Federation Jose Manuel Costa Oliveira summarized the good efforts made this weekend. He thanked the participants, the speakers and the European Judo Union.

“The big winner was judo this weekend. We’ve been at the dojo had the time to look at judo and talk. From now on judo will be developed and not be isolated. We have the federation for handicapped people and the Paralympic committee who will help to integrate to projects. We have the support and feel more integrated due to this support.

We are not along anymore. Everyone can practice judo and become a black belt and teach judo. I am greatful that we felt this warmth around us from the EJU, our great demonstration yesterday where we saw so much happiness.”

Mr. Jose Manuel Costa Oliveira thanked EJU Vice president Franco Capelletti and the present bodies. Also he thanked Councilor Manuel Brito of the city of Lisbon who is so involved in the projects and has a close relation to Nuno Delgado.

Manuel Brito who is a candidate to become NOC President next year said: “Not many champions are play the role as a hero, but Nuno Delgado can. Nuno has given many support to social inclusion. To build an inclusive society is not easy. At the Olympic Games we saw a female athlete from Saudi Arabia, then you understand that only the strength of the Olympic rings can do things what United Nations and other projects didn’t succeed so far. Inclusion is core of my policy of my work as councilor. We have a long way to go, and fight and successes will still be mixed. Music and Sports are our main tools. We have discovered in the most unthinkable places. I did judo and in judo there are clear rules. In many families the rules are not provided anymore. Judo is a useful tool to teach rules and values: respect, helping others. We have been successful in changing behavior and integrate youngsters. From our projects we even have some national champions! We have hundreds of kids in these difficult boroughs. Also in Swimming we have been successful, so sports is powerful universal language.”

EJU VP Franco Capelletti said: “If we give the good example for the children it will be good for our future. I speak a lot with Nuno Delgado and he knows I push a lot the children. For me it was a great success to have this seminar and see the children yesterday in the demonstration and to listen to the voice of the people.”