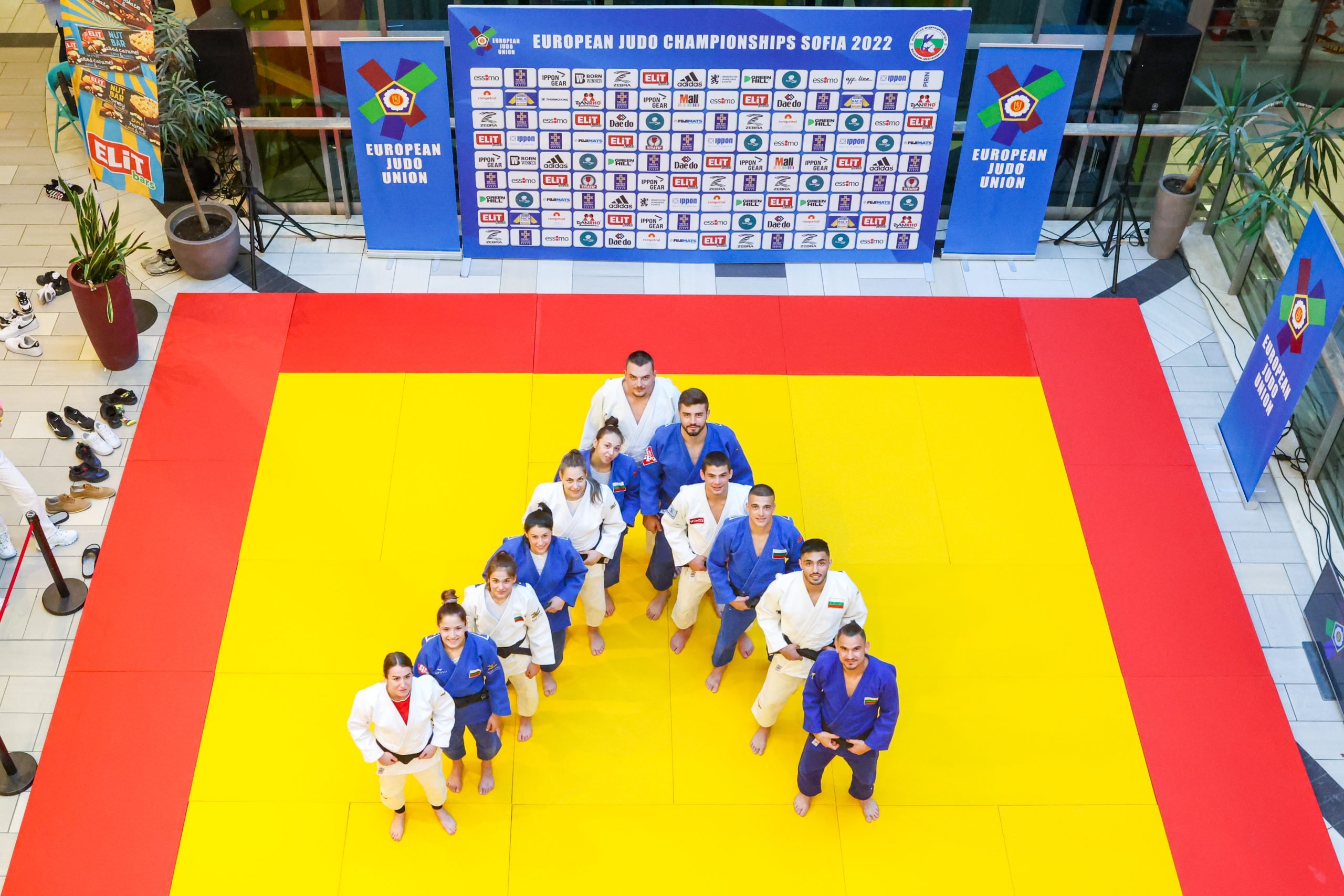 There are many excited children from various judo clubs in Sofia, shoppers intrigued by the tatami in the middle of the mall with media and journalists surrounding with cameras. An announcer steps to the middle and begins to explain to those moving up and down the numerous escalators, hanging over the balconies, that in two weeks, the Bulgarian Judo Federation will be hosting the prime event of the EJU, the European Judo Championships 2022.

Welcome to our guests on behalf of the Bulgarian Judo Federation, it is an honour that you are here with us. It is a pleasure to be host of the European Judo Championships which will start on the 29th of April in the Arena Armeec where we will meet the best judo players in Europe. I would like to send my best regards to the Bulgarian judo players, I wish you the very best and to have medal success. I hope that the public will enjoy the event and see the beauty of our sport.

The host continued to introduce the athletes, and to the crowds delights, they began descending the escalators to reach the tatami. All around the mall, interest was peaked and attracted many of the public to become spectators.

Ivaylo IVANOV, two-time European vice champion in the -81kg category has moved up a weight and was present however he did not demonstrate his judo abilities but instead explained to the crowds the actions on the tatami, the values of the sport. Assisted by the event host they made they event interactive and proceeded to interview the judoka after each demonstration.

First up were Mark HRISTOV (-73kg) and Bozhidar TEMELKOV (-66kg). Following their bout, Hristov was keen to request the public’s support in their upcoming contests and that they of course have high expectations for themselves and will endeavour to meet those of their supporters as well.

When asked how long he had been involved in judo and how is it different to other sports, two-time Olympian and two-time European silver medallist, Yanislav GERCHEV (-60kg) simply answered,

I have been a professional judoka since 2005, training two to three times a day. The difference between judo and other sports, there is so much to concentrate on, the discipline, learning how to respect one another, your opponents. It is a great sport for young people to do, as they grow they learn important values. It is a way of living for me, judo is everything.

Among the women’s team there was a familiar face, but one who previously competed for France.  Amelie GUIHUR previously fought in the -57kg category and has not competed on the IJF or EJU circuit since 2018.However now she is a conditioned -48kg and is ready to compete for Bulgaria and is a member of the Judo Lokomotiv Sofia club. Addressing the crowds in their native language she told them,

I am speaking a little Bulgarian and I love it here very much. I am feeling great and I look forward to feeling the judo in the Arena Armeec on the 29th of April.

Rounding up the event were the heavyweight men, Ivaylo DIMITROV (+100kg) and Boris GEORGIEV (-100kg), the latter delivering verse to the crowds on what he expects of the European Judo Championships in two weeks,

We always fight for gold but on this occasion we will absolutely be able to enjoy the fans, to have lots of guests and for everyone from Bulgaria to be happy. To be successful you need to have the patience and continuously work hard, consistent with discipline with your training and never to lose the dream.

For fans and spectators, tickets are available for both days of the European Judo Championships 2022 and can be purchased here. The Bulgarian Judo Federation and the European Judo Union look forward to seeing a great crowd and great judo throughout the three day event in Sofia.