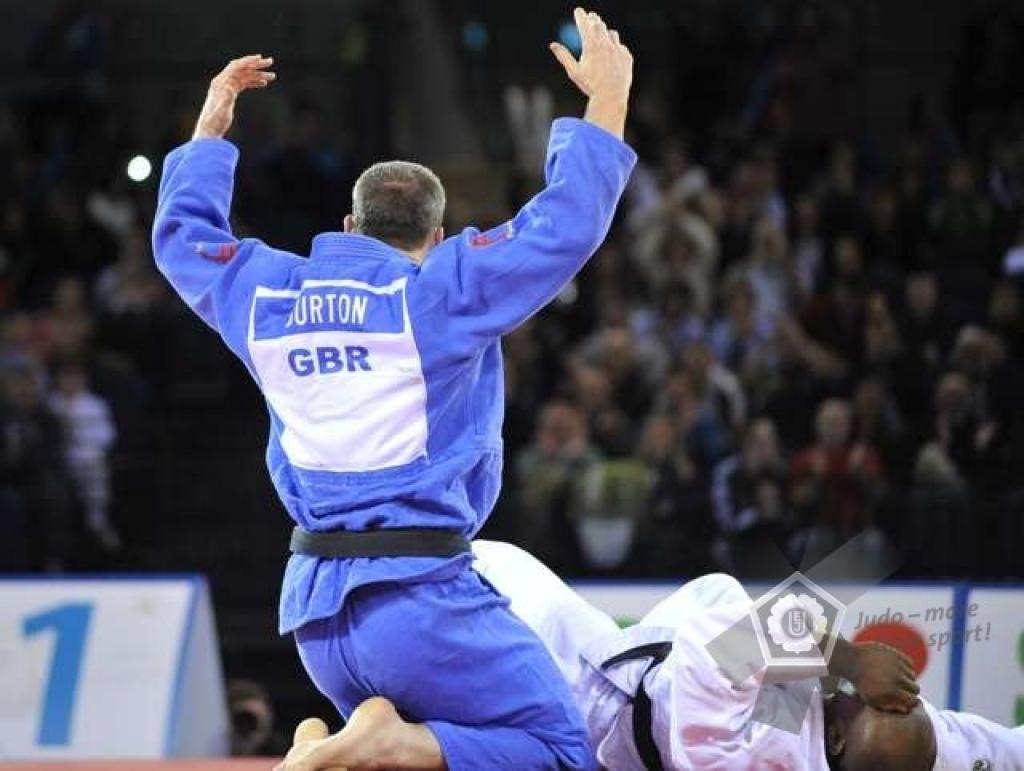 Scotland had a home gold medal to celebrate on day two of the Glasgow European Open, with Euan Burton’s triumph in the -100kg category one of four British medals.

Taking place at the Emirates Arena in Glasgow for the first time, the home for the 2015 European Championships, the crowd enjoyed an action-packed day of judo. Burton, a double world bronze medallist and London 2012 Olympian, was fighting on home soil being based nearby in Edinburgh. The competition was his first European Open in his new weight category (-100kg) in which he hopes to fight at the 2014 Commonwealth Games. The GB athlete started his competition with a win by ippon inside 30 seconds over Andrew Jacobs of the USA. He followed that up with a stunning late throw to beat Portuguese athlete Jorge Fonseca. He took a third ippon win after throwing Australian Elijah Schuurmans then holding him down to secure a place in the final. The final was an all-British affair with Burton facing former Junior World Championship medallist Ben Fletcher. Fletcher, 21, has earlier took a narrow yuko win, followed by an ippon win over Italian compatriots Ardizio and Di Guida. However, Fletcher struggled to get into the contest and almost 90 seconds in was forced to submit as Burton applied a choke for ippon. Commenting on the win Burton said: “It’s nice to win a medal here in Glasgow ahead of the Commonwealth Games. This competition is a step up from my last medal and its nice to win in at an event that British Judo has made pretty special.” “I’ve fought Ben a couple of times, mainly more for fun in Randori, but he’s a really good judo player – up and coming and somebody the British public should definitely be looking out for in the future. To be fighting him in the final is good for the health of British Judo.” The bronze medals in the -100kg category went to Fonseca and Ardizio. Great Britain also took both bronze medals in the -90kg category with Theo Spalding Macintosh narrowly defeating Mark Anthony of Australia by a yuko for third. Michael Horley and Matt Purssey went head to head for the other bronze with Edinburgh-based Purssey coming out on top. The scores remained level until the last minute when Purssey threw Horley for a waza-ari. The -90kg final was an entertaining contest in which Alon Sasson of Israel beat Italy’s Guiliano Loporchio by ippon. Both athletes had earlier scored waza-ari with Sasson also registering a yuko before his winning throw. The -81kg category saw Hungarian Attila Istvan Ungvari take the gold medal with opponent Maxim Buga of Russia withdrawing from the contest through injury. Ungvari had earlier defeated GB’s Tom Reed on his route to the final. The bronze medals were won by Massimilliano Carollo of Italy and Stefan Kuciara of Austria, both winning by ippon. Belgian athlete Benjamin Harmegnies won the +100kg category after beating Daniel Natea of Romania in the final. Natea received hansoku make after collecting four shido. Britain’s Chris Sherrington lost out on bronze, suffering a defeat by Jan Pinta of the Czech Republic by ippon. The other bronze medal went to Austria’s Daniel Allerstorfer who beat Frenchman Pierre Alexandre Robin by ippon. There were seventh place finishes for two other British athletes – James Austin (-100kg) and Tom Reed who lost out to the gold medallist. Watch all photos of Glasgow in our gallery