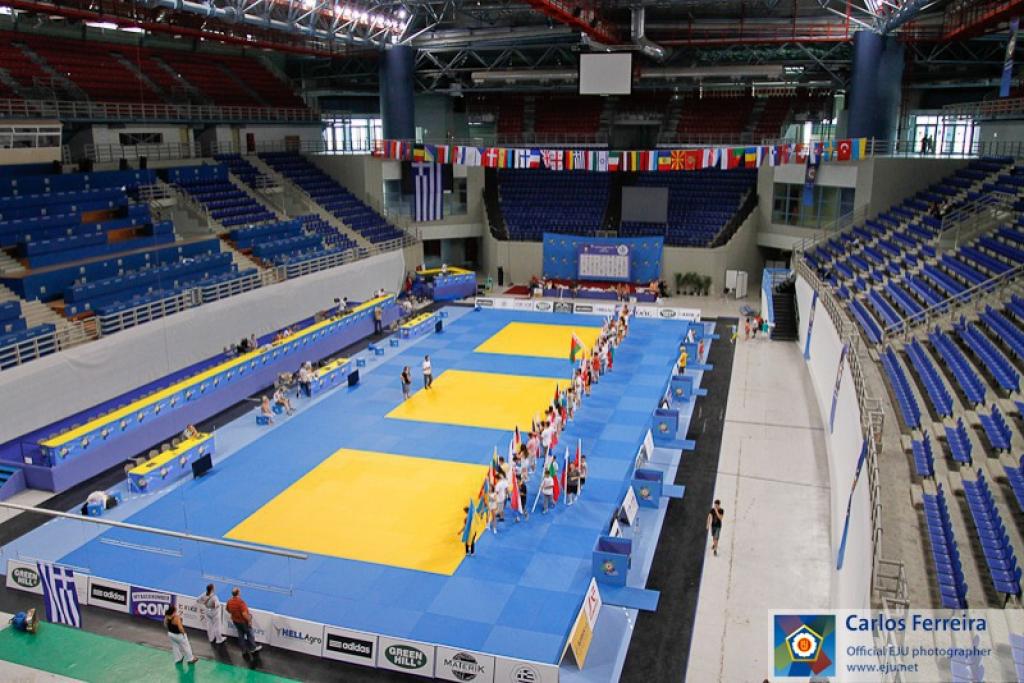 The European Championships for Cadets that begin in Athens on Friday will be staged at the Ano Liossia Sport Arena, venue for the judo event in the 2004 Athens Olympic games and scene of the triumph for Greece ten years ago of Ilias Iliadis. According to Nikos Kerasovitis, Head of the Local Organising Committee, the “packed grandstands, fervent support and the efforts of the Greek judoka, will be the key to achieving the best European U18 championship in history”. Kerasovitis gave a “mini” interview prior to the start of the championships to be staged between 4-6 July. Referring to an earlier evaluation visit of European Judo Union staff to Athens Kerasovitis had the following to say:

“I am completely satisfied with our preparations. Both Martin Poiger, Director , EJU Head Office, and Competition Manager Catarina Rodrigues, were satisfied with everything we showed them during their visit to Athens. They were able to visit the Ano Liosia Sport Arena, the auxiliary spaces as well as the hotels. The stadium meets all the current EJU’s needs and is well equipped for the immediate future. It is the first tournament commissioned by the EJU in our country and their people were very strict, especially concerning the setup of the facility in accordance with the requirements of the EJU, and also the issue of attendance during matches. They are very interested in having a big audience and we aim to make their desire a reality”.

Over 580 judoka from 40 countries will face each other in the Championships Organizationally, the final details have been fine tuned and adjusted, with specific problems being resolved and everything is ready for the hosting of young sportsmen and sportswomen who are expected to give their best to distinguish themselves.

The objective for the hosts on the mat will be success by the Greek side and national coach Nikos Iliadis has set goals for medals and good placings. “Our young athletes are talented and can bring us success, some good samples of which have already been demonstrated in the Balkan League of Xanthi. Being supported by spectators inside our “home”, we will be a major boost to their strength and courage. The 10 male and and equal number of female athletes who will take to the mat, may feel a special burden but I am confident that they can cope with this pressure. We will be preparing in the best possible way at the Sports Camp of Loutraki to be as ready as possible. Our athletes are looking forward to being part of this great “celebration” of judo”.

Τhe preparations for the Championships are now complete and besides the officials of the organizing committee who are working feverishly, volunteers are also alert. More than 100 volunteers have been training daily to offer their services selflessly. These young people aged from 15 to 30, consist of judo fans, students, club athletes, university and college students who will be working from various posts covering any needs that may arise during the event.
The volunteers will be helping the athletes both in the preparation of matches within the facility and also the reception, transportation and various needs of the athletes of foreign delegations.

The promoters of the organizing committee led by Charis Spiliakos have been training the volunteers on a daily basis for more than three hours, giving them guidance and tips to cope successfully with any challenge concerning their posts. The volunteers have already expressed their excitement about this great experience!

Spectators are expected to crowd the Olympic Centre of Ano Liossia as Greek judo faces a huge challenge from both organizational and performing aspects.
Foreign delegations have now arrived, with the athletes of Georgia and Azerbaijan coming first. As for the Greek side, its Government will be represented by Minister of Sports Mr. Ioannis Adrianos who will be attending during the opening ceremony of the Championships, Friday, July 4th, at 5:00 p.m.
The stage is set thanks to the tireless work of the officers of the organizing committee and it is expected to impress as foreign athletes are looking forward to fighting at a facility that has hosted the premier sporting event on the planet.