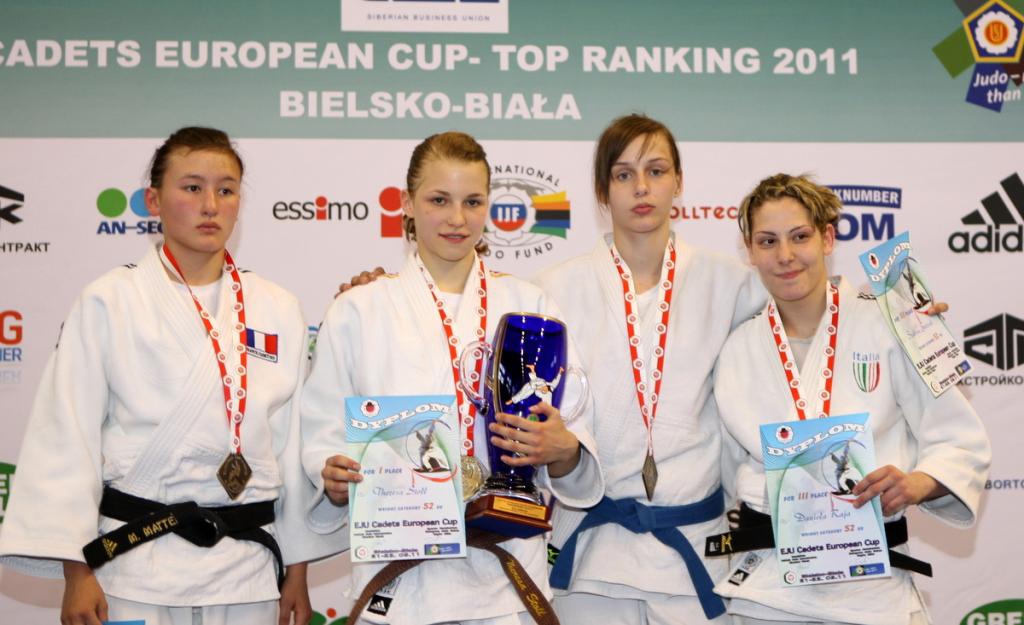 The European Cup for Cadets took place in Bielsko Biała in a beautiful new-built sports hall. The competition was attractive for fans of judo from Poland and other European countries.

At the first day in Bielsko Biała the light weight categories fought for the medals. The gold medals were distributed over 6 nations with France and the Ukraine as winners of two categories. The first category U40 kg women’s division was won by Fatma Gulsoy (TUR), who defeated Evelyne Audiens of Belgium. Third place was for Ivanna Stytsyn (UKR) and Marion Huber (ITA).
U44 kg the first place on the platform went to Evi Vermandere (BEL) who finally won gold after four previous European Cup bronze medals. Silver was for Florine Belle (FRA) and the bronze medal won Daria Bobrikova (RUS) and Nazlican Kilic (TUR) who had already won three gold medals this season but lost to Florin Belle in the semi final.
U48 kg the best contestant was Amandine Buchard from France who won her bout with Anastasia Kasyanova (RUS) . U17 Hungarian Champion Patricia Toth (HUN) won bronze as well as Adele Ravagnani (ITA) who won her second medal this season.
The last youn women’s category U52kg was turning out to be domain of german U17 Champion Teresa Stoll (GER), who won the match against Megane Mattei (FRA). Third place was taken by Daniela Raja (ITA) and Szabina Gercsak (HUN).
Ten young women now won gold in the 10 European Cups for cadets in this category which is highly competitive. It is the only category with 10 different winners.

Watch all pictures in our media gallery here:
https://www.eju.net/media/?mode=showEvent&id=675