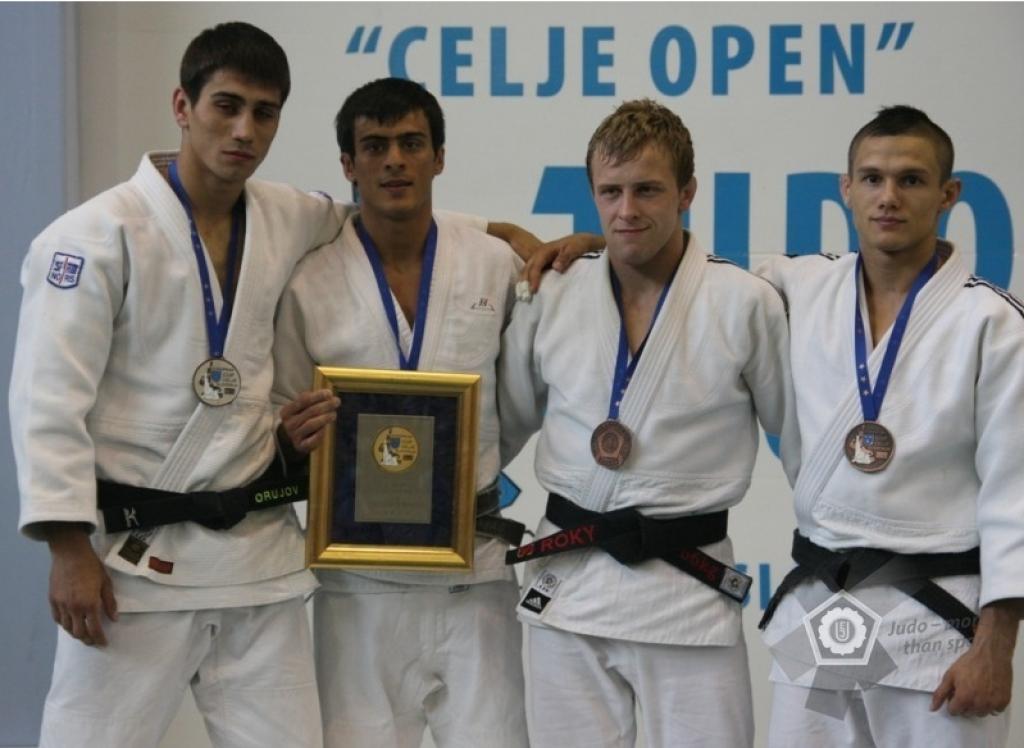 When some of his rivals preferred to fight in the heat, European Champion Georgii Zantaraia (UKR) won the European Cup in Celje as good preparation for the World Championships. Zantaraia defeated Rustam Orujov (AZE) in the final U66kg when the Azerbaijan judoka got hansokumake because of leg grabbing. Zantaraia preferred one category higher as Celje is a good tournament to experiment. In this category where also local hero Rok Draksic was expected on stage, he could not fully realize a golden dream due to his penalty in the semi final against Orujov, but did take bronze after all.
Zsolt Gorjanacz (HUN) won bronze by a nice uchi-mata against Yakub Shamilov (RUS).

Alexander Grigoriev and Stanislav Semenov fought a stable final U81kg, not very attractive as they know eachother quite well. This time Grigoriev won, in Orenburg last year it was Semenov to win the final of a European Cup.
Benjamin Muennich won his second bronze this year at the European Cup, last time in London.
U100kg Adlan Bisultanov (RUS) won the final against Spaniard Alejandro San Martin by osaekomi waza. This year 21-year old Bisultanov also won gold at the European Cup in Orenburg.

In the women’s category U52kg Hanne van Bossele seems to be the successor of Ilse Heylen. Although Heylen is still Belgium’s number one Van Bossele set some good records recently by taking bronze at the European U23 Championships last year and bronze at the European Cup in London. On Sunday she added her first gold medal at a European Cup. The Belgian champion defeated Slovenian Petra Nareks who was favourite by the crowd. Van Bossele’s last point was a second waza-ari after a successful counter attack of Nareks Uchimata.

The category U70kg was dominated by Germany, winning gold, silver and bronze. Again Barbara Bandel showed that her victory in Lisbon was not a single success. In the final in Celje she defeated Anne-Kathrin Lisewski on the ground by a choke. Melanie Gerber and Hungarian Franciska Szabo won bronze.

Another successful experiment was done by Linda Bolder. The Dutch won the category U78kg while she is still in the qualifying process for the U70kg class. Bolder suffers a lot of competition in her country from Edith Bosch and Kim Polling and today’s experiment was launched successfully by taking gold. Bolder will nonetheless continue in her U70kg category.
Ana Velensek collected Slovenia’s second silver medal against the strong powerhouse. Although the match was equal for a long time, it was Bolder who scored a yuko in the golden score by tani otoshi.
Another Dutch won bronze; Iris Lemmen as well as Ukrainian Victoria Turks.

Watch great pictures by Mario Krvavac and review the results: