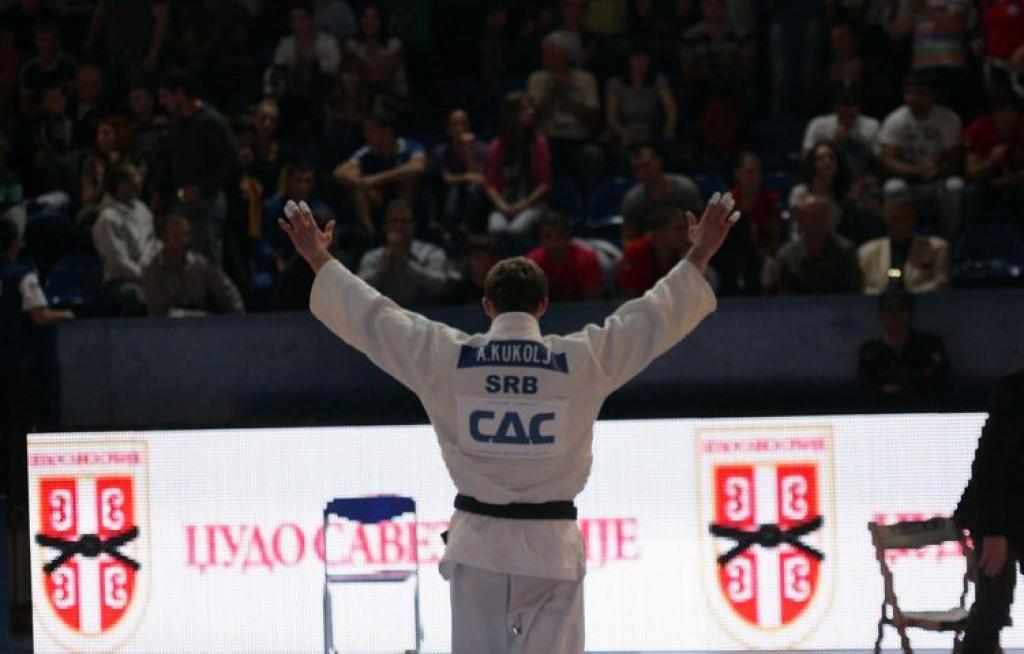 Hungary and Slovenia have divided the gold medals at the European Cup for Seniors in Belgrade. Both nations were able to win four categories. Hungary even had two all Hungarian finals and won nine medals in total.
Especially in the male categories Hungary dominated the event winning three divisions. In the men U66kg out of 38 participants Martin Vegvari and Gabor Hagyo qualified for the final, won by Vegvari. The Hungarian booked his first European Cup victory in the senior class.

Laszlo Csoknyai (HUN) was victorious over Giovanni Carollo of Italy in the category U81kg. Csoknyai won his second European Cup of the season, previously he won in Prague. Miklos Cirjenics was the third Hungarian to win. He defeated Jadranko Jahic (BIH) in the final U100kg and improved his silver medal of last year in Belgrade by taking the gold this time.

The other four categories the gold was distributed over Slovenia,
Finland and Italy and home nation Serbia. The homecrowd saw a strong Aleksandar Kukolj again U90kg. Again he won an international tournament after winning the Serbian title this year, The World Cup in Lisbon and bronze at the World Cup in Rome three weeks ago. In the final Kukolj defeated Lorenzo Bagnoli of Italy.

The Italians won gold +100kg by Alessio Mascetti who defeated Daniel Natea of Romania. Mascetti won his second European Cup this season, he also won in Istanbul in July.

17-Year old Rok Plesnik won U60kg in the final against Czech David Pulkrabek. U73kg 44 participants came to the start and Eetu Laamanen booked a precious victory. The Finnish Champion won his first European Cup. This year he was unlucky with two seventh places in Orenburg and Tampere. For Finland it’s the first international senior victory this year, besides regional tournaments. Good work by the 24-year old Laamanen and a good motivation for the Finnish men. The women usually set the tone over the last years with good results for Sundberg and Ylinen.

Women
In the women’s division Slovenia won three out of seven categories. U63kg Nina Milosevic defeated both Vlora Bedzeti as Tina Trstenjak as direct rivals for next year’s positions for the World Cups and other international events. Slovenia has a wealth of talent in these categories and with Urska Zolnir as inspiring (club) coach the level will only increase. Anka Pogacnik defeated Kristina Marijanovic (CRO) in the final U70kg. Ana Velensek defeated another Croatian; Ivana Maranic 78kg.

U48 the final was completely Hungarian. Lilla Erdelyi defeated Renata Kiss. At the Hungarian Championships Kiss won the senior title this year, Erdelyi won the U23 title in the final against Kiss, so good competition behind Olympic medallist Eva Csernoviczki.

Also good competition for Romania’s outperformers Andreea Chitu (U52) and Corina Caprioriu (U57). The two categories in Belgrade’s European Cup were captured by Alexandra Florian (U52) and Loredana Ohai (U57). Florian defeated Odette Giuffrida in the youngest medalists final of this weekend, 17 and 18 years.

Larisa Ceric was the expected winner in the plus category of a poule system.

Fifteen nations won a medal this weekend and again Montenegro claimed two medals. Since the European Cadet Championships they have organized in June, the nation is gaining power in international judo with promising results.