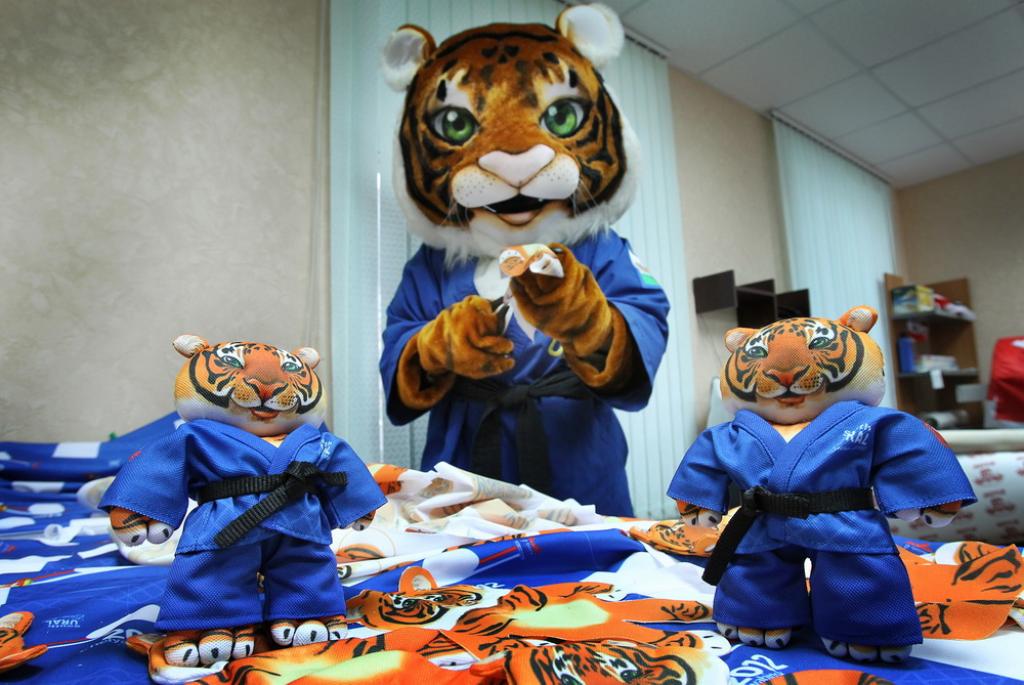 Chelyabinsk craftsmen began carrying out the unusual order: they have to make 4 thousand tiger dolls. Handmade soft toy in the form of the European Judo Championship mascot – Tiger Zhorik – will be one of the branded souvenirs for upcoming tournament.
Preparing for the judo championship in Chelyabinsk is in a full swing. Now organizers have started making souvenirs. More than a dozen types of commemorative gifts will be made by skilled South Urals craftsmen. Small tigers dressed in a kimono one after another are coming from the workshop.
The manufacturing process requires a lot of effort. Sublimation printing that is used in creating the mascot allows to receive high-quality image. Firstly, picture of the future toys are transferred to a special material named pique. It is a kind of textile which is used in sports clothing production. After that, the patterns are cut and sew together.
Then craftsmen stuff the toy with the filler and manually complete little details – make the form for paws, ears and muzzle. Finally, the tiger is put on bright blue jacket with the symbol of the coming season. That soft toy is made of environmentally friendly materials and safe for small children.
Four thousand soft toys will be produced by March. They will be made not only as gifts for participants and guests of Euro 2012, but also for sale. Anyone will be able to buy a small championship mascot.
«We are making all this tigers with love. I’m sure everybody will like them. They will become nice gifts for the competitors, guests and children. The toy is safe for kids. All materials are certified. Inks that used for printing images are based on water and don’t contain harmful solvents and chemicals», – says the craftsman Natalia Link.
The 2012 European Judo Championship will be taking place in Chelyabinsk from April 25th to 29th. Competitions will be held in Ice Arena «Tractor» which can accommodate more than five thousand fans. Athletes from 50 European countries will come to the championship. This is a crucial tournament before the Olympics. So the Southern Urals will gather the strongest sportsmen. Championship mascot – Tiger Zhorik – will bring them luck and success.

Watch photos of the production of all gadgets here:
http://bit.ly/wtcfAd

Funny warmup videos for Euro2012 can be found here: