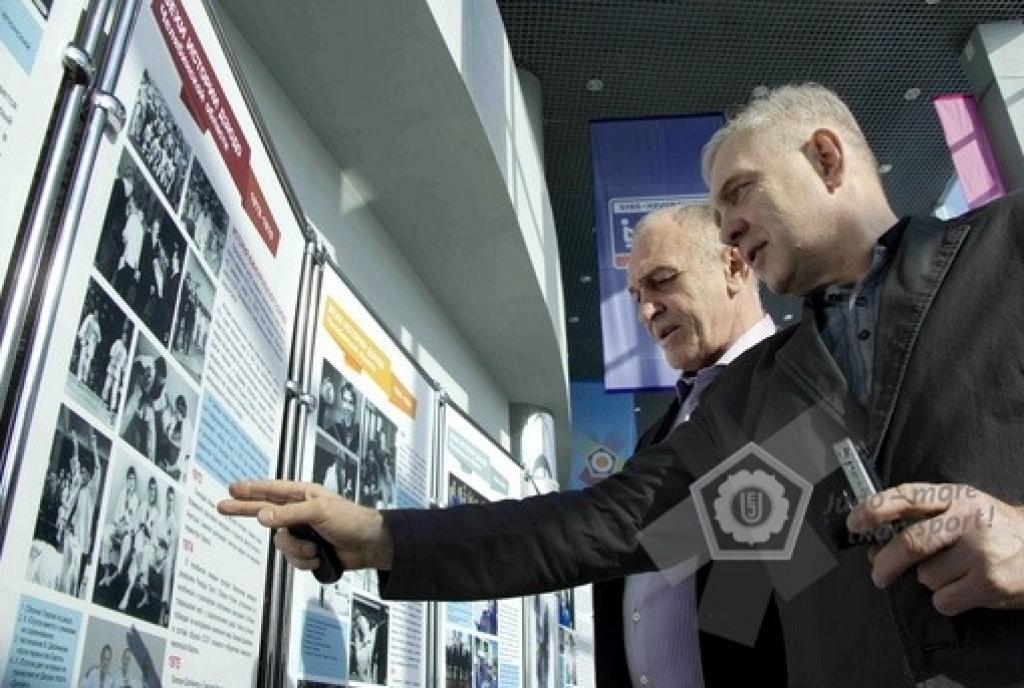 Chelyabinsk hockey fans see the changes that take place in the Ice Arena «Tractor»: mobile exhibition devoted to the 40years history of judo in the Soviet Union and Russia has opened in «Tractor» this week.
Eight booths installed in the foyer of the Arena shows the achievements of our countrymen at the international competitions. Part of the exhibition is devoted to the basic principles of judo and its philosophy.

The official date of Judo birth in the USSR is considered to be February 1972, when the Judo Federation was created. In the South Ural development of this sport is associated with the name of legendary coach Haris Yusupov. A separate section of the exhibition is devoted to him.
Exhibition was opened by vice-president of the Russian Judo Federation Dmitri Chernykh. He cut the red ribbon and said that athletes on the stands had made a significant contribution to the history of not only Chelyabinsk judo, but also Russia as a nation. European Championship in Chelyabinsk is a huge honor and responsibility for organizers and athletes who will undoubtedly have to prove themselves at the home tournament.

Firstly the exhibition was examined by athletes, coaches and veterans of judo.
“The Chelyabinsk people are able to trace the milestones of the judo history. The exhibition will be interesting for people who love Judo not just as a sport, but as a life philosophy. The exhibition includes 14 photo pictures of European Champions from South Ural. Among them Gennady Ivshin, Victor Bethany, Yuri Stepkin, Ivan Pershin, Zafar Makhmadov, Mansur Isaev, and our hope – Dmitry Zuev. That is the cream of the Chelyabinsk Judo”, says the vice-president of the regional judo Federation Dennis Lapotyshkin.

“Unfortunately very few athletes know the history of judo and names of honored sportsmen. Moreover not everyone studied the philosophy of this sport. This exhibition is very informative, even I learned a lot. And I’m sure it will be interesting not only for athletes, but also for the audience, because judo is getting more and more popular every day”, the champion of the 2010 European youth tournament Dmitry Zuev says.
Very soon the English «twin» of exposure will appear in the Ice Arena.
Organizers hope that after April 2012 the exhibition will have one more booth that will be devoted to the European Judo Championship in Chelyabinsk, and the chronicle of the South Ural’s Judo will include new names of the athletes.

A movie about the judo history of Russia and Chelyabinsk region was shown at the opening ceremony of the mobile exhibition.
“Judo is not a mass sport, therefore it’s philosophy understood only by specialists. The film puts the fans into the sport. The upbringing of a healthy generation is a task for the city administration and the governor of the Chelyabinsk region. And I mean all kinds of sports, not only judo”, says vice-president of the Russian Judo Federation Dmitri Chernykh.

The European Judo Championship in the capital of the South Urals at 26-29th of April will be the last tournament before the Olympic Games in London. More than 500 athletes from 50 countries will arrive to Chelyabinsk for the Olympic licenses.

Watch the photos belonging to the opening of the Judo Exhibition:
http://bit.ly/zrYD3L