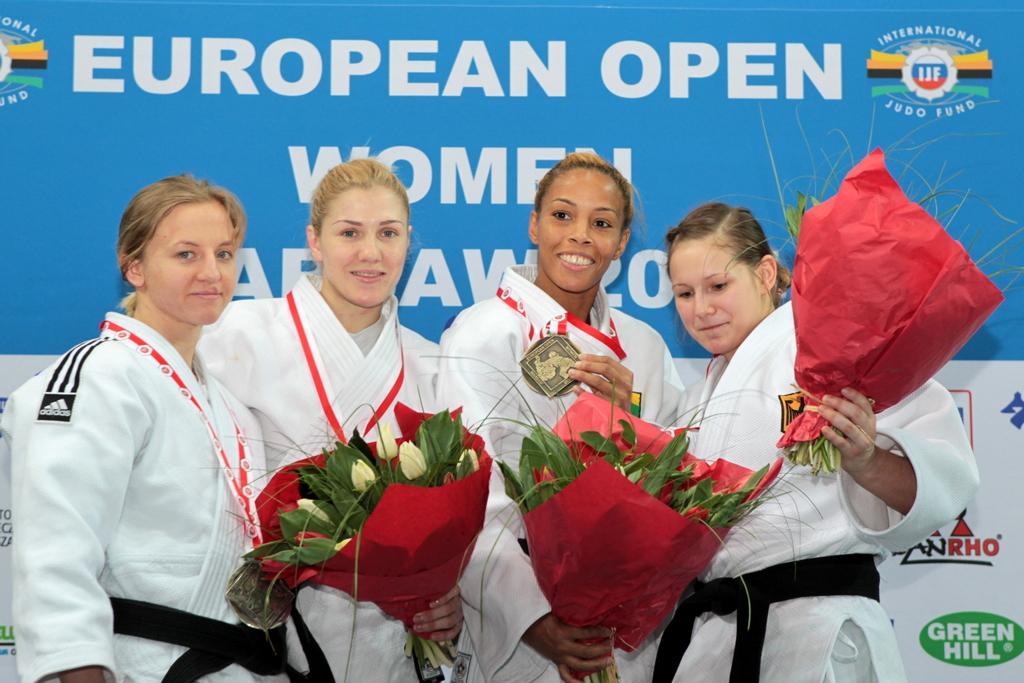 The home crowd at the European Open in Warsaw cheered for a silver medal for Ewa KONIECZNY, it was silver with a golden edge. The gold, with golden edge though was Maryna Chernyak.

The Ukraine started well today and took s second medal, bronze for Tatyana Levytska U52kg. The category for U48kg was a pick start for the host nation and good stimulation for the rest of the team that will have more medal changes on Sunday. Bronze was for Taciana Lima (GBS) and Sonja Wirth (GER). Konieczny defeated Diana Kovacs (ROU), Tamara Silva (SUI) and on Minsker on her way to the final. Maryna Chernyak beat Nakhaenka (BLR), Sonja Wirth and Taciana Lima to get to the final. The French dominated the category U52kg but in the end it was Petra Nareks of Slovenia who claimed the gold medal. The French had good papers with two former European Champion in Penelope Bonna and Annabelle Euranie. The tall French came back after giving birth to two children and used her 1.73m to keep her opponents of her back and scored herself via her left uchimata. It gave her bronze against Barbara Maros (HUN). Tetyana Levytska defeated Alexandra Florian (ROU) in her last bronze medal bout. The final was between Penelope Bonna and the experienced Nareks. Although Nareks wasn’t European Champion, she gained 6 European medals and 26 World Cup medals. Today she added the 27th and her tenth victory. Bonna was surprised by the good groundwork of Nareks, a weapon that Bonna used to get to the final. Telma Monteiro was the highest seeded player in advance ranked ninth at the World Ranking list U57kg. It was not a surprise she took the victory, in fact the medallists were not a surprise but that was simply based on their reputation. Monteiro dominated during the day with quick decisions and a range of varying throws and groundwork. Quick, not dirty and efficient leading to Telma’s first victory since February 2013 in Sofia. Recently we already saw a good Monteiro at the Challenge between Europe and Asia, stating that she is capable to beat the best. In the final Monteiro fought against Verhagen who gave her good resistance. Her assignment was to keep her in the match halfway and see what the joy of being in the final brings. Verhagen suffered a tough period and this final was already a good motivation to proceed to get back. Verhagen was able to keep Monteiro of her back, but got penalised. Also in two other matches she lost to Monteiro by penalties, also this time. However no doubt that Monteiro was by far the best today. Monteiro defeated Martina Lo Giudice of Italy who reached the final by defeating Swiss European Junior Champ Fabienne Kocher in the quarter final. Verhagen defeated Helene Receveaux in the semi final in an exhausting fight over 8 minutes. It was completely equal and Receveaux was close in a match that could have been a final, but Verhagen struck with one devastating attack. Receveaux defeated Emilie Amaron for bronze. The Swiss had a good day and showed courage judo, but came short for bronze. Larissa Csatari, the third swiss took bronze after beating Lo Giudice. Watch the photos online in our media gallery.