China and France lead the medal dance in Prague 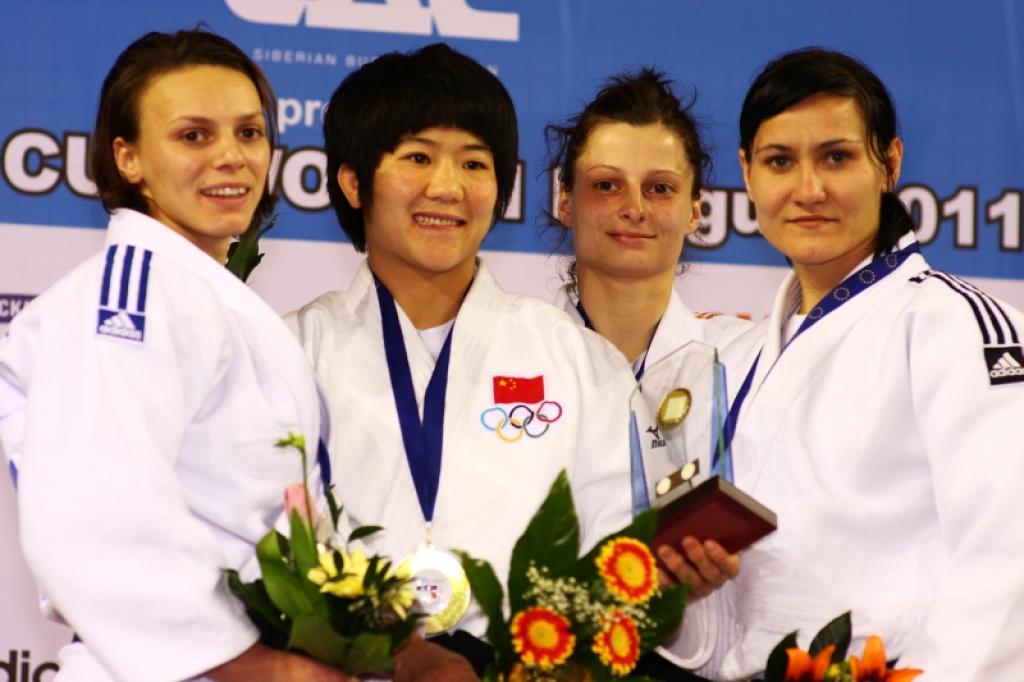 China has won two gold medals at the World Cup in Prague.
The event organisers set a record with 41 Countries from all 5 continents and 247 athletes.
In the Czech capital the Chinese were represented in three out of four finals. The category U63kg was an all Chinese final. The last time this happened was last year at the Grand Prix of Qingdao O78kg, outside China this was a unique happening.
The experienced Xu Yuhua won gold and her second major international World Cup since she won the Grand Prix of Abu Dhabi last year. The Asian Champion of 2006 defeated her country woman Lin Mei-Ling (20 years). The 27-year old Xu who represented China at the Beijing Olympic Games and the 2010 World Championships was never able to win the major prices. Last week in Düsseldorf she finished fifth as well as in Baku at the IJF Masters.

The bronze was for two European ladies: Dutch Esther Stam who won her 6th World Cup medals and Anne-Laure Poli of France who her 7th.

China won another gold medal U52kg by He Hongmei who defeated Andreea Catuna of Romania with seoi-nage into ko-uchi-maki-komi. Catuna beat Mareen Kräh in the semi final who bronze after all when she overcame Aynur Samat (TUR).

He Hongmei on her victory:
“This victory means a lot for me. The toughest opponent was Forciniti of Italy in the semi final. She is very strong and moves very fast. After defeating her I felt confident to win the final. I was quite relaxed and managed to score with my favorite combination seoi-nage into ko-uchi-maki-komi.”

Chinese coach Zhao on the performances of China:
“So far I am satisfied with the performance of our girls. Particularly XU (63 kg) showed good judo here. I also liked the performance of HE (52). I expect that tomorrow our team will win some more medals. The competition here in Prague is enormous. We however have a lot of hard work in front of us to succeed in London.”

In the category U57kg a complete French final took place in Prague. Sarah Loko defeated 2009 World Champion Morgane Ribout.
Ribout led by waza-ari in the final against Loko but lost less than a minute to go being thrown for ippon with tai-otoshi. Loko received the ippon trophy for the fastest ippon scored in five seconds.

Loko booked her third World Cup win ever after Qingdao in 2009 and Cairo in 2010. This year in Paris she finished fifth when she lost to Monteiro (POR) where Automne Pavia took this important home victory. Now Loko is again in the race for important upcoming selection moments with her win over Ribout another major rival.
Good old Isabel Fernandez who turned 39 this month won the bronze in Prague, an all time record for Europe. Fernandez threw Karakas for ippon with te-guruma in her bronze medal fight and lost only to Ribout by yuko.
20-Year Tetyana Levytska won bronze of Ukraine, her first ever World Cup medal. Fernandez won her 48th, also an all time record.

Ana Hormigo was able to stand her Chinese opponent and defeated Wu Shugen in the U48kg final with sumi-otoshi.
Wu, another experienced Chinese lightweight represented China at the 2008 Olympic and 2010 Tokyo Worlds and was Asian Champion last year defeating world champion Tomoko Fukumi. Quite a performance of Hormigo who can celebrate her 10th World Cup medal tonight but her first ever gold medal, with all respect at the age of 29. Well, young enough for a latest trick in London. In Beijing the Portuguese finished 7th, slightly better than Wu to complete the circle.