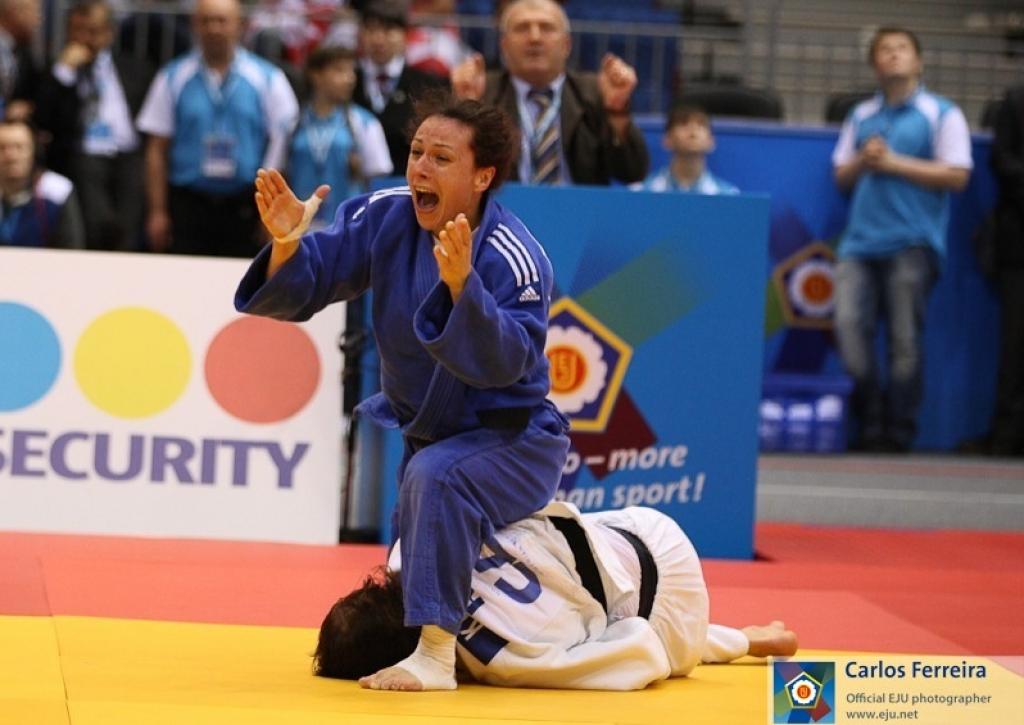 The victory of Romanian Andreea Chitu was a big surprise. In the final U52kg she threw double European Champion Natalya Kuzyutina in a devastating Ippon and took the second gold medal for Romania at the first day of the European Championships in Chelyabinsk. The last time this happened was in 2004 at the Europeans in Bucharest when Dumitru and Ioana Aluas won the same categories as today.
Chitu won the European title U23 in 2010 in Sarajevo in the category U57kg but since she stepped back one category again she is extremely successful. Between 2006 and 2011 she fought U57kg but since a July last year Chitu is fighting U52kg. She won a bronze medal at the World Championships in August last year and won the World Cup in Korea last December. So far this year she wasn’t very successful competing in many events though: Sofia, Paris, Budapest, Duesseldorf and Warsaw only taking a poor seventh place in Poland. So her victory today was an outperformance of high level. In her home country Andreea Chitu should never be a problem for double European Champion Kuzyutina. But the small Chitu hit at the right moment with a devastating score finishing the match immediately.
It wasn’t a present though as Chitu defeated serious opponents such as Spanish Ana Carrascosa in her semi final and German Mareen Kraeh in the quarter final. In her first match she defeated Priscilla Gneto, an outsider for today’s title and Rosalba Forciniti (ITA) is runner-up of the 2010 Europeans, so not an easy road to the final. Her final opponent had to deal with the Romanian flow:
“I felt really inspired by Alina winning the gold. I saw the medal ceremony while I was waiting to get out, and I thought I really wished to be there, too. It is like a dream come true. Last year in Paris at the World Championships I fought in Bercy in Paris, so I already had experience with a lot of spectators. I didn’t feel the pressure of the crowd. I hope to qualify for the Olympic Games now.“

Maybe the contrary was the case for homeplayer Kuzyutina: “I really wanted to win here in Russia. Maybe I wanted it too much. I could have won the final match. At the end, I opened too much to attack and then my opponent used it to her advantage. This was the last competition before the Olympic Games, and each competition is an experience, no matter if you lost or won, but loosing is a sad experience.“
Kuzyutina already tasted that sad feeling at the Grand Prix of Düsseldorf this year finishing second. The only judoka who lost the final of the 2008 European Championships and won a medal in Beijing was Ruben Houkes who was doing the commentary today in the hall.

Two German women won a bronze medal. The German mentality helped Romy Tarangul today, pumping up the positive vibes before each match she was able to defeat Ana Carrascosa in her last match after she lost to Kuzyutina in the quarter final. “This was the revenge for last year when I lost in the bronze medal match to Carrascosa. It meant a lot to me to win this time. Being fifth is always so unsatisfiying and I have had quite a few fifth places. Anyway, it is always a goal to take a medal.“ Tarangul referred to last year’s Europeans in Istanbul and the World Championships in 2010 in Tokyo. She won a silver medal at the 2008 European Championships but finally won her last match.

Another tiny German women is Mareen Kräh who surprisingly defeated Ilse Heylen of Belgium who had beaten her four times before. But Kraeh lost her next match against Chitu but came back in the repechage defeating Joana Ramos and the unfortunate Spanish Laura Gomez who led the match despite a terrible headache due to a slam with her head on the ground after 10 seconds. It was a tough match and everything could happen. Gomez hold the arm of Kräh and made a throw blocking the arm of Kräh and was awarded with hansokumake ending the match for Gomez. The Spaniard couldn’t believe it and wasn’t aware of the danger and could only cry of disbelieve what just happened in a stormy match.

Kräh recovered from her forced elbow and said “It is always nice when there are two of us (Germans) on the podium. I fought Laura Gomez many times and she is a strong opponent. This bronze medal is a nice success for me as I made the podium again after six years.“ Kräh won bronze in 2006 in Tampere at the age of 22, now 28. Since the last five years she faces the competition of Tarangul and new German talents are knocking on the door.