Clean sweep for Georgia U81 for home crowd 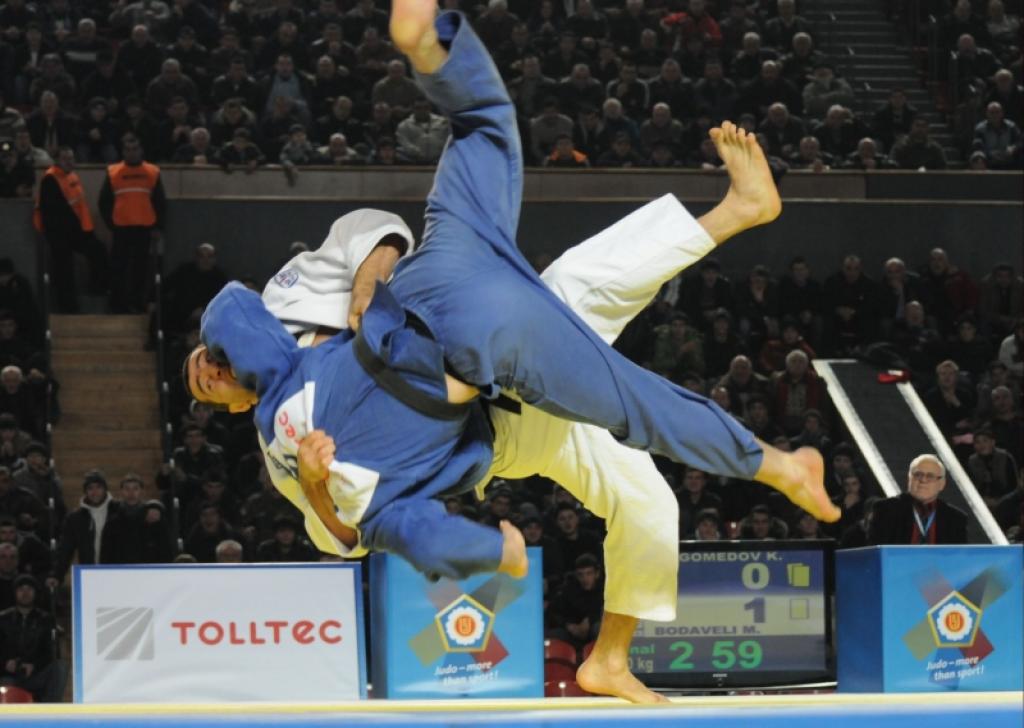 A clean sweep for Georgia in the U81kg category where all four participants took a medal while no foreigner was able to come in between and beat anyone of the Georgians.
The final between Levan Tsiklauri and Khvicha Khutsishvili.
In front of the home crowd Tsiklauri won convincing but took it easy in the final until he found his moment to grab his opponent ne-waza to win his first ever World Cup. Last year he was runner up in Tbilisi. The 24-year old Georgian already won a bronze medal in Tbilisi in 2002 at the age of 16.
The last time that a country won all medals at an international event was quite recent when Japan took all the medals in the U48kg class at the IJF Masters in Suwon.

Shota Khabarelli must have enjoyed the final U9kg when Mindia Bodaveli threw Kamil Magomedov. The throw where he became famous about was now showcased by Bodaveli and everybody gave Bodaveli a standing ovation in the hall. Also carefully watched by Olympic Champion Irakli Tsirekidze who recently said to retire from international judo after the Tournoi de Paris this year and who congratulated his old teammates with the excellent performances.

The final U100kg was between Magomed Magomedov (RUS) and Revaz Chikoidze (GEO), but Chikoidze was injured and only appeared on the tatami to bow.
For the bronze U100kg Nodar Metreveli (GEO) managed to control Hakob Arakelyan (ARM) with one arm and do the same kind of technique, a take over of his opponent for an ippon. David Loriashvili (GEO) won the other bronze against Jean Vanbever (FRA) with two wazari’s.

A spectacular bronze medal fight when a both mats the two ippons where scored in the same second and the crowd enjoyed the Georgian medal for Zviadi Khanjalashvili. Renat Saidov (RUS) beat Emil Tahirov (AZE) for bronze in the same minute.

But the final was won by 20-year old Japanese Masaru Momose who beat Adam Okroashvili with Harai Goshi after 90 seconds easily. Momose waited for his moment to strike and took the gold and his third match of today.

Georgia dominated the medal tally with four gold medals and four silver, and 15 medals in total! Russia and Japan took the other titles in Georgia. But the home crowd was spoiled with good successes of their own team.